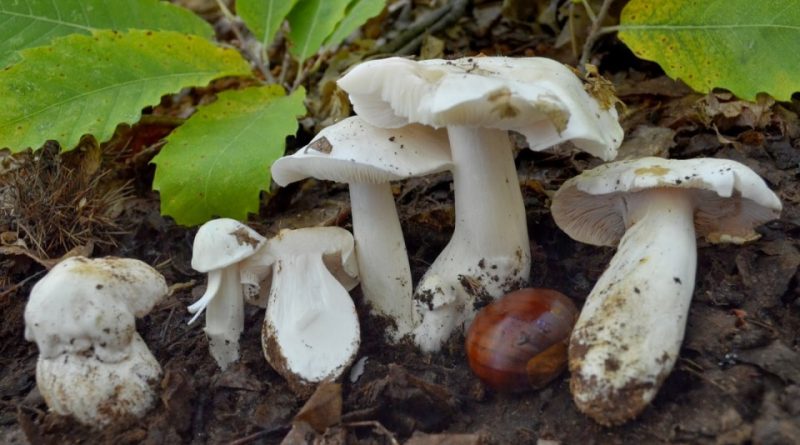 This mushroom (Tricholoma columbetta (Fr.) P. Kumm.) Is a basidiomycete fungus belonging to the Tricholomataceae family.

Systematics –
From the systematic point of view it belongs to the Eukaryota Domain, Fungi Kingdom, Basidiomycota Division, Basidiomycetes Class, Agaricales Order, Tricholomataceae Family and therefore to the Tricholoma Genus and to the T. columbetta Species.
The term Agaricus columbetta Fr .. is synonymous

Etymology –
The term Tricholoma comes from the Greek ϑρίξ, τριχóϛ thríx, trichόs hair, hair, braid and from λῶμα loma edge: with down along the hem. The specific epithet columbetta, according to some authors is the diminutive of colúmba colomba, colombella: of the color of a small dove; according to others it derives from the name, in ancient French, columbette with which the Swiss botanist Johann Bauhin (1541-1613) called the Tricholoma columbetta.

Geographical Distribution and Habitat –
This mushroom is a common, but not abundant, mushroom that grows in various types of deciduous forest, preferring Oak, Chestnut and Beech, on siliceous ground.
It is found in the period from late summer to autumn. 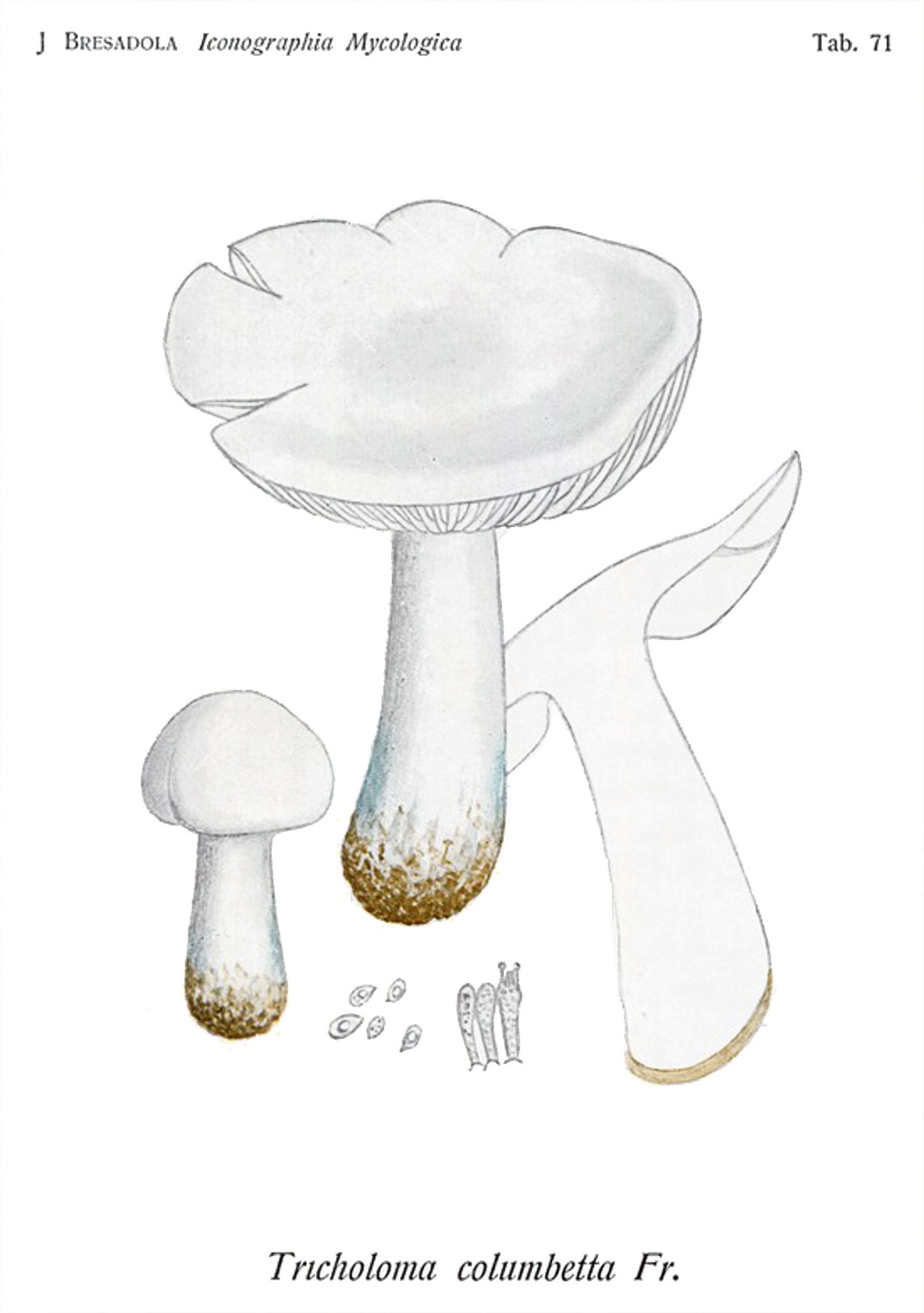 Recognition –
The Tricholoma columbetta is recognized by the cap of 6 – 10 cm in diameter, of a white-white color, sometimes with the center spotted of various colors and with a bell-shaped or convex spianato shape, often umbonate, quite fleshy, with a very wavy edge and easily separable cuticle, which appears slimy in wet and silky weather if dry.
The lamellas are dense, uneven, low, eroded near the stem, slightly serrated and white in color.
The stem has a cylindrical shape, although sometimes thinned at the base, often curved, fibrous and full, with a white color with green or blue areas or more rarely reddish to the foot.
The flesh is firm in the cap but very fibrous in the stem, with a typical white-candid color, unchanging and with a faint odor, vaguely of flour and sweetish flavor with a slightly spicy aftertaste.
Under the microscope, spores of 5-7 x 4-5 µm are noted, white in mass, smooth elliptic, not amyloid.

Cultivation –
Tricholoma columbetta is not a cultivated mushroom.

Uses and Traditions –
This mushroom probably owes its name to its pure white appearance in all its parts, with a silky and satin cap, with characteristic pinkish or more frequently greenish spots, not always present, at the base of the stem.
Since in the genus Tricholoma there is no lack of albino forms, as for example in the case of Tricholoma portentosum with a completely white cuticle, which can become similar to Tricholoma columbetta for the fibrils on the cap and the farinaceous odor and with which it can be exchanged.
However it is difficult to confuse it with toxic species, if we observe the characteristics that distinguish it; in fact the presence of the typical blue-green stain at the base of the stem, the lack of strong smell and the spicy taste should avoid the confusion with the Tricholoma album.
The lack of ring and volva avoid confusion with toxic fungi of other genera (Amanite, etc.).
Tricholoma columbetta is a fungus of good edibility even though it is little known by collectors.

Preparation Mode –
Tricholoma columbetta, in general, like almost all mushrooms, is suitable for preparation in a pan, as long as it has been first of all cleaned properly and passed to a preventive boiling. The boiling technique, in fact, is recommended regardless of the way in which the mushroom will be cooked definitively. However, it is better to discard the stem of this fungus as its flesh is quite fibrous.