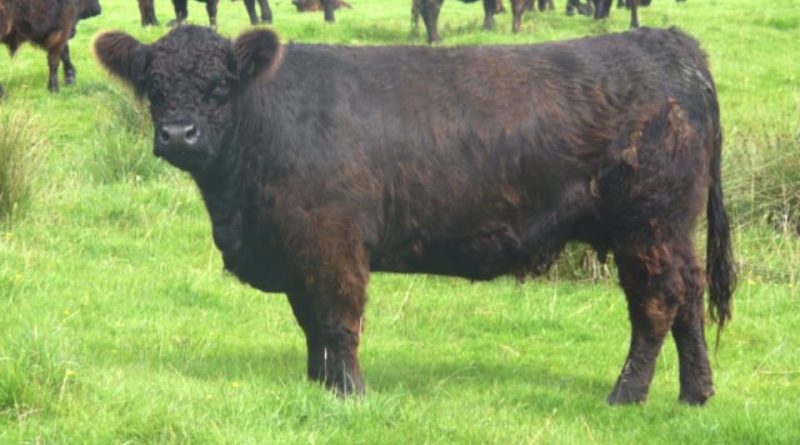 The Galloway is a bovine breed (Bos taurus Linnaeus, 1758) originally from Scotland with a prevalent aptitude for meat production.

Geographical and area distribution –
The Galloway cattle breed is a breed bred, in addition to Scotland, in various parts of the world. It was exposed overseas in 1853 in Canada and, later in the United States in 1882 and in Australia in 1951. Today it is believed that the number of heads of this breed is less than 10,000 cattle in the world, most of which are bred in Northern Europe, particularly in Scotland. Instead, the breed is rarer in the United States and the Livestock Conservancy classifies it as an “under observation” breed.

Origins and History –
The Galloway is one of the oldest beef cattle breeds in the world and takes its name from the homonymous county in Galloway in the south-west of Scotland, where it originated in the 17th century.
The Galloway is one of the oldest British breeds. The origins of this breed are different: according to some scholars, the ancestors would have arrived in Scotland by means of the Norwegian invaders, who would have brought a horned breed from Argentina; according to others this breed had horns until the 18th century.
Originally there were many variations within this breed, including many different colors and coats. The original book of the herds of Galloway cattle recorded only black cattle, but the recessive gene of the red color of the coat often appeared within the population; so it was however decided that these Galloway specimens were also admitted in the genealogical book. Consequently, even if black is still the most common color for the Galloway breed, there may also be red coats with different shades.
We need to get to 1877, the year in which the Galloway Cattle Society was established and to 1878 for the establishment of the Herd Book.
This breed was very successful especially around the 50s of the last century because the beef market required livestock with low feed requirements and high quality meat production. Subsequently, with the crisis due to BSE (Bovine Spongiform Encephalopathy), better known as “mad cow disease”, the export ban occurred in 1990 even though there were no cases of BSE found in Galloway cattle. This fear has obviously had repercussions on the breeding of this cattle with a contraction of the bred heads.
In the following years there have been great changes related to the requests of animals with larger sizes but, today, the original characteristics of the breed have returned very much in demand again; factor linked to the need to obtain high quality meat that requires low production costs.
Today the Galloway breed is considered a minor breed but highly bred especially in Scotland.

Morphology –
The Galloway is a breed characterized by a coat with a uniform color, predominantly black, but sometimes tending to yellow-gray or red-brown, with hair tendentially long and curly in some areas, especially on the head and neck. This thick layer of water-repellent hair isolates the body of these animals very well from the cold and damp climate of the area without the need for a thick layer of fat that would otherwise create little liking for slaughter.
It is a race without horns.
They are animals of reduced structure and very muscular with females 120 cm high and weighing 450-500 kg and bulls between 750 and 850 kg. The birth weight of a healthy calf is about 160 kg.

Production aptitude –
The Galloway is a bovine breed with a prevalent aptitude for the production of very appreciated meat for particularly tender meats.
Despite the customary use of the breeding of these animals for meat production, there are Galloway farms that are destined for the production of cheese as a beautiful historic county of Cumberland located in the north-west of England.