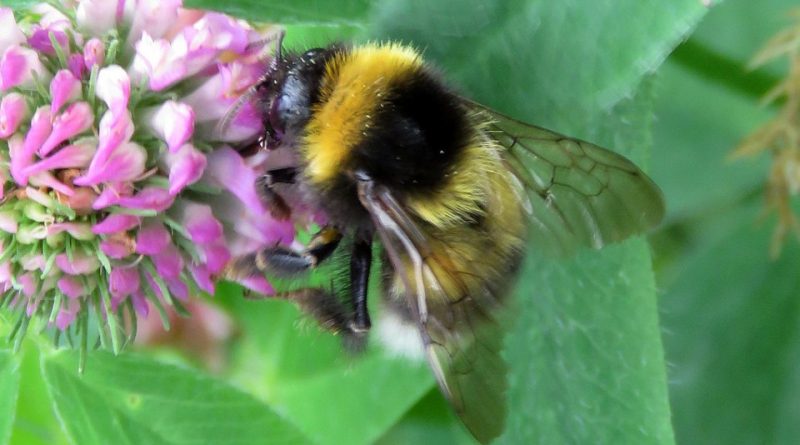 The garden bumblebee (Bombus hortorum Linnaeus, 1761) is a hymenopteran insect belonging to the Apidae family.

Geographical Distribution and Habitat –
The garden bumblebee is widespread in a wide area that embraces the Palaearctic ecozone. Spread throughout much of Europe, up to 70º N (Scandinavia, south of the tundra), where its distribution reaches Iceland, where it was probably introduced. To the south, it is present in the center of the Iberian peninsula, in southern Italy, in northern Turkey.
Its spread extends in northern and central Asia through Siberia to the Altai mountains and, in the south-east, to the north of Iran. In 1885, it was introduced in New Zealand, where it still exists, but without being particularly common. It is also found in America, particularly in Florida. In Great Britain it is present in the entire region, including Orkney and Shetland.
The typical habitat of the Bombus hortorum is that of the prairie environments with abundant flowers which it can feed on.

Morphology –
The Bombus hortorum is a bumblebee of considerable size. The queen reaches lengths of 17-20 mm with a wingspan of 35-38 mm; the workers and the males are slightly smaller and the males have no sting. This insect is characterized by a black livery with a yellow band between head and chest, a narrow yellow band on the scutellum, and a third yellow band on the first and second tergite; the tail is white. It has a very long tongue, compared to other species of bumblebees, which reaches over 15 mm, with which it collects nectar, especially of flowers with greater length.

Attitude and biological cycle –
The Bombus hortorum is a pollinating insect of numerous floral species, including the Barlia robertiana orchid, a non-nectar-like species that however hosts numerous colonies of the aphid Dysaphis tulipae, whose honeydew serves as an attraction for the bumblebee. In general, bumblebees tend to favor perennial flowers rather than annual species because perennial plants produce more nectar, providing the insect with more sustenance. Bumblebees, like bees, collect nectar and pollen to feed offspring.
Vegetable bumble bees are social insects that form colonies of some tens of specimens; these are divided into three “castes”: a queen (the reproductive female), the workers (non-reproductive females) and the males. A single queen begins a new colony in the spring. This performs all the necessary tasks on its own, for over a month, until the first group of workers and males develops from the larvae. Between the end of summer and the beginning of autumn there are new females and breeding males. The males do not return to the nest after they have developed, becoming autonomous.
The size of the Bombus hortorum colony is small compared to other hornet colonies. A large colony consists of several hundred individuals. The typical bumblebee season lasts from mid-March to October, with the highest population density in the summer period.
With the upper hand of winter, the bumble bees seek out underground places where they can spend the winter in hibernation while the rest of the colony dies. The Bombus hortorum, compared to other common bumble bees in Europe, is the one that wakes up later from winter hibernation.

Ecological Role –
The garden bumblebee has a remarkable visual memory, which helps him in the paths he uses in his habitat in search of food sources. Because of its long tongue, this hornet visits mainly flowers with deep corollas, but also dead leaves, ivy, veccie, clover, digitalis, thistles and other species.
Bumblebees are among the most important and useful pollinators for humans. The modernization of agriculture based on the use of pesticides is having a negative effect on the genus Bombus in general. Pesticides have an impact on the colonies of B. hortorum by reducing the development of the brood and negatively affecting their memory, which prevents the insect from remembering the locations of foraging sites and nests. When a single queen establishes her colony at the start of the season, the risks associated with pesticides could have consequences for the development and size of the colony, resulting in colony decline. However, to date, this species is not yet in danger of extinction.
Unfortunately, due to their sedentary lifestyle and the destruction and loss of grassland habitats, the populations of Bombus hortorum should decrease in the near future.
In a study that analyzes the habits of Bombus in different habitats, it was discovered that the bumblebee of the gardens is more abundant in the grasslands recently grazed by cattle, compared to the plowed land. Cattle play an important role in the habitat of Bombus species because their droppings affect the creation of a more diversified floral environment, which is preferred by bumblebees for their foraging habits.
For this reason, in order to deal with the conservation of Bombus hortorum, it is important that large areas be protected from pesticide treatments and the use of biocides, in order to guarantee nesting and foraging sites. This would allow the restoration of a natural habitat, where also allow the grazing of livestock during the summer, with a consequent increase in plant diversity and a greater wealth of flowering species preferred by this insect, as well as by other bumblebees. Among the other limiting factors of the Bombus hortorum colonies remember that often the nests of this insect are parasitized by the Bombus barbutellus that lays its own eggs.
Other parasites can be represented by the larvae of Physocephala rufipes and Sicus ferrugineus.