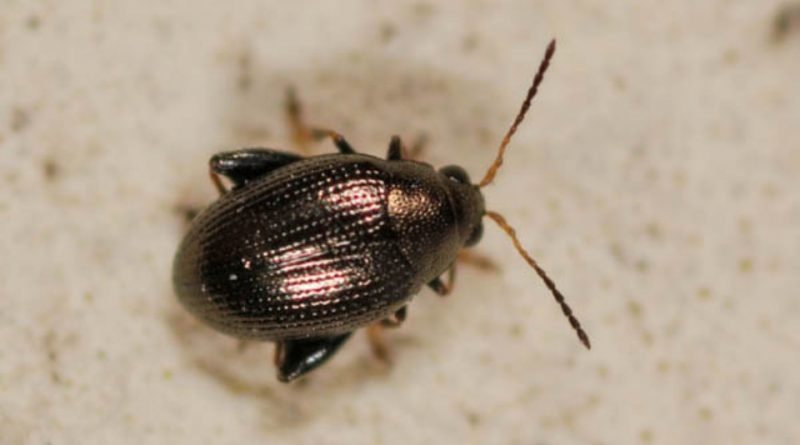 The Chard Altica (Chaetocnema tibialis Illiger, 1807) is a small beetle belonging to the Chrysomelidae family.

Geographical Distribution and Habitat –
The Altica della Bietola is a beetle that is found in a vast range including the Mediterranean countries, southern Europe, the Caucasus, central Asia, southern Siberia and, to the east, towards Korea, where it develops on host plants such as: sugar beet, (Beta vulgaris L.), other Chenopodiaceae and various Amaranthaceae, such as Amaranthus spp ..

Morphology –
The Altica della Bietola is a small beetle that can be recognized for its size of about 12 mm in length, bluish-green in color, with metallic reflections, particularly on the elytra. The larvae of this insect live in the soil, in the rhizosphere, where they do not cause damage.

Attitude and biological cycle –
The adults of Chaetocnema tibialis, cause round erosions, on the leaf edge, with their robust chewing apparatus; these erosions involve the mesophyll and the lower epidermis, leaving the upper epidermis intact and then detaching, creating an impallination of the leaf that is pierced in several places. If the attack is early and affects the young seedlings, serious failures can occur due to the death of the seedlings themselves.
The Altica della Bietola sverta at the adult stage in the ground or on wild plants at the edge of cultivated land, sheltered at their base. Subsequently, in the spring period, between the end of March and April, the adults go to the Bietola fields and begin their trophic activity, determining the damage described. After about 15-20 days, the adults mate and lay in the ground, near the host plants. The newborn larvae descend into the ground without causing damage and, from here, these larvae give rise to new adults who can either winter directly or, in certain favorable climatic conditions, originate a second, summer, unimportant generation. The insect, also depending on the climatic conditions, can therefore take from 1 to 2 generations.

Ecological Role –
As for other phytophagous beetles the damage is determined by the adult stages, manifesting itself on the aerial apparatus, especially on the young plants with cotyledon leaves or with the first true leaflets.
The agronomic and ecological measures to reduce the populations of these insects are obviously preventive in nature and must be decided before the plant species attacked by reorganizing the entire production system. In many texts we read that the remedy is to eliminate spontaneous plants at the margins of beet cultivations. This way of working is wrong because the specialization of cultivation is even greater, with a decrease in biodiversity and biocenosis of beneficial insects. Moreover, the use of chemical fertilizers, such as nitrates in particular, increases the palatability of the plants (which develop softer organs) by establishing a negative circle from which the intervention with geodisinfectants and insecticides then alters even more the delicate agroecological balance.
The agronomic measures must instead go in the direction of a model of agricultural production where the increase in the contemporary biodiversity of the crops, of the consociations, of the decrease in the contribution of synthetic fertilizers rebalance an exasperated system and in which the insect, in question is the effect and not the cause.
In some countries, as in Turkey, we are also moving in this direction; in fact, new microsporidia have been found in different regions of this country that can help control the harmful organism.
Before the intervention with the possible insecticide, it is necessary, in any case, to activate visual samples of the damage to establish an intervention threshold, which is thus fixed:
– presence of holes on the cotyledons;
– presence of 2-4 holes respectively on plants with 2-4 true leaves.