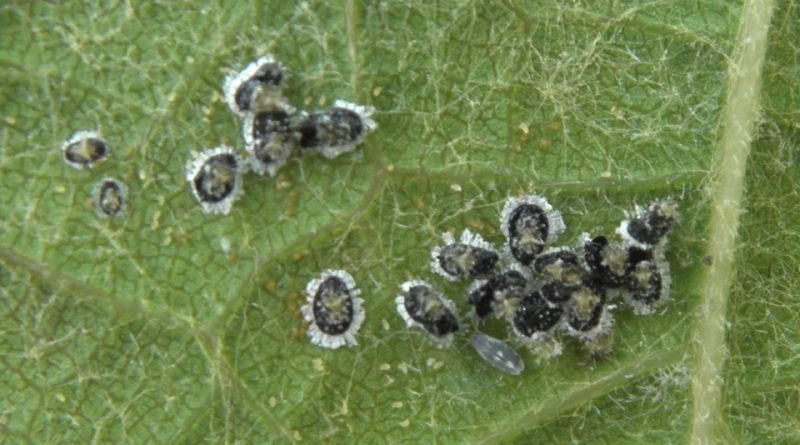 The spiny white fly (Aleurocanthus spiniferus (Quaintance, 1903)) is an insect, recoil moth, of the family Aleyrodidae.

Geographical Distribution and Habitat –
Aleurocanthus spiniferus is a tropical insect, native to south-eastern Asia and widespread in Africa, Asia and Australia and in the Pacific. In Italy the first reports date back to 2008 in Puglia, in the province of Lecce. Recently the reports on its presence in other environments have multiplied, to get to be found, as well as in southern Italy, sporadically also in Emilia Romagna. At European level, as well as in Italy, it is present in Greece, Bulgaria, Montenegro and Croatia.

Morphology –
Aleurocanthus spiniferus is an aleirodide whose adults of this species are not skilful flyers.
It is a species that has six stages of development and the entire biological cycle takes place on the leaves. From the egg the insect flickers and passes through three nymphal stages and one of pupa (neometabola) before becoming an adult. The first nymphal stage is not very mobile, while the following ones are immobile. The female nymphs measure about 1.2 mm long and 0.8 mm wide; the male specimens are slightly smaller. The adults have blue-gray metallic wings, eyes and many parts of the body of bright red color, antennas and yellowish-white legs.
It has a pungent-sucking mouthparts and therefore feeds at the expense of the elaborate sap of the vegetables.
They are also recognized for the aggregations originated by one or a few females that infest the underside of the leaves and overwinter on these plant organs as neanids. This insect is capable of withstanding temperatures even above 40 ° C but does not survive below 0 ° C.

Attitude and biological cycle –
Aleurocanthus spiniferus is a polyphagous insect, at least in the areas of origin, but in our environment it shows a marked preference for plants of the genus Citrus. The juvenile forms of this moth usually infest the underside of the leaves of the plants, where by means of buccal stilettos they puncture the plant tissues by subtracting sap and producing sugary excrements that smear the attacked plants determining the development of fumaggini. The number of annual generations varies according to the climate; normally they have 3 generations and overwinter mostly at the neanide stage.
The characteristics of this insect, including the high fertility derived also from parthenogenetic reproduction (ie without the need for fertilization), allow the emergence of phenomena of resistance to insecticides, making the control particularly complex.
Moreover, due to its morphological characteristics it can easily be confused with the Parlatoria ziziphi, a Diaspididae cochineal which does not produce honeydew and therefore does not induce fumaggina.

Ecological Role –
In its distribution areas, which are widespread worldwide, but limited to tropical, subtropical and mild climate areas, the Aleurocanthus spiniferus can be observed not only on citrus plants, but also on rose plants, grapes, peach, pear and guava. In our environments it has shown instead a marked preference for plants of the genus Citrus (orange, mandarin, lemon) both cultivated as fruit plants and as ornamental plants.
For its dangerousness A. spiniferus is included in the A2 list of the EPPO and is also a quarantine pest for the territory of the European Community (Annex II, part A, Section I Directive 2000/29 EC of the Council of 8 May 2000 ).
Even if the adults of this species are not skilful flyers, the diffusion can be operated by the wind on more or less short distances; in the long distance the displacement is due to the accidental spread of infested plant material.
In nature the containment of this aleirodide is carried out by numerous natural enemies; among these we remember essentially the parasitoids belonging to the Afelinidae and Platigastritidae families, including Amitus hesperidum and Encarsia smithi.
The feeding activity of the white thorny fly causes direct and indirect damages that lead to the desiccation of the vegetation with consequent fall of the photosynthetic organs and in the most serious cases to the death of the affected plant.
The Aleurocanthus spiniferus emits abundant sugary droppings, the honeydew which, besides representing an aesthetic damage on plants also ornamental, favors the appearance of the fumaggine, expression of the proliferation of saprophytic fungi often belonging to the Generaria Alternaria, Cladosporium and Capnodium. its containment must immediately be said that, as for other newly introduced insects, it is necessary to wait for a suitable period in which the ecosystem restores the biocenoses necessary for the natural control of its population. Its infestations are among other things favored by the excessive specialization of citrus orchards (in the case of these crops), the inappropriate use of nitric fertilizers, the lack of grassing, hedges, biodiversity and the lack of agroecological and agronomic techniques, including prunings that allow internal ventilation of the trees.
The treatment with insecticides, in addition to being difficult because the insect is able to develop a certain resistance to the active ingredients very quickly, becomes in the short term a dangerous weapon as it decreases above all the populations of useful insects (predators and parasite idi) and of the pollinators, as well as to act on the fauna of birds and other animals that play an important role of overall biocenosis.
At the moment it is advisable to review the agroecological and agronomic conditions in which you operate your citrus grove, with the help of technicians specialized in agro-geology, and to use, at the limit oils that slow down its spread; more if available. It would be important to resort to the use of parasitoids, among which Amitus hesperidum and Encarsia smithi are effective, which is currently prevented by the Habitat Directive.
Recently, attention has turned to the use of the Delphastus catalinae ladybird, a predator of American origin (but already acclimatized in Europe and present in Italy) that seems to be much more effective than parasitoids.
Regarding the use of mineral oil or white oil it is specified that it is a contact insecticide, which works by causing asphyxia. It is therefore effective on adults but unfortunately has no significant effects either on eggs or on intermediate growth forms, the neanids, which are coated with a waxy substance that prevents the action of mineral oil.
To date, due to pure confirmation, the active ingredients that have been used are: imidacloprid, acetamiprid or thiamethoxam and, alternatively, pyrethetrine type pyrethroids. Less effective deltamethrin or pyrethrum itself, because on fairly common infestations they have little effect. To avoid the onset of phenomena of resistance in the insect it is also advised, in case of serious infestations, to alternate the active ingredients used between one treatment and another. But, we repeat, the use of chemical fighting is a measure with a worse aspect than the solution.