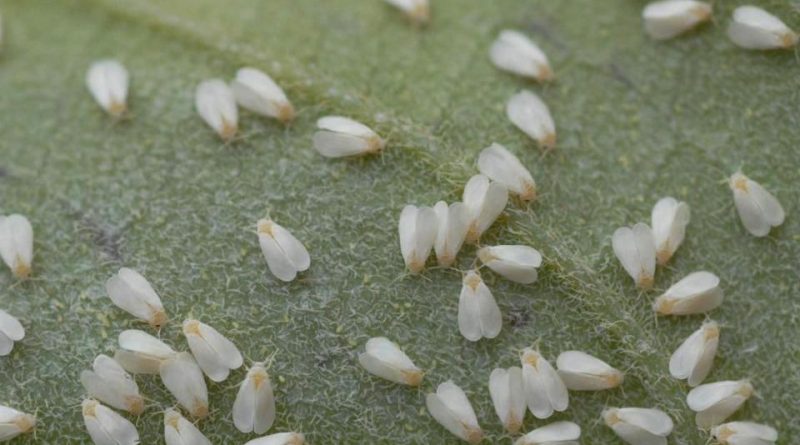 The Citrus Aleurodide (Dialeurodes citri Ashm.) Is a small insect belonging to the Aleyrodidae family.

Geographical Distribution and Habitat –
Dialeurodes citri is a species native to East Asia. His arrival in Italy is dated between 1950 and 1960. He was reported in France in 1954 on the French Riviera. Today it is a species widespread throughout the Mediterranean area.

Morphology –
The Citrus Aleurodide is recognized as the adult measures about 1.5 mm in length, with a yellowish colored body, covered with a waxy and white bloom. The neanids are about 1.5 mm long, greenish-yellowish and with a flattened body.
The eggs are pedunculated, oval, of dimensions from 0.2 to 0.3 mm of height and with yellowish color.

Attitude and biological cycle –
The Citrus Aleurodide is a polyphagous species that, however, prefers citrus fruits, on which it can carry out the entire annual cycle.
Dialeurodes citri sverna as a mature nymph and more rarely as an egg. In spring, around March-April, there is the flicker of the adults; shortly after the females lay on the underside of the leaves. In the southern regions, generally, 2-3 generations per year are performed, with peaks of flicker in May, in July-August and in September-October.

Ecological Role –
Dialeurodes citri is a polyphagous species that lives on citrus fruits and other species. Normally the species populated by this insect, in addition to citrus fruits, are: Ligustro (Ligustrum), Frassino (Fraxinus), Lillà (Syringa), Forsythia, Lilac of the Indies (Melia), Fico, Caco (Diospyros), Pomegranate (Punica) and Susino. The insect settles on the underside of the leaves and feeds by subtracting sap; in the case of heavy infestations the leaves turn yellow and fall early, with consequent deterioration of the entire plant.
However, the greatest damage is caused by the nymphs that, when they are present in large numbers on the lower side, produce abundant honeydew and smear the vegetation. The presence of honeydew on the leaves causes a reduction in gas exchange, reduced photosynthesis and the establishment of sooty molds that make the fruits unstable and blacken the vegetation.
Generally the attack does not cause serious damage to the plant but repercussions on the quality of the fruits.
The containment of the populations of Dialeurodes citri is carried out with appropriate agroecological and agronomic techniques.
Meanwhile it is necessary to carry out appropriate prunings that favor the aeration of the foliage and avoid excessive nitrogenous fertilizations which greatly attract the aleurodides and all the insects that feed on sap.
Another trick, little followed in intensive agriculture, is not to over-specialize crops but to increase the biodiversity of the farm with the presence of hedges that host parasitoids and predators, grassing and other plant species.
The destruction or decrease of biodiversity and entomofauna are the main factors, together with the wrong agronomic and agro-ecological techniques, to cause the increase of the population of this insect. In nature the populations of the phytophagous are controlled by entomophagous species such as:
– the Coccinellide: Clithosthetus arcuatus;
– the Hymenoptera Afelinide: Encarsia lahorensis; this, originally from Pakistan, was introduced in Italy in the 1970s.
Currently it is well acclimatized in the southern environments where it carries out an effective work of control.
The chemical struggle must be the last resort as, in any way, it will unbalance the present systemic echo balance.
The chemical fight, in any case, must be carried out when the intervention thresholds are evaluated, sampling some leaves on plants chosen at random in the citrus grove (about 10%). The thresholds were estimated in: – 5-10 neanids per leaf, for Mandarin and Clementines – 20-30 neanids per leaf, for Lemon and Orange.
The products to be used can also be exclusively white oils. Only in extreme cases can they be added to these phosphorganics or pyrethroids.
Against the Aleurodide are also effective interventions with white oils made, in winter, to combat Cochineals; in fact these treatments affect the wintering nymphs.