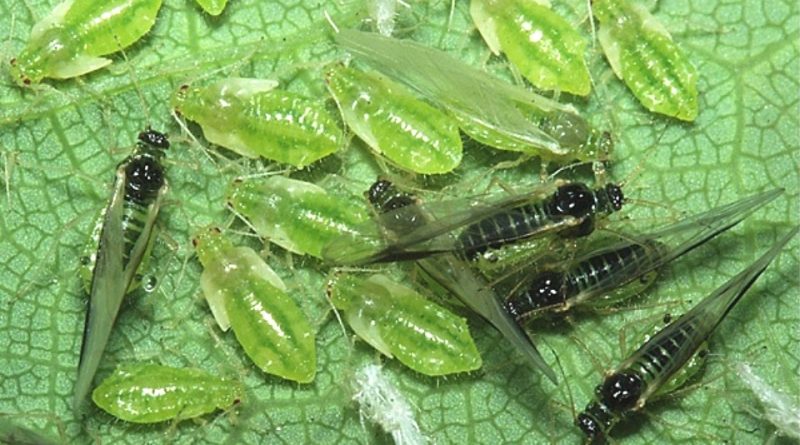 The maple aphid (Periphyllus acericola (Walker)) is a recollection of the Aphididae family.

Geographical Distribution and Habitat –
The maple aphid is one of about 40 species of Periphyllus that lives mainly in the lower part of the leaves, petioles and young shoots especially of the Acer pseudoplatanus. The main area of ​​diffusion of Periphyllus acericola is Europe.

Morphology –
The Periphyllus are small yellowish or greenish Aphids, with an adult body length of 3.0-3.5 mm. The winged forms of this aphid can be recognized by the large abdominal transverse abdominal dark bars just separated between the segments.
The founders of Periphyllus acericola are brown-greenish, strongly hairy with numerous black tubercles. They are unusually large, with a body length of up to 4.5 mm.

Attitude and biological cycle –
The maple aphid overwinters at the egg stage, on the sprigs of host plants like Maple and Frassino. .
These Aphids live in colonies under the leaves and on the buds of the Maples; the nymphs of Periphyllus acericola feed on the shoots of one year of these plants, reaching maturity in large populations by mid-April. The bites of this aphid cause a development arrest and a slight deformation of young shoots and leaves.
Furthermore, these colonies produce an abundant honeydew that smears the vegetation and the under-aroma with the direct and indirect consequences that this entails. In fact the honeydew causes asphyxia to the leaves and favors the establishment of the fumaggini that further aggravate the damage; finally, in parks, gardens and avenues, the abundant honeydew causes problems in the use of the urban furnishings of these places (benches, parking lots, etc.).
As with other Aphids, even for Periphyllus acericola, a symbiotic relationship is established with the ants that protect them from predators and parasites.

Ecological Role –
The maple aphid is an insect that lives mainly on the Acer pseudoplatanus, on other Acere and Frassini. Its presence and virulence can increase considerably in ornamental plants of these species where biodiversity decreases and the Aphid gains nutritional and competitive advantage.
Like other aphids, this species is also controlled by predators and natural parasitoids such as hoverflies and coccinellids under conditions, as mentioned before that the ratios of biodiversity between different plant species are not drastically changed. Those that survive predators and parasitoids mature in alien and winged forms. In the case in which the population of these aphids goes out of balance of the various control biocenoses, it is also possible to resort to the chemical fight (which must be the last beach); it can only be performed in cases of heavy infestation and after having evaluated the species of the Maple, its size, its location and the possible presence of natural enemies.
In any case, if the conditions of infestation and techniques that justify the interventions exist, specific products must be used, or general insecticides. The operation must be performed as early as possible, when useful insects are not yet massively present on the plants.