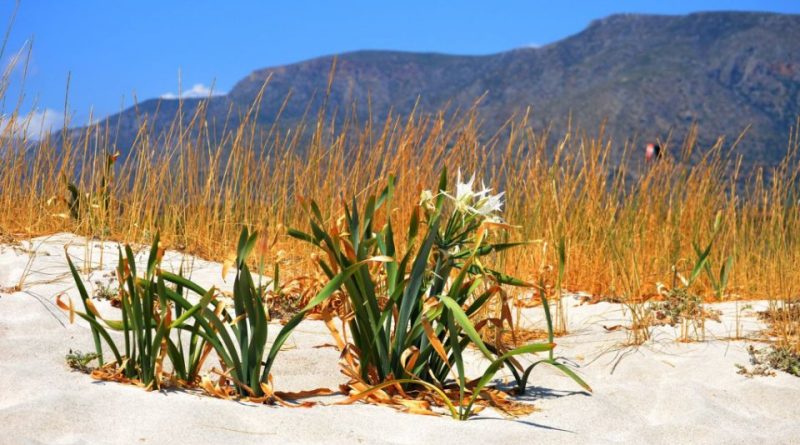 Halophyte or halophile plants are plants that live in environments rich in salts. The term halophyte comes from the Greek ἅλς “salt” and φυτόν “plant.
For halophyte we commonly mean a particular terrestrial vegetation represented by a few families of cormophytes and composed of hiring plants determined morphological and anatomical characters, which culminate in a pronounced xeromorphic physiognomy, depending on the richness of the substrate in soluble salts.
Halophytes are plant species endowed with particular morphological or physiological adaptations that allow it to settle on saline or alkaline soils or brackish waters.
Generally, concentrations in sodium chloride soils above 1% are toxic to most plants. On the other hand, halophyte plants require a concentration of 1-2% to grow optimally. The chemical nature of these salts seems to be to some extent indifferent (carbonate, chloride, sodium sulphate, magnesium sulphate), so that the halophytic vegetation takes, at any point of the globe, on the coasts or inside the continents, and any height above sea level, a uniform appearance.

However, the characteristic of these plants consists in the high resistance to drought, in the ability to absorb water to very low potentials, to accumulate salts in the tissues or to eliminate them with a specific glandular apparatus, to reduce the intensity of transpiration, to resist conspicuous absorptions, especially sodium.
To adapt to these often extreme conditions, halophyte plants implement mechanisms that can be summarized as follows:
– the development of resistance to the entry of sodium chloride into the cell (present in various species of Artemisia);
– the accumulation of sodium chloride within the cellular vacuoles (typical of many species of Chenopodiaceae, examples are the salsola and salicornia);
– the elimination of sodium chloride by secreting cells present in the stem and in the leaves (used by various species of Limonium and an example are the mangrove forests).
The families of the xhenopodiacee, Aizoacee, Plumbaginaceae, Portulacaceae, Tamaricaceae, Frankeniacee, Rizoforacee, Zigofillacee have a particularly alophilous character; without excluding several others, less generally adapted to the high salinity of the substrate, even if they possess some particularly favored species under this relationship.
The habitat of halophyte plants is that of soils which, due to capillary rising phenomena or periodic or permanent floods, accumulate sodium chloride and other neutral salts or basic sodium salts (carbonate and sodium bicarbonate). These conditions are found above all in the deserts, especially in salty deserts, in coastal wetlands (ponds, salt marshes and lagoons). They can also be included in the composition of psammophilous vegetation, even if they are not exclusive essences of these associations.