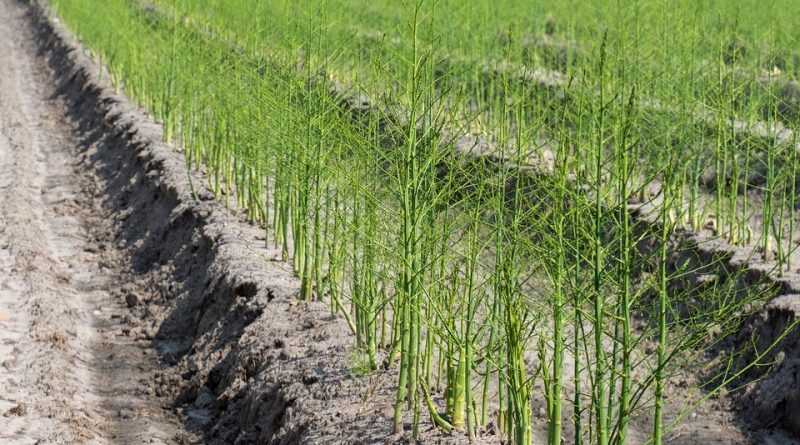 Asparagus or asparagus (Asparagus officinalis L.) is a perennial herbaceous species belonging to the Liliaceae family.

Systematics –
From the systematic point of view it belongs to the Eukaryota Domain, Kingdom Plantae, Magnoliophyta Division, Liliopsida Class, Liliidae Subclass, Order Liliales, Liliaceae Family and qindi to the Asparagus Genus and to the A. officinalis Species

Etymology –
The generic term Asparagus comes from the Greek ἀσπάραγος aspáragos (in Teofrasto); according to others it is composed of α- alpha strengthening and σπαργάω spargáo, I am luxuriant, turgid, assonant with the Sanskrit sprout bud; according to others, it comes from σπαράσσω sparásso, I lacero, which derives from the root spina sper present in many Greek, Latin, etc., with reference to the spines of which many species of this genus are provided. The specific epithet officinalis derives from offícina, medieval laboratory: that is usable in pharmaceuticals, herbal medicine, liquor, perfumery and the like.

Geographic Distribution and Habitat –
Asparagus officinalis is a native species of Mesopotamia. With the discovery of the New World also the asparagus crossed the ocean and found new land suitable for its cultivation. Today, the world’s largest producers are China, Peru, Mexico, the United States and South Africa; in Europe, Spain, France, Germany and Italy, which has the highest unit yields. 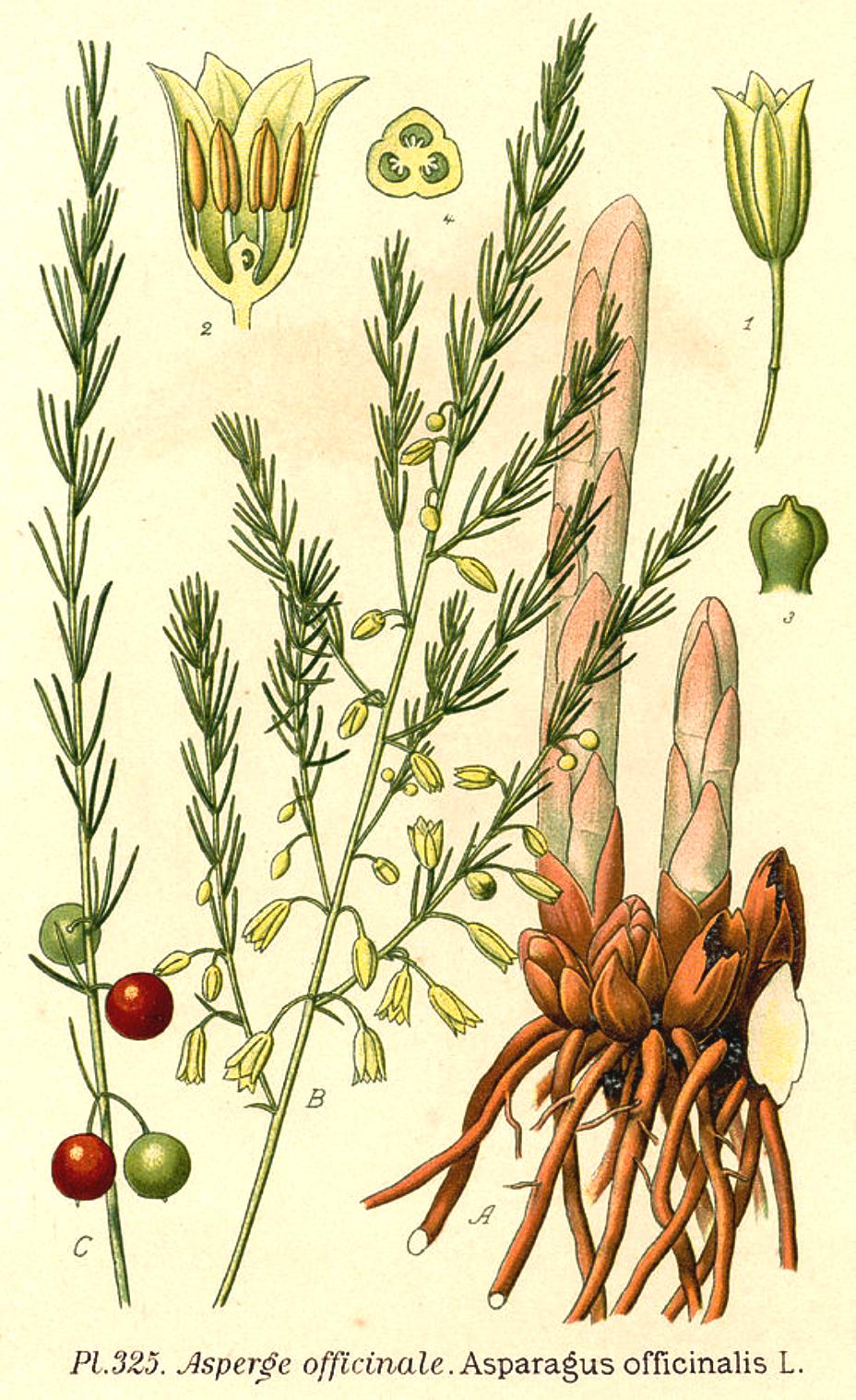 Description –
Asparagus officinalis is a dioecious species; with male and female flowers present on different plants and pollination takes place by insects; the fruits are small red berries containing black seeds. The root system consists of two types of roots:
– Main: arranged in a radial pattern on the “crown”, fleshy, cylindrical, with ramifications and indefinite accretion; they can reach considerable depths and act as a reserve organ; if a main root is cut it does not branch any more and, due to the difficulty of healing, tends to rot;
– Secondary: fibrous and thinner, they are present along the main roots and especially in the terminal part and have an absorption function.
The plant is endowed with rhizomes, which are modified stems that grow under the ground forming a lattice and from which the shoots depart, that is the epigean and edible part of the plant. The leaves (called cladòdi) are minute and gathered in bundles of 3-6.

Cultivation –
The interest for this plant as a vegetable dates back to antiquity, even if it seems that only at the end of the Middle Ages began its cultivation on a large scale. The plant is grown for its shoots and, in the case of forced cultivation, these are white in color while in the open field due to the chlorophyll photosynthesis they take on a green color. If not collected for consumption from the shoots stems varying in length ranging from 1 to 1.5 m; these stems must be collected when they have not yet reached a hard wood consistency. For the cultivation technique you can consult the present sheet.

Uses and Traditions –
The asparagus boasts a thousand-year history. It was cultivated and used in the Mediterranean by the Egyptians and in Asia Minor 2000 years ago, as well as in Spain. The Romans, as early as 200 BC, had manuals in which they minutely displayed their cultivation. The asparagus was mentioned by Theophrastus, Cato, Pliny and Apicius. The Roman emperors liked asparagus so much that, for example, they seem to have built special ships to collect them, ships that had the name of asparagus (“asparagus”). Subsequently, in the fifteenth century began cultivation in France, and then, in the sixteenth century, also come to England; only later was it introduced to North America. Native Americans dried asparagus for subsequent medicinal uses.
The chemical composition of the asparagus is as follows: Asparagine, one of the amino acids present in abundance, which is used for protein synthesis; Rutin, which serves to reinforce the capillary walls; Folic acid, present in abundance; Manganese and vitamin A, which have a beneficial effect on ligaments, kidneys and skin; Phosphorus and vitamin B, which allow to combat asthenia; Calcium, Magnesium, Potassium, Sodium (in minimum quantities), Carbohydrates, Proteins, Fats: (contains no cholesterol), Water: 90%. The edible part is 52% and has a caloric value of 25 Kcal / 100g.
Some of the components of the asparagus are metabolized and expelled through the urine, giving it a typical and strong odor some considered unpleasant. In particular it is caused by some degradation products containing sulfur (in particular thiols and thioesters).
From the point of view of its food use, the Mediterranean tradition prefers green asparagus; in northern Europe and in Veneto the preference for white shoots prevails. The shoot has diuretic and laxative properties.
The taste of the asparagus evokes the taste of the artichoke but its taste is strongly determined by the method of cultivation. In fact the white asparagus, sprouting entirely under the ground (with a very low content in chlorophyll) has a delicate flavor. The violet asparagus, with a very fruity taste and with a slight bitter taste, is actually a white asparagus that manages to escape from its site and, seeing the light, then in turn implementing photosynthesis, acquires a fairly uniform lilac color. The green asparagus, which normally germinates in the light of the sun like the violet one, has however a marked flavor and its bud has a sweet taste. It is the only asparagus that does not need to be peeled.

Preparation Mode –
Asparagus officinalis is widely used in various national and typical cuisine; both green and white buds are used: the stems should be hard, flexible, break resistant, of the same thickness and with the tips still closed, the base must be kept moist to keep the product fresh.
To prepare it, cut the wooden ends of the asparagus and, depending on the type, remove any white skin up to 4 cm under the bud or in the case of old or particularly large asparagus. Some before cooking they immerse them in icy water and sometimes the skin is added to the cooking water and removed only at the end because this, according to some, would preserve the taste.
Asparagus can be prepared with various typical preparations. In Italy, green asparagus is often served by sautéing it in a pan after boiling, simply with butter or butter and parmesan (“asparagus alla parmigiana”). Another very consumed recipe is that where the asparagus are accompanied by eggs, butter and grated or hard-boiled cheese; a variant widely used in the south of Italy is the fried asparagus, obtained by mixing the already boiled green asparagus with eggs. In France and Germany it is typical to serve white asparagus with hollandaise sauce. In other recipes they are served with vinaigrette, butter-white sauce, with Maltese sauce, Bolzanina sauce, melted butter, or a drizzle of olive oil and Parmigiano Reggiano. Asparagus can be used to prepare risottos, soups, mousses or in velvety. In Chinese restaurants it is possible to taste fried asparagus paired with chicken, shrimp or beef. In addition, the asparagus can be preserved, blanched, in oil or frozen.