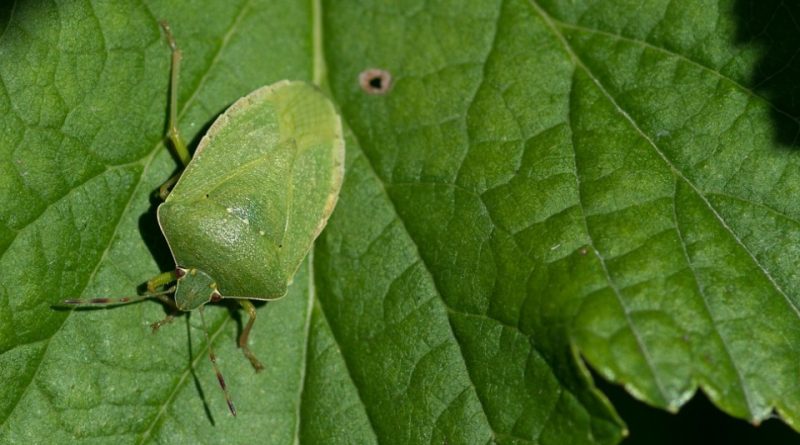 The green bug (Nezara viridula Linnaeus, 1758) is a phytophagous insect of the Pentatomidae family.

Geographic Distribution and Habitat –
The Nezara viridula is probably native to Ethiopia, but now spread all over the world. It is a very polifagous bug and spread almost throughout the national territory.

Morphology –
The nymphs of the Nezara viridula are almost black, dotted with white; the nymphs, according to age, may have blackish or greenish pronotum; the rest of the body is green except for a dorsal area in the middle of the abdomen which is spotted with black and white. The livery of this insect is completed by typical white spots placed in longitudinal rows at the edges of the body; often a reddish marginal punctuation may occur. This insect, like many Heteroptera, has odoriferous glands that emit a quite annoying smell. These glands have repellent action, so that predators do not bother them. Precisely for this reason the green bug does not have many natural enemies, and the few who have prey its eggs instead of the adult specimen. It can be confused with the Palomena prasina but it is distinguished by the whitish callosity at the base of the scutellum that are absent in P. prasina.

Attitude and biological cycle –
Nezara viridula has a high polyphagia, on plant species belonging to over 30 families, both monocotyledonous and dicotyledonous. Among the main factors limiting its spread in temperate zones is the cold of winter (with greater resistance to cold than females). In recent decades, the species has extended its range (perhaps due to climate change) further north, and is well represented in the Italian Northwest in lowland areas where the average January temperature does not exceed 1.5 ° C. the Nezara viridula spends the winter among the dry leaves, among the hedges, waiting for the spring weather to allow them to start the activities. Their reproduction begins with the laying of the eggs, causing damage to the bites on the host plants. The eggs hatch (depending on the temperature) between 5 and 21 days. For the control of this insect some agroecological criteria can be adopted as described in the following table.

Ecological role –
The adults of Nezara viridula, together with the juvenile forms of the second generation, are the most responsible for the infestations, especially on the tomato (this is also called tomato bug). The damage is mainly caused by intensive cultivation, as the monoculture of the tomato generates excellent conditions for the proliferation of the bug. The damage is both on the leaves and on the fruit; this is caused by the nutrition bites of all the mobile forms of the plant. On the leaves, due to the trophic bites, there are localized necrosis and drying of different degrees. On the tomato fruits during ripening, typical chlorotic punctuations are generated which, later on, become very nuanced localized necroses. The bites, due to the secretion of the repugnatory glands, give an unpleasant taste to the fruits that can not be marketed. Moreover, the green bug is responsible, with its bites, of some secondary diseases (in particular of the bacteria). Other plants on which there are damages on the fruits are: the Hazelnuts, in which they cause, together with other Pentatomids, the so-called “cimicato”, that is an alteration of the shape and taste of the edible part of the fruit that becomes shriveled and unpleasant; Legumes where necrotic changes occur at the pod, with qualitative and quantitative alteration of the seeds.