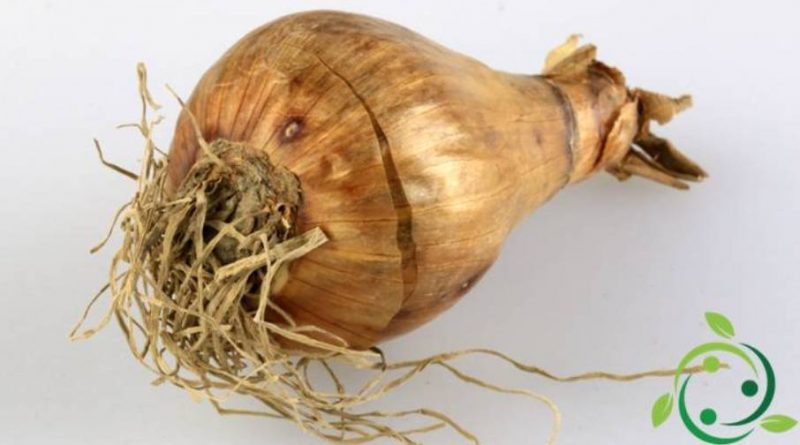 The bulb is an enlarged part at the base of the stem surrounded by thick scales (catafilli) or basal leaves. It is an agamic propagation organ that also performs a particular function of resistance to unfavorable climatic conditions, such as cold, drought, etc. The bulb, according to its appearance, is defined as: tunicate (or suit) when it is covered by an envelope , as in garlic, hyacinth, etc .; embryonic, when the catactyls are not very large, assuming the appearance of scales, as in the lilium; solid, when the bulb has a very large axis but the catfills are very small. In this case it also takes the term bulb-tuber, as in saffron and gladioli. The presence of this organ characterizes, together with the tuberose and rhizomatous, the species belonging to the geophytes and is characteristic of the monocotyledons (Liliaceae, Alliaceae, Amaryllidaceae, Iridaceae).

The bulb is provided with a part of many collated roots and on the other of a gem. The gem is surrounded and protected by leaves, some of which are internal, which are the catafilli, of a juicy consistency and rich in reserve substances, others more external, dry, that play a protective function. From the bud, when the external conditions are suitable, leaves and one or more flower axes are generated. The function of catafilli is to ensure and nourish the sprout during the early stages of germination. Other structures similar to the bulbs, are those of the bulbs that, in bulbous plants, detach from the mother plant from the mother plant, with the function of propagation of the species. In some species the bulbils form on their inflorescences, the flower heads; in others still the bulbils can be formed in the axils of the leaves or elsewhere.