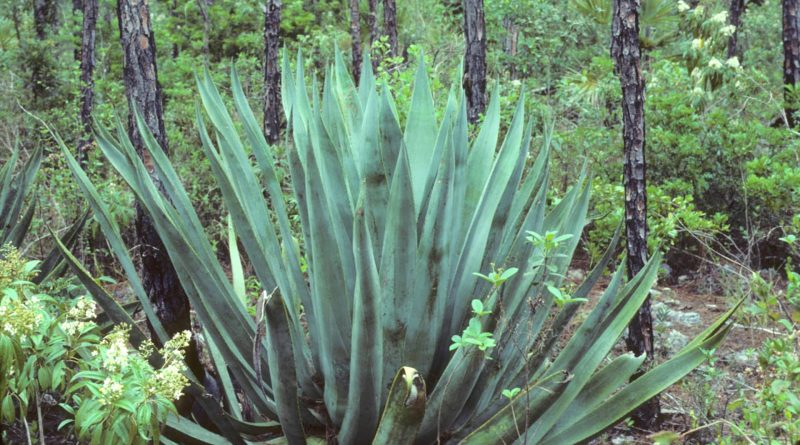 Systematics –
This plant, from the systematic point of view, belongs to the Domain Eukaryota, Kingdom Plantae, Class Liliopsida, Order Liliales, Family Agavaceae and then to the Genus Agave and to the Species A. sisalana.

Etymology –
The epithet Agave derives from the Greek ἀγαυός agauόs admirable, glorious, illustrious, noble: for the spectacular appearance of the agave sisalana in bloom. In Greek mythology, Agave (in Greek Ἀγαυή Agayé), daughter of Cadmus king of Thebes and his wife Armonia, was wife of Echione, from whom he had a daughter, Epirus, and a son, Penteus, killed by herself, invaded by fury of the Dionysian ecstasy. The specific term derives from Sisal, Yucatan port where the sisal fiber obtained from this Agave was loaded.

Geographic Distribution and Habitat –
Agave sisalana is native to the Yucatán peninsula in Mexico but for its adaptation is considered an invasive species. THERE. sisalana can be found in deserts, dry forests, prairies, road borders, disturbed and secondary forests, gariche, coastal beaches, coastal dunes and plantations. Description –
Agave sisalana is a perennial tropical succulent plant of 1.5-2 m high, with thick leaves in a basal rosette of elongated sword-shaped leaves from the base. The plant base is a short trunk (30-150 cm), from whose top grow the spiral-shaped leaves that are heavy and persistent, 0,6-1,2 m long, 10,2-20,3 cm broad and 2 thick , 5-10.2 cm at maturity. The inflorescence is a large panicle that only blooms once at about 2 years. The root system is fibrous, superficial up to 60 cm deep; moreover it produces underground rhizomes from buds in the axis of the lower leaves. Along the rhizomes there are shoots that can generate new plants forming colonies. The fruits are capsules up to 6 cm long with a diameter of 2-2.5 cm.

Cultivation –
Agave sisalana needs full sunlight and a moderate supply of water to grow. It grows best in regions with an average annual rainfall of 800-1000 mm (or less). The species is resistant to drought; it is morphologically suitable to manage water scarcity thanks to its extensive root system and to the arrangement and shape of the leaves which, like a funnel, concentrate rainwater on a small area. The maximum temperature must not exceed 32 ° C. With minimum temperatures of 5 ° C. the plant is damaged and, moreover, does not tolerate hail or stagnation. In dry and dry conditions or at low average temperatures it forms less leaves per year and has a longer life cycle. This species prefers sandy-loamy soils, but can be grown on a range of soils with a pH between 4 and 6.

Uses and Traditions –
The textile fiber obtained from its leaves (called sisal) is used for the construction of ropes, twines, baskets, carpets and other handicrafts. The dry weight components of sisal fiber are about 55-65% cellulose, 11-18% hemicellulose, 7-15% lignin, 1% pectin and 1-8% ashes (Elzebroek and Wind, 2008). Waste from sisal leaves was used to feed cattle and rabbits. The succulence of fresh sisal waste makes it a useful food during dry periods. Leaf waste has also been used as a material to produce biofuels (methane). This species is also used as “live fences” or as an ornamental plant in gardens. from Agave Sisalana you also get: cosmetics, cat scratching post, lumbar support straps, carpets, slippers and cloths. In Africa, extracts of A. sisalana leaves and leaf waste are used in traditional medicine as a fungicide. A study evaluating the antimicrobial activity of leaf extracts and discarded leaf waste in the process of obtaining the fibers showed a significant inhibition of Candida albicans when treated with sisal extracts. The world’s largest producers of sisal fiber are Brazil, Kenya, Tanzania and Madagascar. After the fiber extraction, it still remains about 95-96% of the weight of the leaves (leaf waste). The leaf waste is used as fertilizer, animal feed or dried pulp as fuel for the production of methane.

Preparation Mode –
The sap of the flower stem of A. sisalana can be used to make beer and an alcoholic beverage similar to brandy. The central buds are cooked and eaten as vegetables.