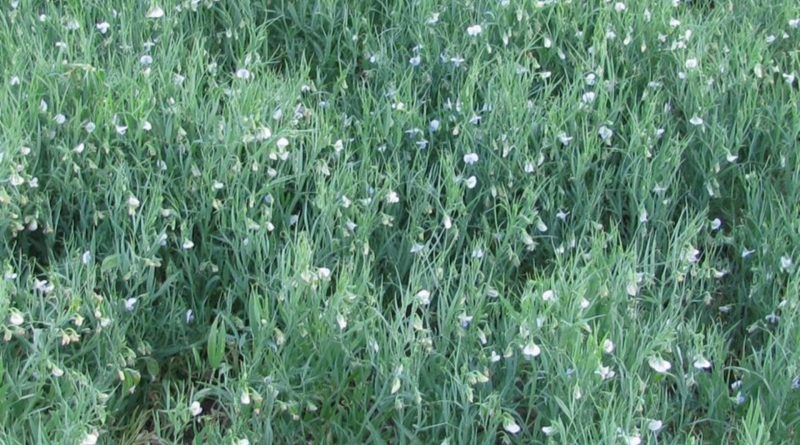 The Cicerchia (Lathyrus sativus L., 1753) is an ancient legume belonging to the Fabaceae family. It is widely cultivated for human consumption in Asia, East Africa and only in Europe and other areas.
Systematic –
From a systematic point of view, the Cicerchia belongs to the Eukaryota Domain, the Kingdom Plantae, the Tracheobionta Subordination, the Spermatophyta Superdivision, the Magnoliophyta Division, the Magnoliopsida Class, the Rosidae Subclass, the Fabales Order, the Fabaceae Family, the Faboideae Subfamily, the Vicieae Tribes and then the Lathyrus Genus Sativus.

Etymology –
The name of the genus derives from the Greek “lathyros”, which in Latinized form is “lathyrus”, “cicerchia”, legume. Instead, the specific epithet comes from the Latin “sativus, -a, -um” that is cultivated, sown.

Geographic Distribution and Habitat –
Cracker is a grain legume originating from the Mediterranean basin (although its real origin is not certain), of ancient culture, but limited due to the poor quality of its seeds, which produce a neurotoxic syndrome (Latinism) with Convulsions and paralysis if consumed in large quantities by humans or animals. It is aloft or cultivated. In Italy it is present in much of the territory, and is often also cultivated and naturalized. Its Habitat is in the uninitiated, cultivated fields, ruins. It grows from 0 to 600 m asl. Lathyrus sativus is a particularly important species in areas of drought and famine; Said crop insurance because it provides good harvest when other crops fail. 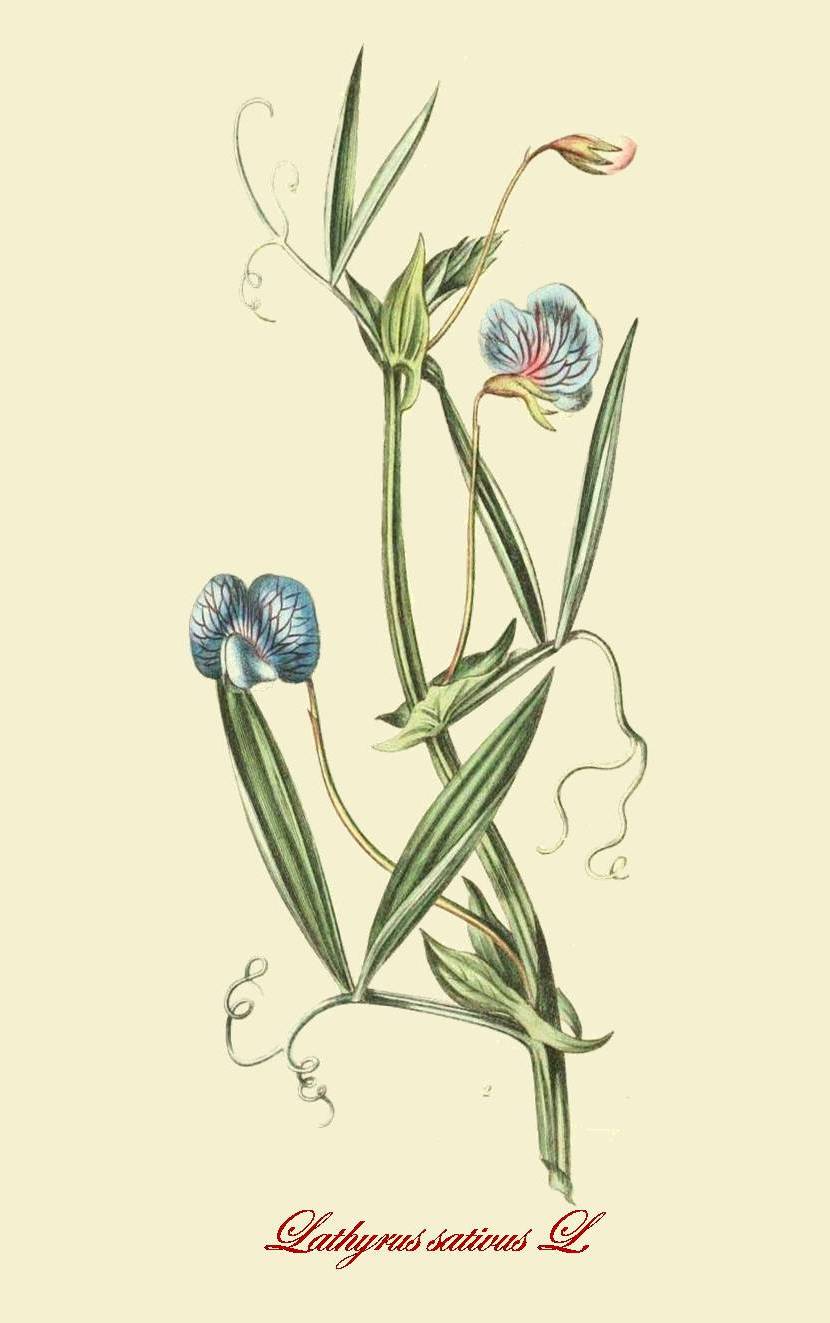 Description –
Cracker is an annual herbaceous plant, glabra, high 20-60 (70) cm, with branched, suffixed, ascending, rambling stems with narrow wings of 0.6-1.7 mm. Its leaves are all divided into two opposite, lanceolate-linear segments of (30) 40-100 x 2-10 mm on a winged sparrow (fillodio); The lower ones with a leaf mucron, the upper ones with a branched veil; Lanceolate, acute, semi-agitated, often with a tooth at the base. Inflorescence in racemose with 1 (2) flowers on an axillary peduncle of 7-75 mm, shorter than the axillary leaf and generally articulated in a short mucron to the middle.
The chalice (8-11 mm) is of the bellied type with a straight or slightly oblique mouth, with subunit lacinias, acute, 1.5-2 times the tube (2-3 mm), the lower 2 often thicker than the upper ones; The corolla (15-25 mm) is papillion-shaped, white, pinkish or pale-blue, with a cross-linked, smudged bail, and oblique, flattened hull. Stamens are diadele with ovary glabrous and twisted stylus.
The fruit of the cicerchia is a glabrous, debridement, elliptical or subglobous legume of 23-47 x 11-22 mm, with 2 wings on the sides of the dorsal sutures, containing 1-3 (5) semi-smooth squares or trapezoidal sections, white Or browns of 9-11 x 6-9 mm.

Uses and Traditions –
The cicerchia is also known as grass pea, Indian beetle, Indian pea, white apple, almort, guija, pito, tito or alverjón (Spain), chícharos (Portugal), guaya (Ethiopia) and khesari (India ). Consumption of this legume plant in Italy is limited to some areas of central-south and unfortunately is constantly declining, though if recently research into other sources of protein (not of animal origin) is putting it to the attention of some companies and researchers.
Like other Leguminaceae, Lathyrus sativus produces high-protein seeds. However, its seeds also contain, in variable amounts, a neurotoxin in the form of β-N-oxalyl-L-α, β-diaminopropionic acid of ODAP. ODAP is considered to be the cause of the disease called neurolation, a neurodegenerative disease that causes, in addition to immediate nerve effects, paralysis of the lower limbs. The disease was found to be famine in Europe (France, Spain, Germany), North Africa, South Asia and is still persistent in Eritrea, Ethiopia and Afghanistan when Lathyrus seed seed becomes the sole or main source of Nurturing for long periods. Research has shown that ODAP concentration in plants increases in extreme conditions (eg drought), aggravating the problem. Cultivation techniques are underway, which produce Lathyrus sativus plants with a lower concentration of ODAP. The toxic substance is present in different concentrations in different Lathyrus species, in many cases the poisonings come from unidentified Lathyrus species.
The traditional gastronomy of the dry regions of the interior of the Iberian peninsula involves the use of cracker flour (locally known as harina de almorta) for the preparation of creamy dishes, generally known as gachas.
The consumption of suitably selected, cultivated and prepared seeds of “L. sativus” in order to eliminate toxicity is part of Italian culture.
Recently, the Lazio, Marche, Molise, Apulia and Umbria regions have obtained the recognition of traditional Italian agri-food products from the Ministry of Agriculture, Food and Forestry, for the cichlids produced in various regions of the region.
As said, the seeds of Lathyrus sativus are consumed like peas and old ones since the very last days and the plant is still largely cultivated for food purposes especially in East Asia and Africa to combat famines because of its rusticity endures well Drought. For culinary tradition the cicerchia is still highly appreciated in many areas of Mediterranean Europe.
The Lathyrus sativus also provides an excellent fodder that is harvested before fruit ripening because seeds are toxic to animals.
In its identification confusion can be made; Because in the vegetative phase it is confusable with Lathyrus cicera L. which differs for the smaller flower (less than 16 mm) of red carminum; Lower leaves generally with a simple vulture; Legume (20-40 x 5-10 mm) not wedged, cut on the sutures, smaller seeds (less than 7.5 mm).
Historically, especially during famine, it was often the only food available, and this was more commonly caused by the rise of Latirism. But the cracker is also rich in protein and according to some traditions it extends its life. Here’s how to cook it between soups, soups and polenta, from Tuscany to Puglia and even in some parts of Sicily.
In a hypothetical rubric dedicated to the “mysteries of our food and wine”, a place of worship would certainly be to her: the cicerchia. A legume beloved, but also despised, a symbol of poor cooking but who knows why – so far has not managed to conquer the general public and then surely for fear and bad information about the emergence of latirism. There are also those who claim that the secret of longevity of the inhabitants of Campodimele (Latina) is in the cyst. Or it will be because cicerchia has always been synonymous with famine: when other crops failed, she resisted and became the only source of supply for the peasants in the worst vintages. What is the truth, then? Of course you have to work hard on traditional recipes that could boost the consumption of cicerchia in Italy.
In this regard, it should be said that the slight toxicity of the cicerchia can be broken down by some means. Like, for example, a long soak in lukewarm water for at least 24 hours. After rinsing them, the strawberries are then boiled in a pot, taking care to change the water for boiling, without saving it. The boiling times are quite long, higher than those of chickpeas and beans (perhaps using the pressure cooker).
Cicerchia is an ancient legume, known by the Romans and spread among Lazio, Tuscany, Umbria, Marche, Abruzzo, Molise and Puglia. It has a pleasant taste, similar to that of chickpeas but more delicate. It was once spread throughout the Mediterranean, and besides food of the poor during periods of famine, it also appeared in aristocratic canteens. Over time, however, he realized that eating plenty of cichlings or for too long periods could cause neurological disturbances. Which, if not cared for, could even lead to the spastic paralysis of the lower limbs and the consequent inability to walk. Only in the late nineteenth century did some Neapolitan doctors discover it, which linked these symptoms to some peoples of Abruzzo to the consumption of cicerchie and, precisely because of this, coined the term “latirismo” (or “neurolatirism”). Thus, in 50 years, progressively the cicerchia disappeared almost entirely from the tables of the Italians.

Preparation Method –
As seen to diminish the presence of neurotoxin, responsible for the toxicity of the cysts (toxicity that manifests itself, we repeat it with prolonged uses), the legume is subjected to certain culinary procedures.
A laborious procedure that certainly has not contributed to the popularity of the cicerchia in recent decades: not today, however, especially for vegetarians, always hunting for non-animal proteins. The cicerchia is rich in protein, including 26 to 30% of its nutritional composition. But also fiber, calcium, vitamin B and phosphorus. Not to mention, however, that varieties of very low ODAP content were selected. Then, in ciceronia, we must also look back on the rediscovery of Italian culinary traditions.
Let’s look at some of the ways to prepare the cicerchia, and we’ll get some typical dishes.

Umbrian Umbrian and Marche wines:
In this recipe, after having bathed in water and salt for 24-48 hours, it should be boiled for at least 2 hours and then drained. Everything depends, however, on the variety: in the Marche, for example, the crayon of Serra de ‘Conti (Ancona), with less bitter taste, requires 6 hours for soaking and 40 minutes for cooking. This, then, is the common procedure to be applied to each recipe based on brownies. In the Umbrian soup of strawberries, for example, when boiled, the strawberries are warmed in a pan with a sauce made with extra virgin olive oil, onions (or garlic) and tomatoes, enriched with rosemary, parsley, sage and mint in addition to salt And pepper. And with the addition of other extra virgin olive oil to raw. Some recipes include the addition of potatoes, pork chops and, in the frying pan, of carrots and celery. Alternatively, especially in the Marches, the recipe with lard or bacon is widespread.

Typical dishes of Abruzzo and Molise:
Cicerchia, in Abruzzo, inspired the “cicerchiata”, sweet very similar to the Neapolitan strudel where, however, our legume has nothing but the shape. Another interesting recipe comes from Molise: they are sagne and cicerchie, a kind of noodle where the cicerchie appear in a prepared sauce along with lard and chili. In the small region, like in Abruzzo, the cicerchie is also used as a flour for the preparation of a polenta (fracchiata) and the ru muocche, ie polenta with cicerchie, garlic and chili.

Typical Puglia dishes:
In Puglia traditional cuisine has instead elaborated the soup soup, prepared in Salento with spunzali (fresh onions), garlic, tomatoes and parsley. It is worth mentioning in Tuscany the cicerchia and spelled soup. In the Lower Ciociaria, the secret of long life would appear to be the laine and cicerchie, the typical long pasta probably deriving from the “laganum” of the Roman Apicius, which also derives today’s lasagna. However, the cicerchia is also great for preparing tasty summer salads or vegetarian burgers.