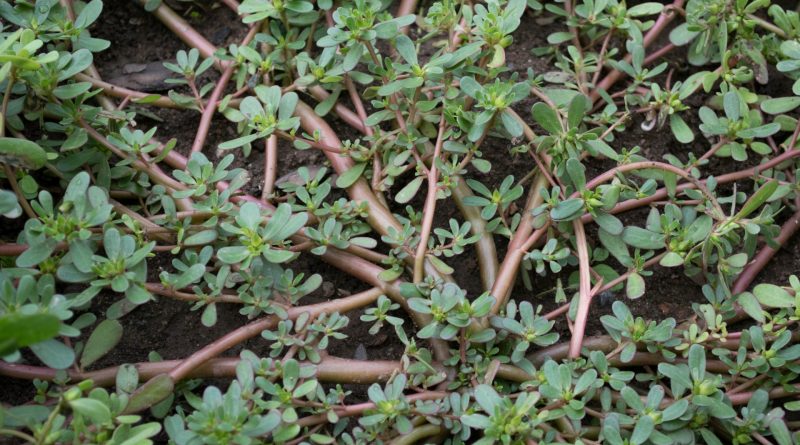 Etymology –
The porcelain has an interesting etymology. The common name refers to the predilection that have pigs for the plant, they eat it with pleasure, while the Latin binomial celebrated its use as a vegetable (Olera in Latin means vegetable) and the characteristic structure of the fruit, which has a sort the door membranous (portula in Latin) which protects the seeds.

Geographic Distribution and Habitat –
Probably of Asian origin, in the medicine of ancient Egypt it was used as a medicinal plant, and was cultivated during the Middle Ages in the Arab countries and the Mediterranean Basin, especially in Spain. Widespread in almost all regions of the world, in Italy it is common weed and is present throughout the territory.
In Saudi Arabia, the UAE and Yemen, are planted with different varieties of purslane sativa subspecies. In the United Arab cultivated varieties can be found in many vegetable stores to be used as a salad. In the southern regions of purslane, harvest in the gardens as a spontaneous, was sold in bulk from street during the years ’50 – ’60.
Habitat: sinantropa Plant, nitrophilous, infesting the summer irrigated crops on clayey soils, present in gardens and in ruderal environments and in populated areas where tenaciously colonizes the sidewalks; altimetry where you can find: 0 to 1,700 m s.l.m. 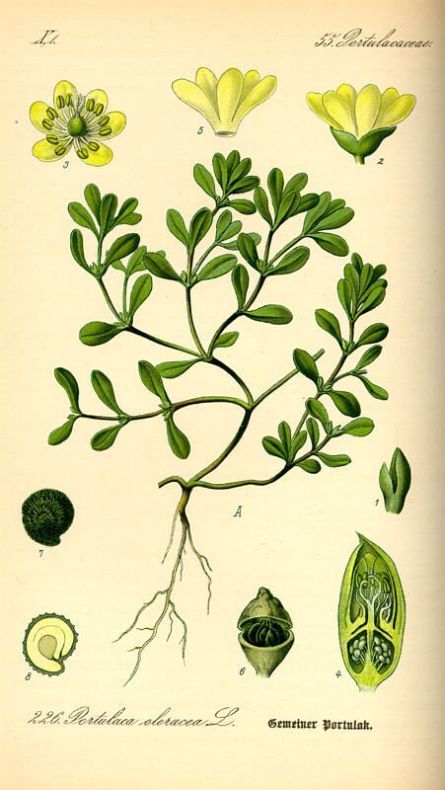 Cultivation –
For the cultivation technique read the following card.

Customs and Traditions –
Collecting in the wild and sometimes cultivated, it is eaten since ancient times as an aromatic herb in the Mediterranean regions. The medieval culture attributed to the plant an apotropaic value against evil spirits. If reports its culinary use at the court of Louis XIV, the Sun King, but over time the ingredient has fallen into oblivion, before a new discovery in time.
The raw leaves (and shoots), fleshy and slightly sour flavor, are eaten in salads, which give a higher bite; They are used to prepare tasty soups and refreshing and you can save pickle. They come also as an ingredient in omelets and stuffed.
In the Neapolitan cuisine was a harvest time along with the rocket from plants growing wild, and sold by street gardeners. Rocket and pucchiacchella were almost inseparable combination of the salad ingredients.
In Roman cooking purslane or Porcacchia it belongs to that mixture of various domestic and wild vegetables that are consumed raw in salads under the name of salad or salad mixture. In ancient times this salad took her home to ask the friars passing the offering to families, and in fact in Corsica purslane is still called “friar grass”.
The portulaca oleracea has different properties and contraindications. It is a herbaceous plant belonging to the family Portulacaceae particularly beneficial for the body’s health and well-known since ancient times: in fact, in fact, it was already widely known in ancient Egypt for its medicinal effects. The origins of this precious plant are thought to be Asian: purslane was cultivated in the Middle Ages in the Mediterranean area and in Arab countries. Today, unfortunately, the beneficial properties of this plant are underestimated in Italy – who does not know – is, in fact, considered a weed in gardens and orchards. But what are the uses and benefits of what is, instead, a valuable plant? Let’s find out.
The portulaca oleracea boasts considerable diuretic, purifying and refreshing: it is therefore possible to use it when you have high blood pressure, glaucoma, kidney failure, liver cirrhosis, heart failure, and more.
The portulaca oleracea is also used – in folk medicine – against disturbances such as vomiting and diarrhea: in fact it seems to be effective for the treatment of these problems, especially in cases of hemorrhoids, acute enteritis or post-partum bleeding.
This valuable plant is, then, a good source of polyunsaturated fatty acids of type omega 3: may, therefore, be considered an important plant source from this point of view.
By merit of its content of omega 3 fatty acids mentioned before, the portulaca oleracea can be considered an important ally for the prevention of cardiovascular diseases.
The omega 3 content in the portulaca oleracea fats help also lower LDL cholesterol and triglycerides: what promotes better blood circulation. There are also various herbal teas you can drink against high cholesterol.
The leaves of portulaca oleracea can be used as a compress against insect bites, acne – there are several remedies for acne skin – and eczema.
Finally, there are no particular side effects associated with taking such a plant, except in the case of allergies. In any case, it is worth pointing out that, before taking such a plant, you should consult the advice of your doctor.

Preparation Mode –
In Sicilian cuisine ‘in purciddana is used for the preparation of salads, such as ferragostana salad with tomatoes, cucumbers, onions seasoned with olive oil vinegar and salt; or the salad with boiled vegetables, where the leaves and young shoots are used purciddana with boiled potatoes and roasted onions. Another use is to prepare small pancakes Purciddana, where the tops of the plant – dipped in a batter of flour and water – are individually fried in hot oil and then served as appetizers or entrees.
An ancient natural remedy for the treatment of bronchitis is to use this herb to make an infusion of Portulaca oleracea.
Assunta in the form of infusion exerts a powerful anti-inflammatory and expectorant: it helps to thin the mucus bronchial favoring their elimination, soothes the tickly cough.