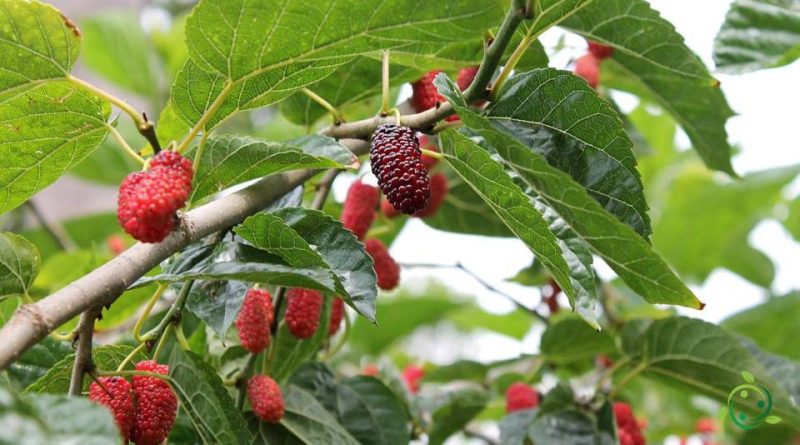 Mulberry is a plant that belongs to the genus Morus L. and to the Moraceae family.
These are plants largely native to Asia, but also widespread, in their natural state, in Africa and North America.

Suitable breeding habitat –
Mulberry is a plant with several subspecies. Some widespread in Eurasia and Africa and others also in North America. In Europe, Morus alba and Morus nigra are widespread.
The white mulberry (Morus alba L.) is a species native to central and eastern Asia.
Tree up to 15 m tall, it was imported to Europe with the silkworm feeding on its leaves. Until the middle of the twentieth century it had an enormous diffusion; then, with the emergence of synthetic fibers, the breeding of the silkworm has disappeared and with it also the white mulberry, degrading its habitat of diffusion.
The black mulberry (Morus nigra L.) is very similar to the previous species; it is native to Asia Minor and Iran and probably introduced in Europe in the sixteenth century.
The red mulberry (Morus rubra L.) is instead present in North America.

Propagation –
The mulberry is a very rustic fruit tree, whose cultivation does not present particular difficulties; it is a very resistant plant to climatic variability. Above all, the different varieties of mulberry can withstand temperatures as low as -15 ° C. It can therefore be grown from north to south, without particular difficulties.
Even at ground level, the mulberry tree can be grown almost everywhere. The plant grows well even in poor and arid soils, although more favorable conditions can increase fruit productivity.
The ideal is, however, to prefer soils with a neutral pH, with a good base processing and a fair amount of organic matter.
The propagation of this plant can take place by seed.
The seed germinates best if subjected to 2 – 3 months of cold stratification. However, it is advisable to sow the seed as soon as it is ripe; it usually germinates in the first spring, although it sometimes takes another 12 months.
The young seedlings should be grown in single pots and transplanted in the spring in the open field.
Propagation can also take place by cuttings, by making cuts of half-ripe wood of 7 – 10 cm. the engraftment reaches a good percentage, even if sometimes they fail to develop.
Alternatively, mature wood cuttings of the current season’s growth can be prepared, 25 – 30 cm with a basal portion of 2-year wood.

Ecology –
The Italian and European agricultural landscape of the past was very different from the current one.
This included the cultivation of the white mulberry (Morus alba) for the breeding of the silkworm, a strictly monophagous insect that feeds only on the leaf of this plant.
The disappearance of sericulture and the abandonment of mulberry cultivation has affected entire habitats so much that the ecological role of soil protection has generated, in many areas, together with the advent of intensive agriculture, a high hydrogeological instability and phenomena of progressive erosion and desertification of the soils, which are connected, on the one hand, to the abandonment of some marginal territories by farmers, on the other, to the practice of an agriculture that is not very conservative in terms of organic substance of the soil, as well as to climate change, the effects of which are beginning to become increasingly significant also in Europe.
In fact, the mulberry has a root system that deepens both vertically and horizontally, creating a dense network of roots. These harness the ground and even in sloping areas slow down the action of wind and water that flow on the surface of the slope, removing soil particles and causing them to accumulate downstream. The rapid growth capacity of the mulberry means that the plant is able to create a dense vegetation cover during the summer season, counteracting the force with which the droplets of rain impact on the ground and, therefore, reducing landslides. Trials conducted in China have shown that the planting of mulberry trees is essential in consolidating sloping lands, whether these are natural or subject to terracing by man. It has also been verified that in these environments, in the event of prolonged periods of drought, the foliage of the mulberry tree creates a cooler microclimate of a few degrees compared to the surrounding area, not covered by vegetation. What makes this plant essence interesting compared to others, however, is the ability to produce leaf for sericulture and plant or woody biomass for different purposes, even in soils poor in nutrients, with limited quantities of water and even, for some variety of mulberry, in saline or calcareous soils. Due to these excellent characteristics, the plant has also been used in the recovery of desert environments, with strong reaction anomalies (pH), or polluted by heavy metals (landfills).