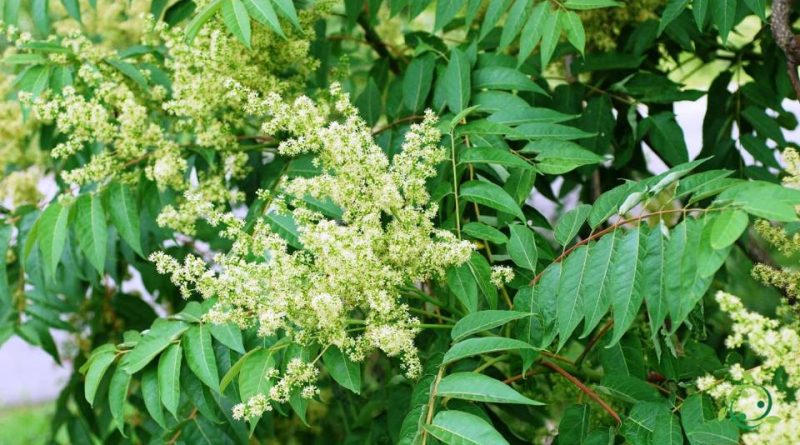 Reproduction of the Tree of heaven

The Tree of heaven, ailanthus or varnish tree (Ailanthus altissima (Mill.) Swingle) is a deciduous tree belonging to the Simaroubaceae family native to Southeast Asia but naturalized in Italy and other European countries, as well as in several Asian countries, in United States of America, South Africa, Australia and New Zealand.

Suitable breeding habitat –
Ailanthus altissima, as mentioned, is a plant native to northern and central China, Taiwan and North Korea.
Historically it was widely distributed and the fossil record clearly indicates that it was present in North America until the middle Miocene.
In Taiwan it is present with the Takanai variety.
In China it is native to all provinces except Gansu, Heilongjiang, Hainan, Jilin, Ningxia, Qinghai, Xinjiang and Tibet.
Around 1700 it was introduced in many regions of the world and is now found on all continents except Antarctica.
The tree prefers moist and clayey soils, but is adaptable to a wide range of soils and pH levels. It is drought tolerant but does not tolerate flooding. It also does not tolerate intense shade.
In China it is often found in areas rich in limestone.
It is a tree that grows in various climatic conditions but in its range of origin it is found at high altitudes in Taiwan and at lower altitudes in mainland China.

Propagation –
For the propagation of Tree of heaven, it should be borne in mind that it is a fast-growing plant: on average for each year it has one meter in height and 1.5 cm in diameter, reaching about 25 meters when ripe; from this tendency to become tall in a short time, the name “tree of paradise” is derived. It has little longevity, rarely exceeding 50 years of life and exceptionally the century of life. Despite this, its extraordinary ability to generate suckers allows the plant to replicate itself for much longer times.
Due to these characteristics it is a plant that has all the characteristics of the pioneer species, i.e. the first to colonize lifeless environments, due to human or natural factors: strong resistance to intense light, rapid growth, limited longevity, early reaching of maturity and therefore of the production of seeds, anemophoric dissemination, vegetative reproduction through suckers, the ability to thrive in adverse conditions, even in shallow and nutrient-poor soils.
There are some cultivated varieties of this species:
– Ailanthus altissima var. Hongyea – with decorative leaves of bright red color;
– Ailanthus altissima var. Tsubaki – with a thousand hair;
– Ailanthus altissima var. Xiaoye – cultivar with a denser foliage than the nominal species;
– Ailanthus altissima var. Erythrocarpa – with bright red fruits;
– Ailanthus altissima var. Pendulifolia- with leaves even longer than the nominal species and elegantly hanging.
The plant propagates by seed, by dividing the basal or root suckers and also by apical branch cuttings.
Sowing is carried out by burying seeds in a specific, mostly sandy and fertile substrate.
The apical cuttings or suckers (removed from the base of the mother plant), are put to root in a mixture of peat and sand in equal parts.
The new plants must be transferred to the home in the following spring.
Ailanthus altissima should be planted away from other types of trees to avoid antagonism or radical competition due to the phenomenon of allelopathy as it secretes a toxin that prevents other tree species from taking root in its vicinity.

Ecology –
Tree of heaven, as mentioned, was imported in the 1700s from north-western China and has now naturalized throughout south-eastern Europe, the United States, Australia and New Zealand.
Its cultivation spread especially in the second half of the 19th century, as a host plant of a bombyx (Samia cynthia), whose cocoon provided a kind of silk. Failed this attempt, the plant remained and due to its adaptability it naturalized and spread everywhere in Italy also because it was cultivated for ornamental purposes and for reforestation.
Ailanthus, also due to the phenomenon of allelopathy, is a very fearsome competitor, capable of literally creating scorched earth around itself, so much so that it is considered a dangerous pest.
For this reason, its intentional introduction must be carefully evaluated in order to avoid significant interference in the ecological populations of entire habitats.
The species is, in fact, very rustic, has no preferential habitats and can adapt to any type of soil and water regime: it also grows on arid and rocky soils, tolerates lack of nutrients and prolonged drought. It reproduces, as mentioned, both by seed and by vegetative way. The samara, the dry fruit with a membranous wing, is carried over long distances by wind and water. One plant can produce up to 300,000 samaras per year. The ailanthus propagates to a considerable extent also by vegetative means by means of the extensive and vigorous root system, capable of generating numerous suckers from which daughter plants originate. The great invasive capacity of this species is due precisely to the presence of multiple propagation mechanisms: the samaras allow a rapid colonization of new stations, reached which the plant begins to expand vegetatively, thus determining the rapid consolidation of the species in a specific area. The young seedlings have a high growth rate and a remarkable vegetative vigor.
In Italy, the species is permanently established in all Regions and its diffusion is worrying in many parks and protected natural areas (woodland habitats of hills and low mountains, river areas, arid meadows, plains) in which it forms pure and monotonous populations that threaten the Mediterranean plant communities.