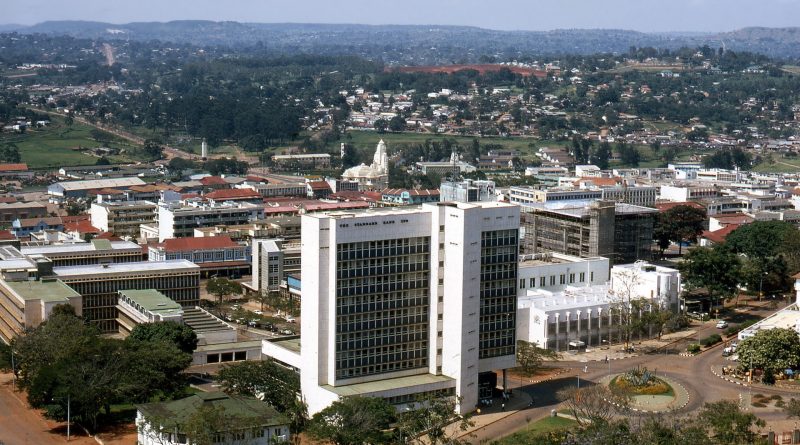 Uganda is a Republic of East Africa, with Kampala as its capital.
Uganda is a republic with a non-party political system; currently the head of state is Yoweri Museveni and the head of government is Robinah Nabbanja. The official languages ​​are English and Swahili, while the traditional costume is Kanzu. Its name derives from the ancient Buganda kingdom, which included the southern section of the country, which includes the capital Kampala.
Uganda has a population of 46,000,001 (as of 2020) and its capital is Kampala, with a population of 1,507,080 inhabitants (as of 2014).

Geography –
Uganda borders South Sudan to the north, Kenya to the east, Tanzania and Rwanda to the south and the Democratic Republic of Congo to the west; it has no outlet to the sea. The southern part of the territory includes a substantial part of Lake Victoria which, for the rest, belongs to Kenya and Tanzania.
The territory of Uganda is characterized by the presence of numerous lakes, rivers (the most important of which is the White Nile), equatorial forests and savannas. In the southern part it is crossed by the Equator. It has a total area of ​​241038 km², 36 330 of which are inland waters.
Much of the town is located on a plateau at about 1000 m a.s.l. with a rather rich climate of rainfall; only the northern part is semi-arid. The lowest point of the country is in correspondence with the lower course of the Nile at about 610 m a.s.l. while the highest peak is Mount Stanley (5110 m a.s.l.) in the Ruwenzori chain.

Climate –
Uganda is an African country crossed by the Equator, whose climate is mitigated by the altitude. In fact, most of the country is crossed by a plateau, which has a variable height between 1,000 and 1,400 meters, and whose climate is pleasantly warm, with average temperatures ranging between 20 and 25 degrees, and rainfall between 900 and 1,500 millimeters per year. The temperature variations during the year are contained, however there is a warmer period from December to March, more noticeable in the north, and a cooler period from June to September. Generally the temperatures are pleasant, although sometimes it can be very hot during the day, especially from December to April, while at night it can be cool or even cold depending on the altitude, and this can happen all year round, but especially from June to August.
As for the rains, they occur in the form of showers or thunderstorms in the afternoon or evening: even when they do not bring abundant rain, thunderstorms with thunder and lightning can break out all year round, especially in the south. The least rainy areas are the south-western one, on the border with North Kivu and Rwanda, and the north-eastern one: in both it drops below 1,000 mm per year, but the north-eastern one (where the Kidepo Valley is located National Park and the Matheniko Wildlife Reserve), projected towards the arid areas of Kenya, is more exposed to the risk of experiencing drought periods. The wettest areas are instead the central-northern ones (Gulu region) and some shores of Lake Victoria (see Entebbe), where 1,500 mm per year are reached or exceeded.
In the north there is a hot and dry period from December to February, which sees the prevalence of currents from the north-east, originally coming from the arid regions of Sudan and Eritrea, and a rainy period, and a little less hot but more sultry, from April to October, where the wetter currents from the Congo prevail. The fact that the hottest period is also the driest is an anomaly compared to other tropical areas, where generally the dry season is the least hot.
In the north-west, around Lake Albert (whose banks are located at 620 meters) and along the course of the Albert Nile, the altitude drops below 1,000 meters, and the heat becomes more intense. The western part of the Victoria Nile, where the Murchison Falls are located, also flows at an altitude of less than 700 meters: here the daytime temperatures from December to March are 32/33 ° C, with peaks of 40 ° C. In other areas, however, it exceeds 1,500 meters, and at night it can be very cold.
In the center-south, crossed by the Equator, temperatures are more stable, however even here there is a slightly cooler period from June to September, when the relatively cool currents from the south-east prevail, coming from the Indian Ocean and from the highlands of Tanzania. Furthermore, in this area there are two rainy periods, from March to May (called the “long rains”) and from the end of September to December (called the “short rains”), alternating with two relatively dry periods (January-February and June- August): this happens because at the equator the sun passes to its zenith twice a year (at the end of March and the end of September), and due to the thermal inertia of the soil and the atmosphere the effect carries over into the following weeks. 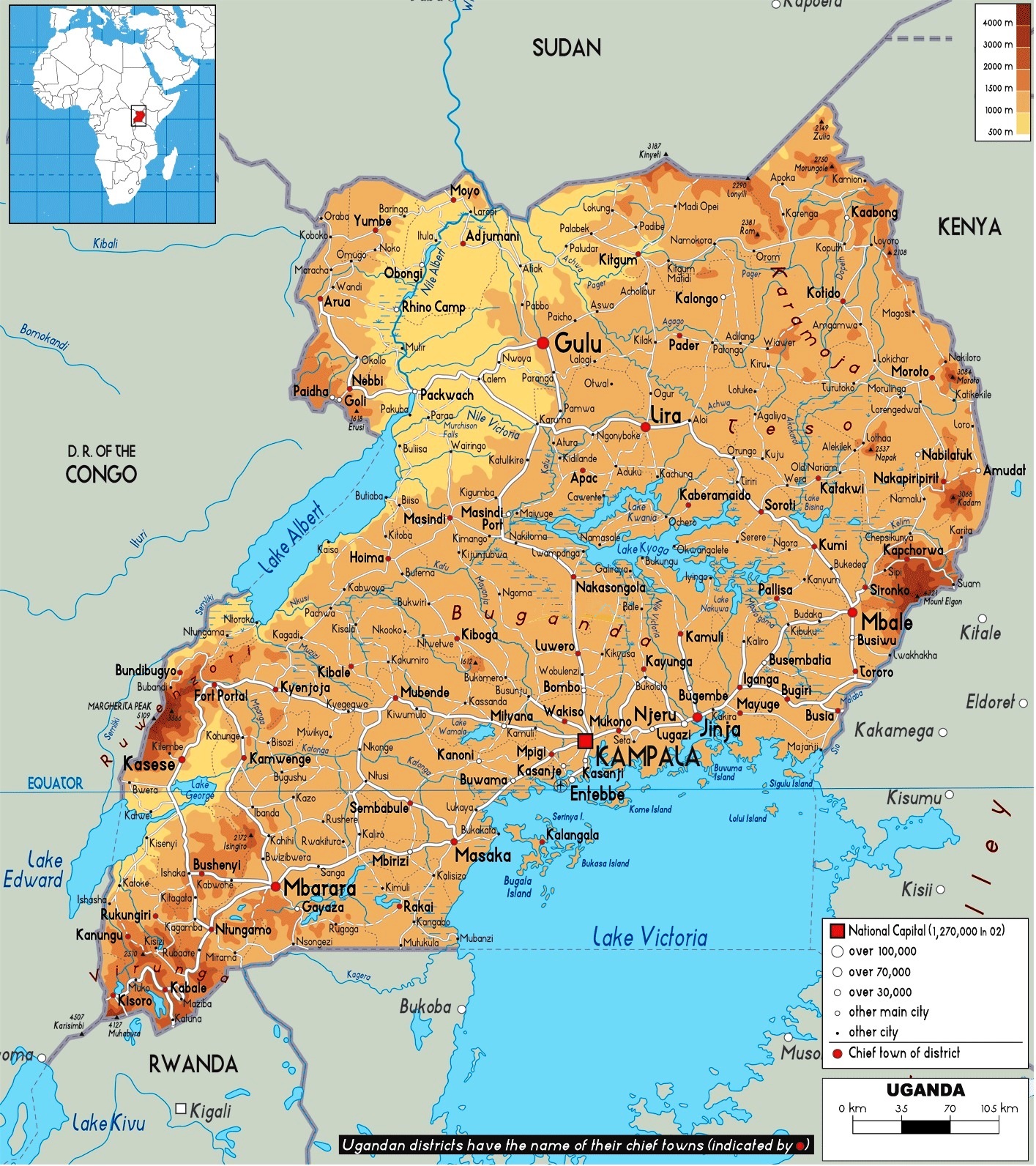 Fauna –
In a territory as heterogeneous and diversified as that of Uganda, there is consequently a great variety of natural environments: it ranges from semi-arid steppes to the equatorial forest, from high mountain moors to extremely fertile plains, from wooded savannahs to swamps and to the marshes around the country’s many freshwater basins, from the high mountain glaciers of the Rwenzori mountains to the flow of rivers surrounded by tunnel forest. To such environmental and therefore climatic diversity, it is obvious that a very high degree of biodiversity must correspond with an enormous wealth of animal and plant species.
Among the species encountered in Uganda we remember the Kudu; this is the second highest antelope species after the Eland, with a distinct hump at the shoulder and with a fur marked by up to 10 white stripes. Males have a long mane along the neck and beautiful spiral horns. Their horns start growing between 6 and 12 months of age and reach a maximum weight of 315 kg. They can extend a great distance in search of water, especially in dry seasons. The Kudu in Uganda can be seen in the Kidepo Valley National Park in the northwest of the country.
Kudus are commonly seen in small groups of 4-6 or separate herds of male bachelors. They feed at night, early in the morning and in the evening, resting during the hottest hours of the day. They are very agile and can jump 2.4m to jump over obstacles.
Another mammal is the Jackal. This is a member of the canine family and looks more like a fox than anything else. It is also called a black-backed jackal. Among the dog species, fossil deposits of the jackal revealed that the black-backed jackal is one of the oldest known of the species seen on a safari in Uganda.
It feeds on the remains of dead animals and sometimes hunts small animals such as lizards and insects.
Usually hunts alone during the night; his hunt begins at sunset and ends at dawn. A Jackal couple stays together for years or even for life. Both parents take care of the puppies.
As for birdlife, Uganda is known for the presence of some birds of considerable wildlife interest.
Among these, the African green broadbill (Pseudocalyptomena graduerai), a bird of rare beauty, the African green breed was first discovered in 1908 and then no longer seen for the next twenty years. It is a small, plump bird, with bright green plumage and a pale blue tinge to the throat, chest, base of the short tail, and feathers covering the ears. The forehead is buff, finely streaked with black, and a narrow black stripe crosses the eyes. Its broad, flattened and slightly hooked beak is black, as are its claws.
This beautiful bird can only be seen in two places in the world: the Itombwe Mountains in the Democratic Republic of the Congo and the Bwindi Forest in Uganda. The species is at risk of extinction due to the loss of its habitat, the clearing, and the degradation of the forests.
We also remember the Blue-tailed Kingfisher (Alcedo atthis). A bird with a plumage that has a rather showy color; the chest, the neck and part of the head are bright blue, as well as the wing spot and the tail. Belly, undertail, flanks and throat are white, while the top of the head tends to greyish. It feeds mainly on insects. To get food, it positions itself on branches or reeds protruding over the waterways where it lives, which it elects as observation points and from which it dives to capture its prey.
Occasionally it feeds on small fish. It nests in unlined cavities dug alongside termite mounds.
Another bird to be observed is the African goshawk (Accipiter tachiro); this is an ambush hunter, waiting on a perch until prey is observed, then swooping down to catch him. It mainly catches small and medium-sized mammals and birds. Pairs occasionally hunt cooperatively with large congregations of prey, such as bat huts or invertebrates. The claws of the first and second toes are very strong and are stabbed into the prey until it stops moving. After the capture, it feeds on the ground or on the lower branches of the trees, with the exclusion of the reproduction period, when all the preys are consumed directly in the nest or in the more usual surrounding branches or perches. It lives in dense vegetation, even evergreen, in the mountain forest and in the wood.
The nest is built primarily by the female, consisting of a stick platform lined with green leaves, such as pine needles, lichen, and mistletoe. It is generally placed on a branch away from the main trunk of a tree, especially if it has dense vegetation.
Finally, among the birds that can be observed in this country, we remember the African black duck (Anas sparsa). This bird is quite common in both South Africa and Zimbabwe, with small populations in other southern African countries. He is a river specialist, rarely straying from rivers and streams. Its diet is not well known, but it is thought to eat more invertebrates than plant products. The female builds the nest, which is a deep bowl made of plant matter, placed near the water. It lays 4-11 eggs, which are incubated exclusively by the female. The ducklings are looked after by their mother, who is always on the lookout for predators. Chicks can usually fly at 77 days, after which they become independent.
She is sedentary, mostly staying in the same place throughout her life.