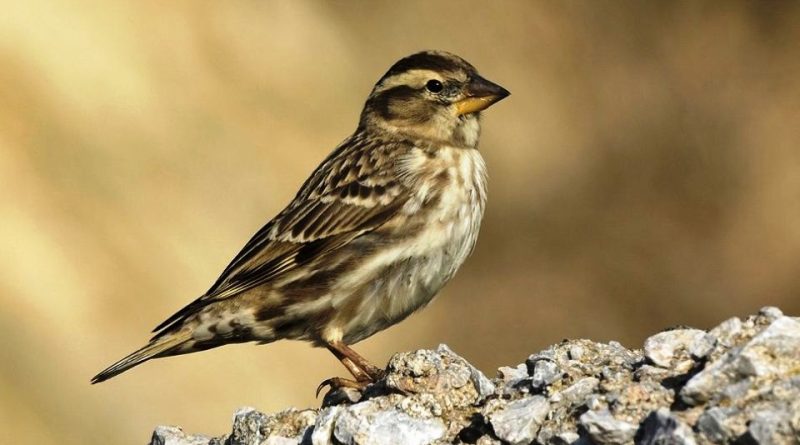 The rock sparrow or rock petronia (Petronia petronia, Linnaeus, 1766) is a bird belonging to the Passeridae family.

Geographic Distribution and Habitat –
Petronia petronia is a bird widespread in the areas of southern Europe, Asia and North Africa.
In Italy it is found in the southern areas.
Its ideal habitat is represented by mountain districts well exposed to the south, consisting of lean pastures and stony ground. However, it also lives and multiplies in man-made areas – including cities – not fearing the proximity of man. In any case, it adapts to a variety of environments, from sea level up to 2,000 meters above sea level. 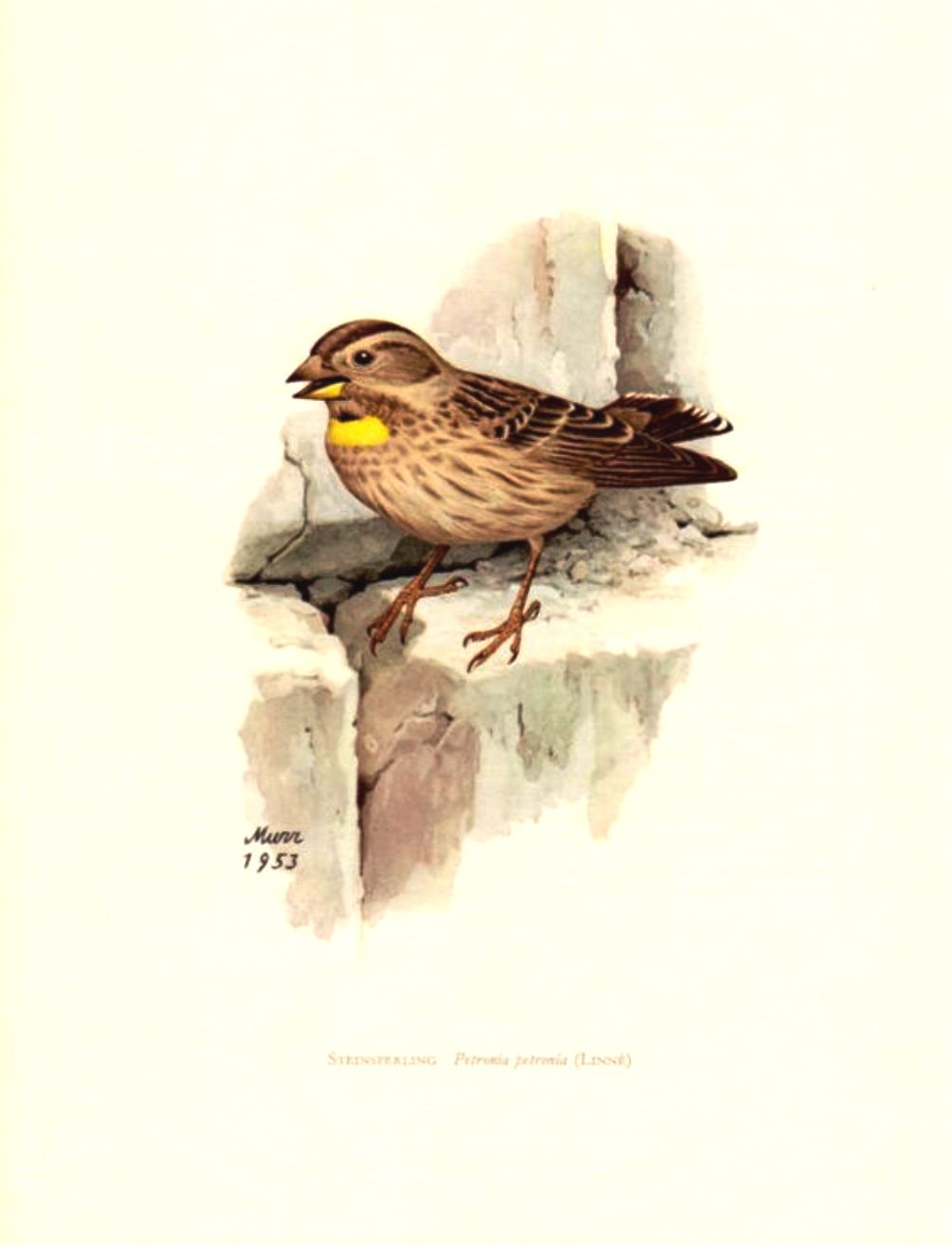 Description –
The rock sparrow is recognized by the presence of a yellow spot on the chest.
It is a passerine with a length of 15-17 cm, with a wingspan of 28-32 cm and a weight that oscillates between 24 and 37 grams.
It has a color tending to light brown, with dark brown and black streaks, on the back and wings, while the chest has lighter brown streaks, a nice yellow eyebrow, characterizes the head. Male and female are almost indistinguishable.
The Petronia petronia is also recognized for its high-pitched and penetrating song which resembles a rapid and accelerated “creak”, which is not difficult to hear at the farmhouses and ruined buildings where it loves to build its nest, on the edge of mountain villages.

Biology –
The Petronia petronia, as mentioned, nests on the edge of mountain villages, even in the hollow of the trees and among the rocks. The female, after having built the nest, lays 4-8 dirty white eggs with dark reddish spots and marks.
These sparrows exhibit a variety of mating patterns, notably monogamy and sequential and simultaneous polyandry; however, social monogamy is the most abundant mating pattern. The frequencies of these various mating patterns most likely vary based on numerous ecological and social factors. Many studies have shown that both males and females prefer a mate with a larger yellow spot. Defensive behaviors of the male brood have also been shown to increase with greater female ornamentation. Males also choose their mate better on the basis of her adornment. However, this behavior is not observed in females. In the Alpine colonies of Petronia petronia, the females take care of most of the supply. In the Asian colonies, both males and females contribute equally to the care of the young. Larger breeds feed their young with better capacity which suggests that larger males occupy better territories and / or are better fathers.
Females increase the number of visits to the nest without feeding as the season progresses, suggesting that since females have fewer opportunities to lay more broods, it is more beneficial to support the survival of their current offspring.
Furthermore, a positive relationship was recorded between the number of defecting females and the number of males available.

Ecological Role –
The first formal description of Petronia petronia was by the Swedish naturalist Carl Linnaeus in 1766 in the twelfth edition of his Systema Naturae. He initially introduced him He introduced the binomial name Fringilla petronia.
Subsequently changed, as the only species of the genus, by the German naturalist Johann Jakob Kaup in 1829.
Petronia petronia is a sparrow that feeds mainly on seeds all year round and on berries in autumn. In spring, its diet includes invertebrates, especially caterpillars and grasshoppers. This food is also part of the feeding of chicks.
This species is subjected to some threats including, above all, the abandonment of traditional agro-pastoral practices.