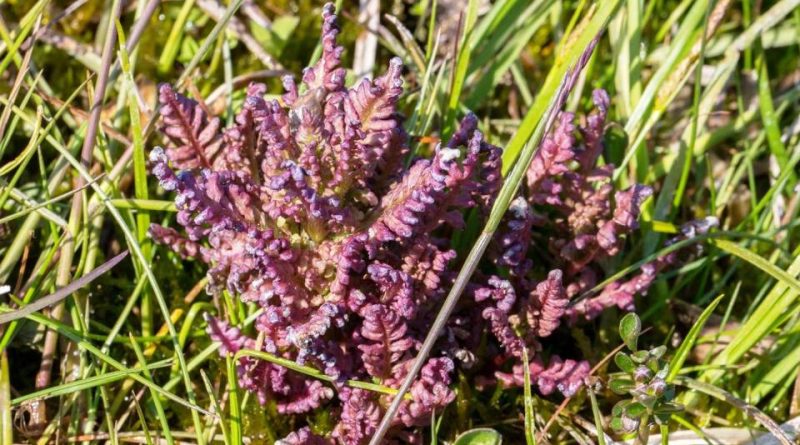 The marsh lousewort or red rattle (Pedicularis palustris L., 1753) is a parasitic herbaceous species belonging to the Orobanchaceae family.

Etymology –
The term Pedicularis comes from pedículus louse, due to the ancient popular belief that this plant was the bearer of lice for the livestock that ate it.
The specific epithet palustris comes from pálus, palúdis swamp: marsh, due to the habitat in which it grows.

Geographic Distribution and Habitat –
Pedicularis palustris is a plant with a vast range as it is present in central and northern Europe and in Asia. In Europe, it is found from Scandinavia, southward across most of the continent at altitudes of up to 1,200m.
In Asia it is present in Russia, Kazakhstan, Mongolia and northern China.
In Italy it is a rare species and is found only in the north especially in the Alps. Beyond the border, again in the Alps, it is present in all sectors (less present in the Maritime Alps). On the other European reliefs connected to the Alps it is found in the Black Forest, Vosges, Jura Massif, Central Massif, Balkan Mountains and Carpathians.
The typical habitat for this plant are peaty meadows on acid soil; but also low bogs. The preferred substrate is calcareous / siliceous but also only siliceous with neutral pH, low nutritional values ​​of the soil which must be very humid or wet.
From an altitudinal point of view it is present up to 1900 m a.s.l. 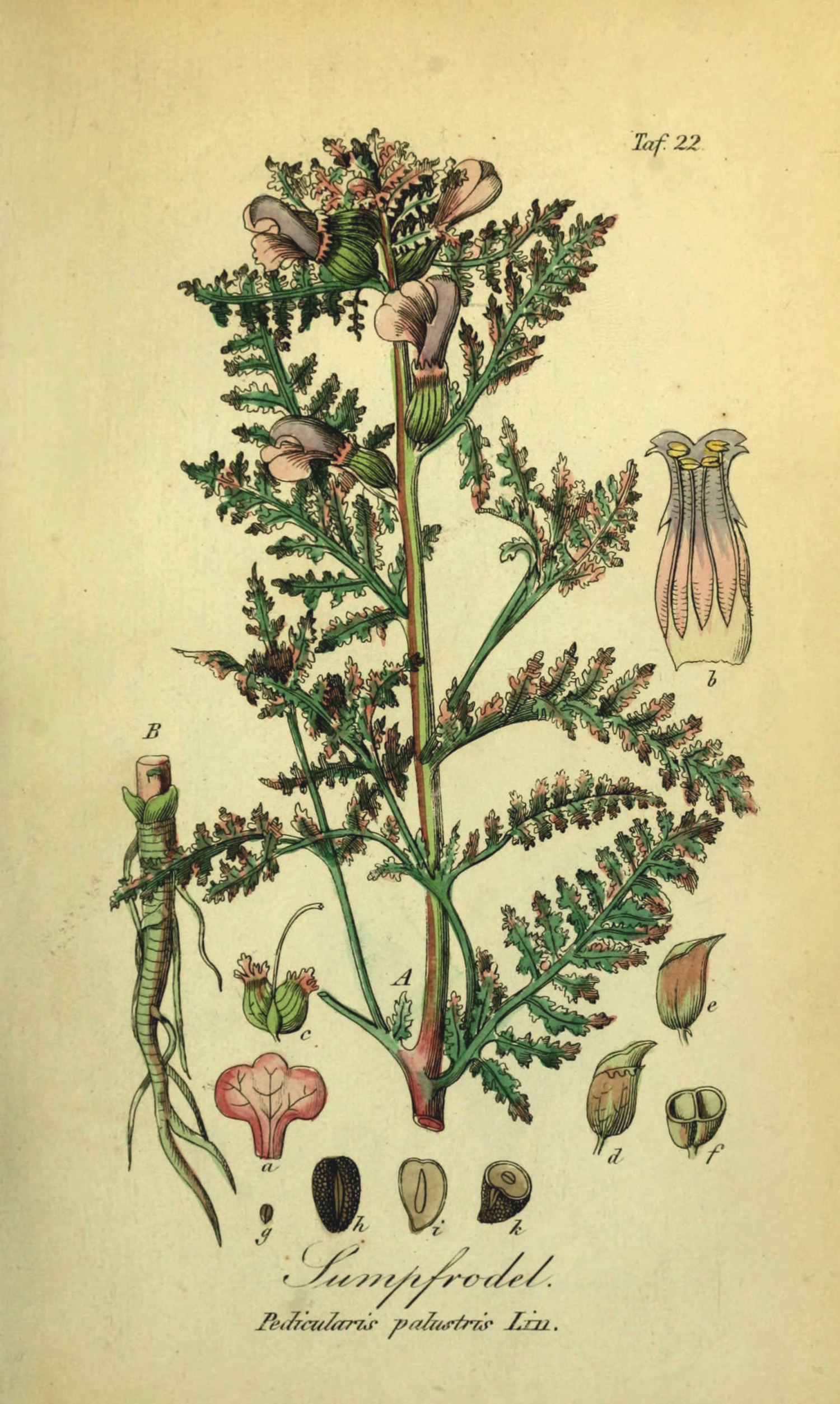 Description –
Pedicularis palustris is a biennial plant with a very branched stem, usually erect, up to 60 cm high.
The leaves are alternate or opposite, with a short petiole. The leaf blades are triangular-lanceolate to linear, with pinnate lobes and toothed margins.
The inflorescence is a raceme with leaf bracts. Each bilateral symmetry flower has a short stem and a large, rounded and toothed calyx. The flower is purplish-red in color and up to 2.5 cm long, with five petals fused into a tube, the upper lip is slightly shorter than the lower lip.
The antesis runs from April to the end of July.
The fruit is a capsule.
There are morphological differences between the different subspecies.

Cultivation –
The marsh lousewort is a hemiparasitic plant that attaches itself to the roots of other nearby plants, from which it draws part of the nutrients it needs.
The flowers are pollinated by honey bees and bumblebees; these land on the lower lip, which is lowered under their weight, allowing them to put their heads inside the flower and extract the nectar and, at the same time, to smear themselves with pollen.

Customs and Traditions –
Pedicularis palustris, as mentioned, is a semi-parasitic plant, whose roots suck nourishment from adjacent plants.
These plants were used in Sowa-Rigpa, the Himalayan art of healing which is a traditional system of medicine for treating various ailments in humans. However, a complete collection on this valuable medicinal plant is not available. On this species, studies have been performed to clarify its role on some salient medicinal properties with respect to various health problems and diseases.
Research has been carried out on plants in the Changthang region of Ladakh (India) and the findings have led to new developments.
The genus Pedicularis, to which P. palustris belongs, includes about 600 species (83 of which are found in India) which contain some active ingredients. The main phytoconstituents are phenols, phenylethanoids, phenylpropanoids, flavonoids, iridoids, lignans and alkaloids. The existing literature shows that these compounds possess antioxidant, immunomodulatory, anti-inflammatory, antidiabetic, antibacterial, antifungal, analgesic, antitumor, hepatoprotective, neuroprotective, muscle relaxant, antifatigue, diuretic, antipyretic, antithrombo, antihemolysis and DNA repair properties.
This medicinal herb is used in the treatment of leukorrhea, fevers, infertility, rheumatism, general weakness, collapse and urinary problems and to revitalize blood circulation, improve digestion and maintain vitality.
In addition to phenols, terpenoids, flavonoids, lignans, tannins, iridoids and phenylpropanoid glycosides are also among the active constituents responsible for multiple health effects. However, more in-depth research is needed to characterize the various phytoconstituents of Pedicularis to explore their modes of action at the molecular level and identify other beneficial applications that can harness the enormous medicinal potential of this important herb.
Among other things, it should be remembered that Pedicularis palustris is a plant that also contains toxic principles, especially in the roots.

Preparation Method –
Of the Pedicularis palustris, the whole plant or parts of it are used in the Sowa-Rigpa traditional medicine techniques of the Himalayan regions.