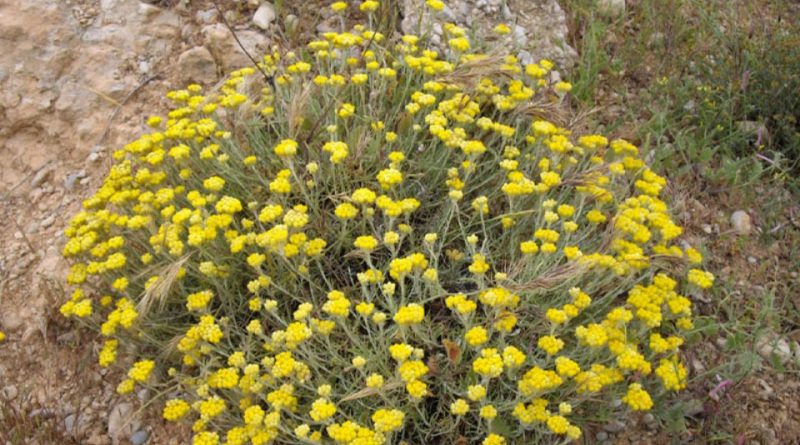 Etymology –
The term Helichrysum comes from the Greek ἥλιος hélios the sun and from χρυσόϛ chrysós oro: reference to the golden yellow color of the flowers of many species belonging to this genus.
The specific epithet stoechas veien from the Greek στοιχώδες stòichódes in a row, aligned: referring to the islands of Hyeres (of which the largest is Porquerolles) formerly known as Στοιχάδες νῆσοι Stoichádes nesoi Stecadi Islands, an allusion to their alignment seen from the routes traveled by sailors.

Geographic Distribution and Habitat –
Helichrysum stoechas is a plant native to Europe where it is found mainly in the southern and western area.
Its habitat is that of the coastal scrublands and scrublands of the western Mediterranean regions. In Italy it is a rare species and is found in patches along the Tyrrhenian coast up to 800 m a.s.l. 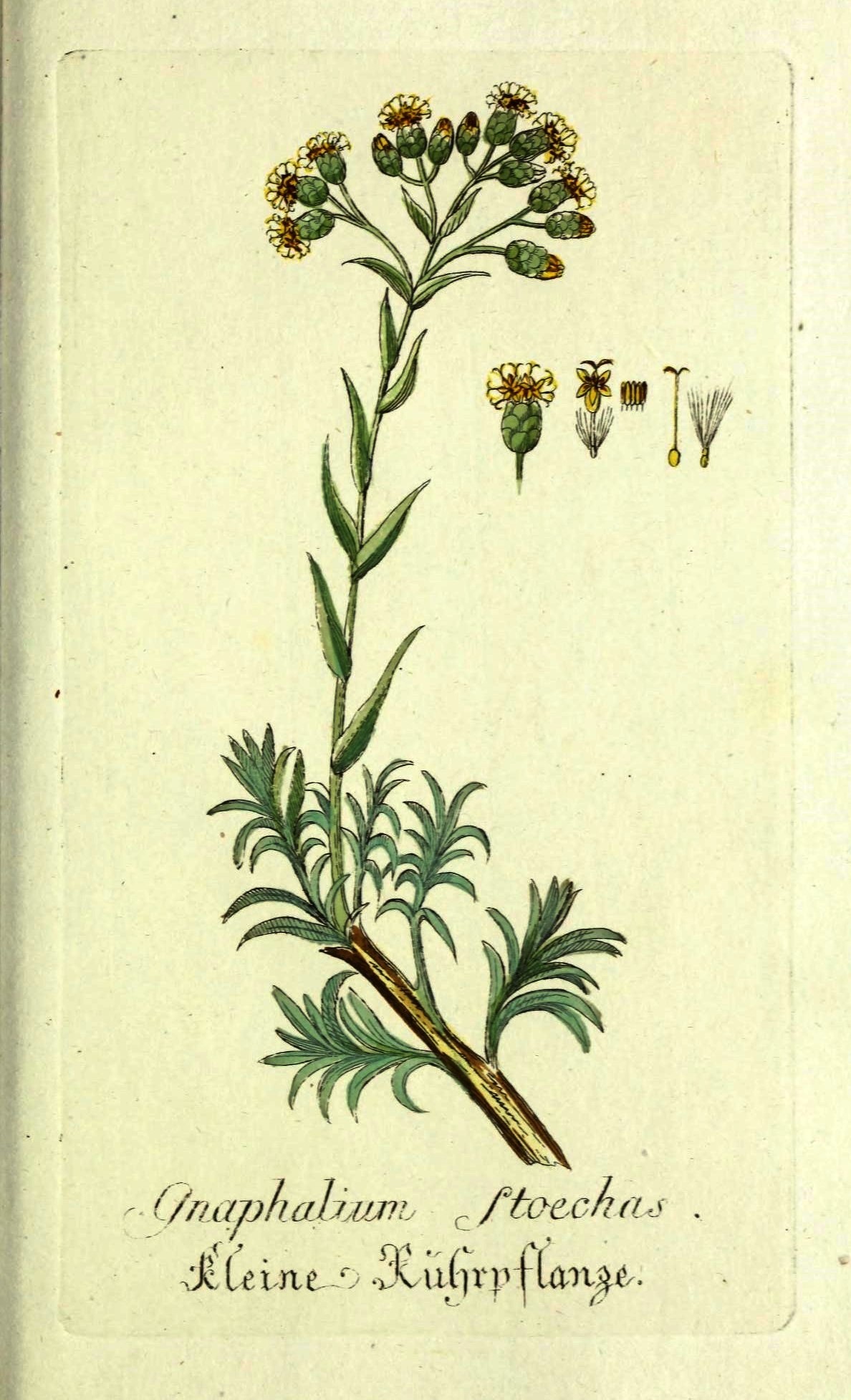 Description –
Helichrysum stoechas is a shrub species, perennial suffruticosa 15-30 cm tall.
It has thin, spindle-shaped roots, arranged horizontally in the ground.
The stems are branched woody forming a dense basal pulvinus, white-tomentose for frizzy hairs forming a thin layer, which in the stems and leaves eventually tends to detach, revealing the underlying parenchyma.
The whole plant has a pleasant aromatic smell.
Presence of numerous leaf bands at the base of the leaves, covered by a white tomentum.
The leaves are alternate, patent, linear, filiform, 15-35 mm long and 1 mm broad, with a completely revolute edge, tomentose, gray-green or gray-ashy in color.
The flowers are gathered in heads of about 20 flowers each, in turn inserted in dense terminal corymbs often glomeruliform of 16-30 elements; flower heads with hemispherical envelope of glabrous, irregular, pale yellow scales, at the end brown, the upper ones acute; flowers 3.5 – 4 mm long, light yellow in color, all tubular with a widening tube in the upper half and 5 triangular teeth; stamens inserted into the tube; inferior ovary with stylus inside the tube.
It blooms from May to August.
The fruit is a 3-5 mm long achene, ovate-oblong in shape, with the papillose surface extending into a thin beak.
If burned when dry, it gives off a pleasant smell.

Cultivation –
Helichrysum stoechas is a plant that grows spontaneously but can be grown on light and well-drained soil, both in a sunny and sheltered position. It is a plant that is intolerant to excessive humidity and adult plants are resistant to drought.
This species is not hardy in colder areas as it tolerates temperatures down to about -10 ° C.
Propagation can take place with sowing to be carried out in the late winter period, in the greenhouse or early spring in the open field. The seed usually germinates in 2 – 3 weeks at 20 ° C. the transplant in open field should be done in late spring or early summer, after the last frosts foreseen.
The plant can be propagated by semi-woody wood cuttings, taking portions of 5 cm in the period of early summer; these will normally root with a good percentage within 4 weeks.

Customs and Traditions –
The Mediterranean strawflower is an aromatic plant with beautiful foliage, of which there are several varieties selected for their ornamental value.
The leaves of the helichrysum provide a moderate curry aroma and can be used to flavor risottos, soups, poultry meat and fillings.
This plant is also used in the medicinal field. It has properties completely similar to those of the more common Helichrysum italicum (Roth) G. Don, namely: antiallergic, anti-inflammatory, anti-erythematous, photoprotective, expectorant, anti-catarrhal, cicatrizing, anti-hepatotoxic, spasmolytic, hypocholesterolizing, antibacterial, antifungal, astringent, asthmatics.
The plant contains tannin, helichrysene, resin, helichrysine (coloring substance) mucilage, an essence consisting of nerol, pinene, fufural, linalool, aldehyde, isovalerianica; then ursolic and caffeic acids.
The flowers of Helichrysum stoechas are widely used, due to their compactness and their long-lasting yellow color, in dry flower arrangements and potpourri.
It can also be used as a dyeing plant.
This plant was once burned indoors to purify the air.
The plant was also used by the Romans to adorn the statues of the gods and was linked to the cult of the Sun and the symbol of eternity.

Preparation Method –
Both the entire plant and the flowers or the tops of this plant are used for medicinal uses, to be honest, much less than in past times.
In addition, the leaves give a moderate curry aroma and can be used to flavor risottos, soups, poultry meat and fillings.