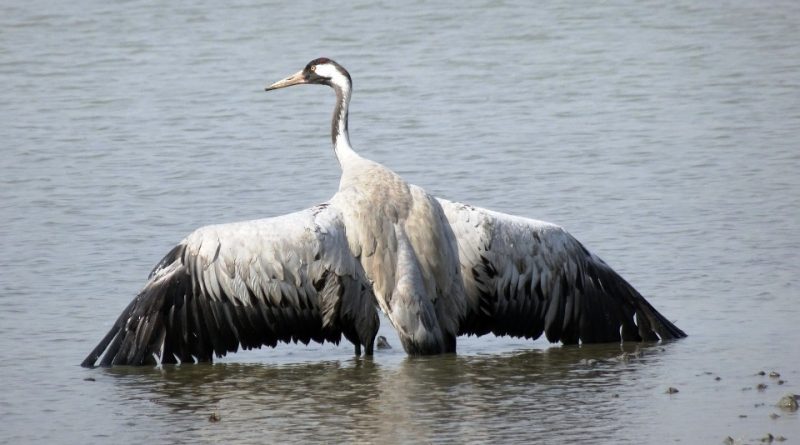 The common crane (Grus grus Linneo, 1758) is a bird belonging to the Gruidae family.

Geographic Distribution and Habitat –
The Crane is a bird that reproduces in central, northern and eastern Europe, from the Balkans to Russia, up to Mongolia and Asia Minor. Return to the Italian skies in autumn, rarely to stop over the winter. More often to reach northern and eastern Africa, where this species spends the winter. In Italy, the very few wintering individuals have been recorded in western Sardinia, Sicily and on the middle Tyrrhenian coast.
The crane is a migratory bird (with the exception of some very particular areas), capable of traveling very long distances with the classic V-shaped flocks. the Mediterranean region (including North Africa and the Iberian Peninsula). 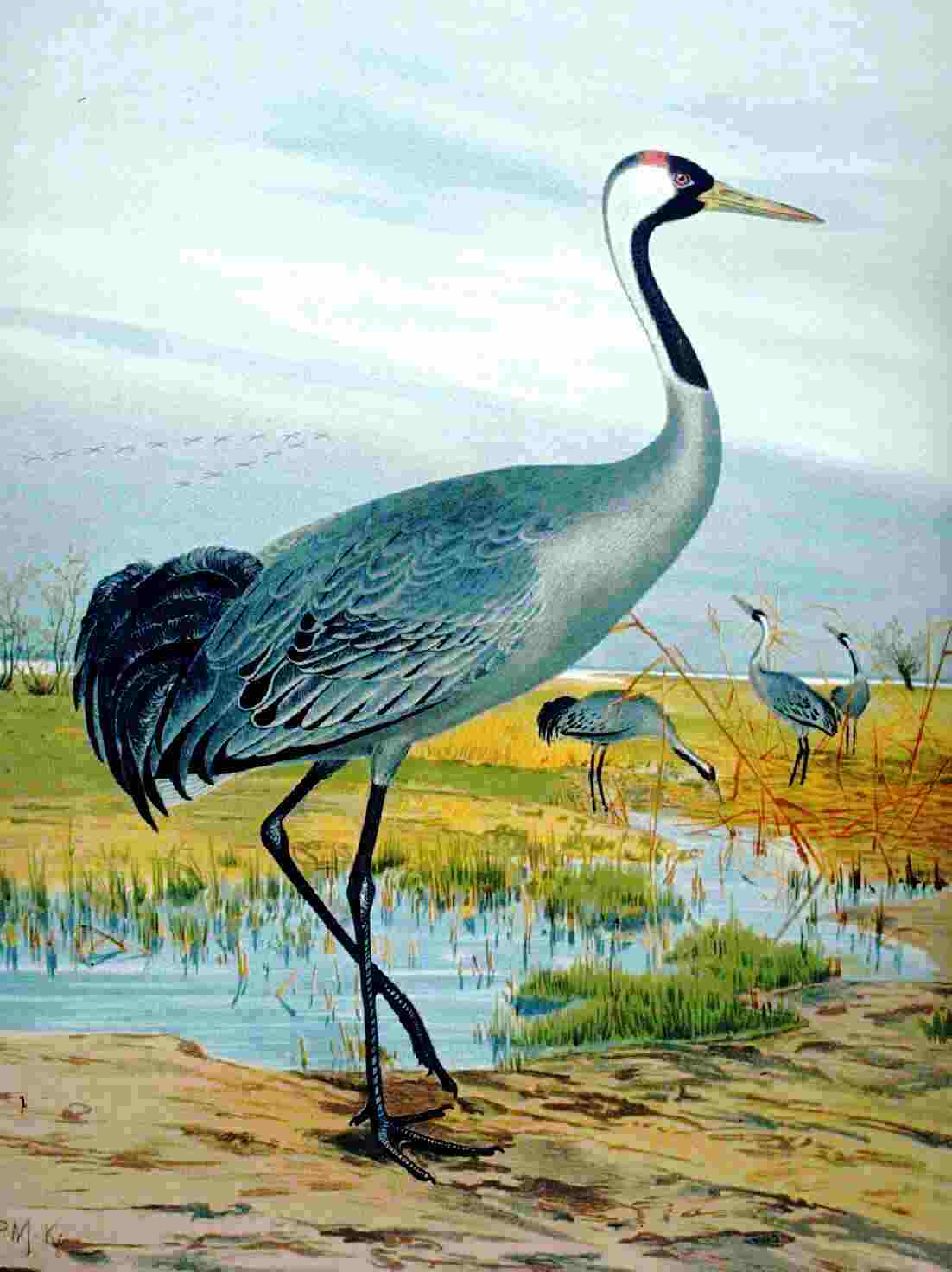 Description –
Grus grus is a large bird with a total height of up to 120 cm, a wingspan of 180-240 cm, for a weight of up to 7 kg.
It is recognized for having a prevalent gray plumage color, with a black and white neck and a red spot on the head. The tail has a plume shape.
The eyes of the adults are red while in the juvenile phase the color is first brownish to become more and more red year by year.
It has very long, sturdy and massive legs, provided with very elongated fingers and provided with strong nails, legs suitable for walking on uneven and flooded ground, characteristic of the frequented environments.
The beak is massive, pointed and very robust that the crane uses forcefully like a real pickaxe to dig the soil in search of roots.
The juveniles have a much less showy livery and without the particularities of the adults. They have an ocher yellow coloring all over the body and lack the typical black chignon tail. Gradually in the first three years the young cranes change their appearance, resembling more and more the adults up to the typical gray livery. Cranes are subjected every two years to a drastic moult of primary flight feathers which make them unable to fly for a few weeks. In this period, which precedes the migratory movement, these birds gather in even numerous groups, in inaccessible places where they can hide and escape from terrestrial predators.

Biology –
The common crane, outside of the reproductive period, moves almost exclusively in flocks composed of dozens, sometimes hundreds of individuals and, always “in herd”, rests on the humid areas, to rest or refresh.
The reproduction phase of this bird begins from the month of March and until the end of May; single individuals begin to return to their nesting areas, located as far north as the Eurasian continent. The tundra and the vast swampy areas within the taiga are its favorite nesting areas.
The couples, having reached the nesting territories, disperse looking for isolated places where to place the nest while the young and non-breeding adults remain united in small groups continuing an assiduous social life.
The nest is placed on land just emerging from the water level and built by bringing dry grasses, sedge and twigs to form a platform that guarantees isolation from the water. Sometimes the same nest is also used in the following years thus showing a strong attachment to the native territory.
Couples are stable for many years and partner changes rarely occur. However, the couple’s bond is always maintained through the famous courtship parades that are performed throughout the year, even outside the wedding period. Jumps with open wings, bows and runs, pirouettes and swaying of the neck, all accompanied by the usual hoarse, terrible and habitual cackle emitted by both partners.
Two eggs are normally laid (occasionally 3 or 4), of a cream color with large brown spots and the hatching is almost exclusively carried out by the female alone, with the male always lurking around in defense of the nest.
The hatching lasts about 30 days and the chicks remain unable to fly for at least ten weeks even if the nest is immediately abandoned a few hours after birth. After just one day, the chicks are able to follow their parents in the search for food, hiding on the ground as needed, aided by their strongly mimetic livery. During this period, adult cranes make that particular moult that makes them unsuitable for flight, remaining with the little ones hidden in the surrounding environment.
Their natural enemies are seagulls and crows and large birds of prey (Eagles, Buzzards and Harriers), as well as mustelids and foxes. All animals and birds are bravely faced directly, with very fierce and often victorious fights, only in the case of man are they limited to simple shouts and cries of alarm.
Families migrate together and spend the first winter in African neighborhoods joining the large migratory flocks. The maturity is reached after the 3 years but also beyond and the species can live more than 30 years. For this reason and for the good number of specimens present in the different populations, the species is not considered, at the moment, at risk.

Ecological Role –
The common crane is a migratory bird that has a summer range in the northern parts of the Eurasian continent and some winter ranges further south in the warmer areas.
Also in Italy there are wintering cranes, in particular around Pisa and in Sicily, while the winter sightings of cranes (both wintering and passing) are currently around 1500 per year, growing and distributed in all regions.
In recent years flocks have also been sighted in Italy which, according to some estimates, would have been composed of over 1000 individuals.
This bird feeds on insects, small fish, but also cereals and vegetables. The diet of the Crane is quite varied, and differs considerably between that typical of the breeding sites – swamps and marshes – and that chosen in the resting or wintering areas, where the species goes, to feed, up to the cultivated fields.
Among the conservation measures it is recalled that it is listed in Annex I of the Birds Directive (79/409 / EEC). It is also a species subject to protection according to Article 2 of Law 157/92.