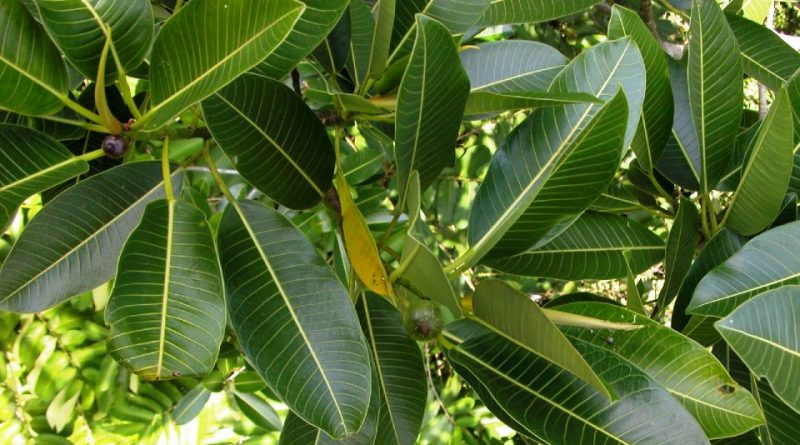 Etymology –
The term Ficus is the classical Latin name of the fig, a genus already known then, probably derived from Hebrew.
The specific insipid epithet comes from the Latin insipĭdus, a derivation of sapĭdus ‘tasty’, with the prefix in.

Geographic Distribution and Habitat –
Ficus insipida is a tropical tree present in an area extending from Mexico to South America. It is present, in particular, in South America, Peru and Brazil, north through Ecuador and Central America up to Mexico.
Its habitat is that of the Amazon rainforest and evergreen deciduous forests or open fields or slopes, often along roadsides, often near homes, usually at low altitudes, but ranging from sea level to altitudes of about 1,550 meters. above sea level. 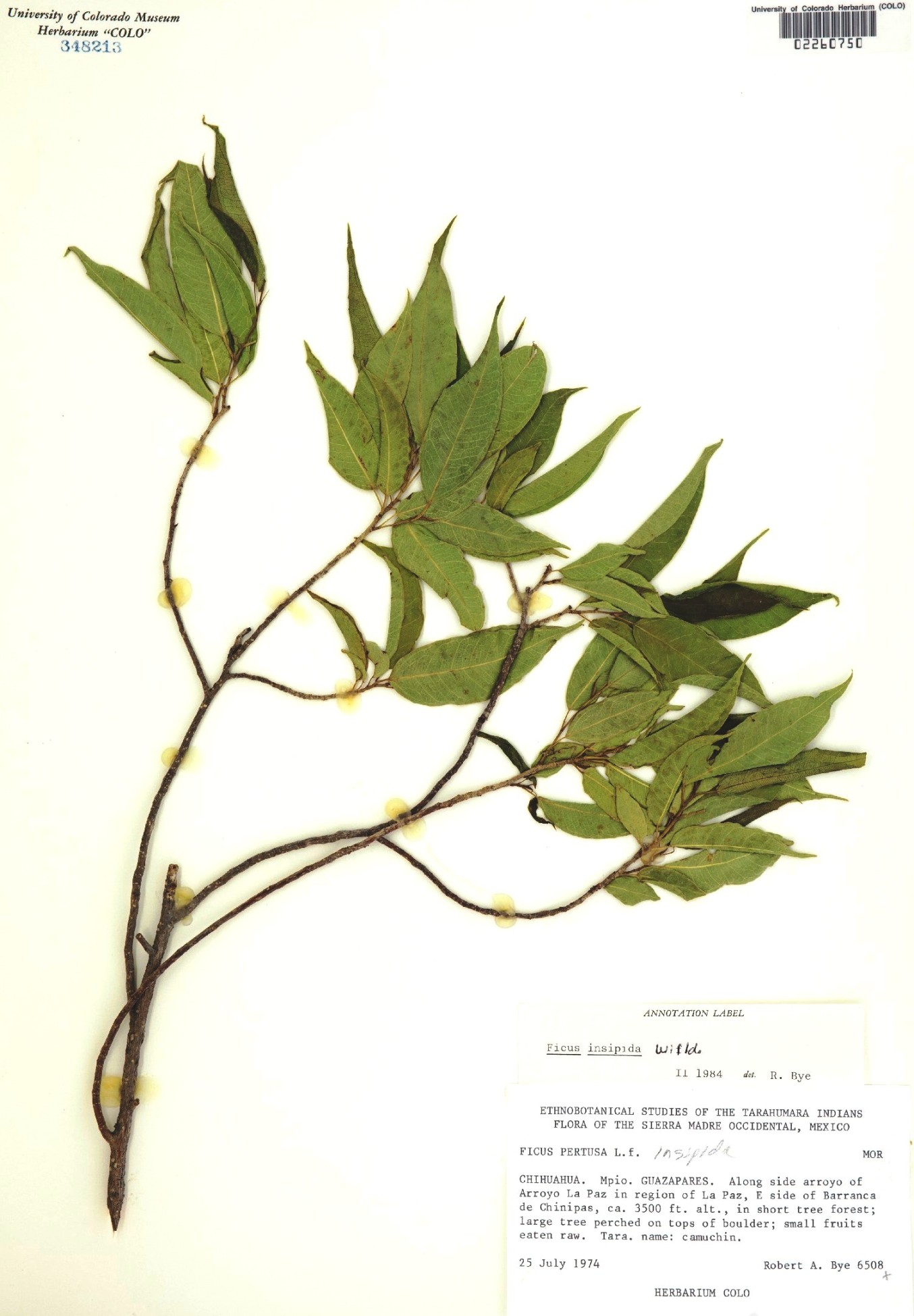 Description –
Ficus insipida is an evergreen tree that grows from 12 to 40 meters in height with open and widespread foliage.
It is a plant that, even if it is a tree when it is mature, begins its growth as a climbing plant that clings to a mature tree, ending up strangling it. Its favorite hosts are Guarea tuisana and Sapium pachystachys, and it is also often found on already dead trees.
The tree often has shallow roots and supportive square roots ranging from 8 to 40m in height.
The leaves vary in shape from narrow to elliptical; from 5 to 25 cm in length and from 2 to 11 cm in width.
The plant blooms from February to April and bears warty yellow-green fruits 4-6 cm in diameter.
Trees produce three types of flowers; male, a long-styled female, and a short-styled female flower, often called the gall flower. All three types of flower are contained within the structure that we usually think of as the fruit.
Although they are as edible as most figs, as the scientific name (literally “tasteless fig”) suggests, they have an insignificant taste. They have dimensions with a diameter of between 15 and 40 mm or even more.
The monkeys feed on the fruit still on the tree and the fallen fruit is eaten by the peccaries.

Cultivation –
Ficus insipida is a plant that prefers a sunny and fairly fast-growing position.
These trees have a unique form of fertilization; each species relies on a single highly specialized wasp species that is itself totally dependent on that fig species to reproduce.
The female fig wasp enters a fig tree and lays eggs on the short-styled female flowers while pollinating the short-styled female flowers. Wingless male fig wasps emerge first, inseminate emerging females, and then pierce the exit tunnels from the fig tree for winged females. The females emerge, collect the pollen of the male flowers and fly away in search of the figs whose female flowers are receptive. To support a population of its pollinator, individuals of a Ficus spp. it must flourish asynchronously. A population must exceed a critical minimum size to ensure that at any time of the year at least some plants have the emission and reception overlap of fig wasps. Without this temporal overlap, the pollinating wasps would become locally extinct.
Propagation can occur by seed which is good to sow as soon as it is mature in a shady location in a nursery seedbed. A low germination rate can be expected, with the seed germinating within 20 – 60 days.
When the seedlings are 3-4 cm tall, they can be transplanted into single containers. The seedlings are ready for transplant after 8 – 9 months.

Customs and Traditions –
Ficus insipida is valuable to people probably for its latex, which is used as an anthelmintic and has sometimes been exported.
The plant is sometimes grown in home gardens to supply this latex.
Its edible fruit is sometimes harvested in the wild for local use, while it is also used for crafts.
Wood is soft, but it is used for construction purposes where durability is not important.
It is a plant used by the wajacas (shamans) of the Krahô tribe in Brazil as a memory enhancer. Its latex is also used in South American folk medicine as an anthelmintic, called ojé, but because it is toxic it must be used with caution.
The Maya codices are folding books deriving from the pre-Columbian Maya civilization, written in Mayan hieroglyphic characters on a cloth of Mesoamerican bark, amatl, obtained from the inner bark of some trees, the main one being the wild fig or amate (Ficus glabrata; a synonym of F tasteless).
The inner bark is used by the Moré of Bolivia to produce a fibrous fabric used for clothing.
Among the edible uses we remember that of the fruits, which are very soft and juicy when ripe. They have a mediocre flavor and are more commonly eaten by birds and other mammals than by humans.
Latex flowing from the trunk and branches is used commercially in meat tenderizers, edible collagen films, cold-resistant beer, and as a clotting agent for cheese making.
Among the medicinal uses, it should be remembered that latex is an effective anthelmintic, although it can be drastic and even corrosive.
It is recommended in the treatment of ankylostomiasis and jaundice. It is also said to be aphrodisiac, a remedy for anemia and to aid memory.
Toxicity is low and no contraindications to normal therapeutic doses are reported except individual hypersensitivity inducing prolonged contact allergy.
The leaves contain psoralens and various triterpenes. Ficin is also present (sulfhydryl protease with 3 main components and 248 amino acid residues).
Among other uses, young and hard fruits are used to make designs on hats and probably other items. If a cross section of the fruit is pressed against the surface, a blackish circular figure of more or less permanence is left on it.
The heartwood is light brown in color, with dark gingival streaks and extensive light gray or dark areas probably due to spots; sapwood is creamy yellow or almost white. The texture is medium to coarse; the grain is straight to intertwined; the gloss is medium; there is no distinctive smell or taste. The wood is light to moderately heavy; soft; of low natural duration. It matures quickly, with the risk of twisting. It is easy to work with, even if it is woolly; planing, stamping and turning are good to excellent; requires a moderately smooth finish. It is used for doors and panels, light boxes, moldings, furniture etc.

Preparation Method –
Ficus insipida has a wide range of uses and preparations.
Among the edible ones, it should be remembered that the fruits have a mediocre taste and are more commonly eaten by birds and other mammals than by humans.
Latex is used commercially to tenderize meat or for edible collagen films, cold-resistant beer, and as a clotting agent for cheese making.
Latex is used for various medicinal uses.