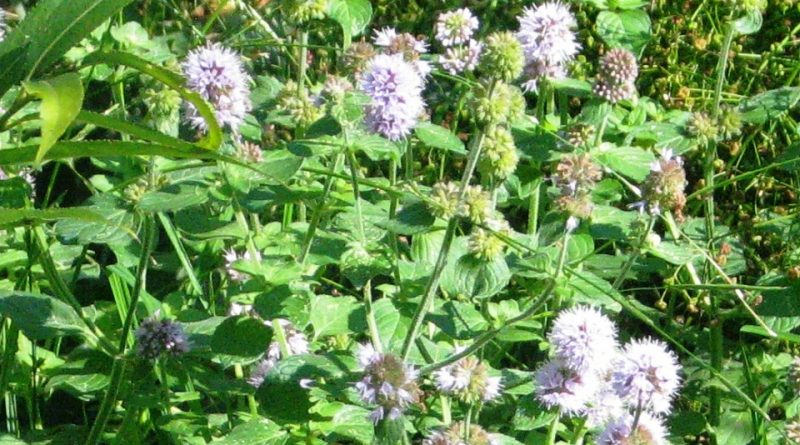 The water mint (Mentha aquatica L., 1753) is a perennial herbaceous species of the Lamiaceae family.

Etymology –
The term Mentha comes from the Greek μίνθᾰ mínthă mint
The specific aquatic epithet derives from aqua water: for the growth environment, in or near water.

Geographic Distribution and Habitat –
Water Mint is a plant native to much of Europe, northern Africa and western Asia. It has been introduced in North and South America, Australia and some islands in the Atlantic.
In Europe it is common everywhere (a little less in Russia). In the Mediterranean area it is found in Anatolia, Transcaucasia, Mediterranean Asia and North Africa (excluding Egypt).
In Italy it is a common plant throughout the territory including the Alps. On the other European reliefs connected to the Alps it is found in the Black Forest, Vosges, Jura Massif, Central Massif, Pyrenees, Balkan Mountains and Carpathians.
As the name suggests, water mint finds its habitat in the shallow margins and channels of streams, rivers, ponds, dams, ditches, canals, wet meadows, swamps and swamps. If the plant grows in the water itself, it rises above the surface of the water. Generally grows on mineral or peaty soils that are slightly acidic to calcareous (it is common on soft limestone).
The altitudinal distribution sees it grow up to 1200 m s.l.m .; therefore it frequents the following vegetation planes: hilly, mountainous and partly the subalpine one (in addition to the plain one – at sea level). 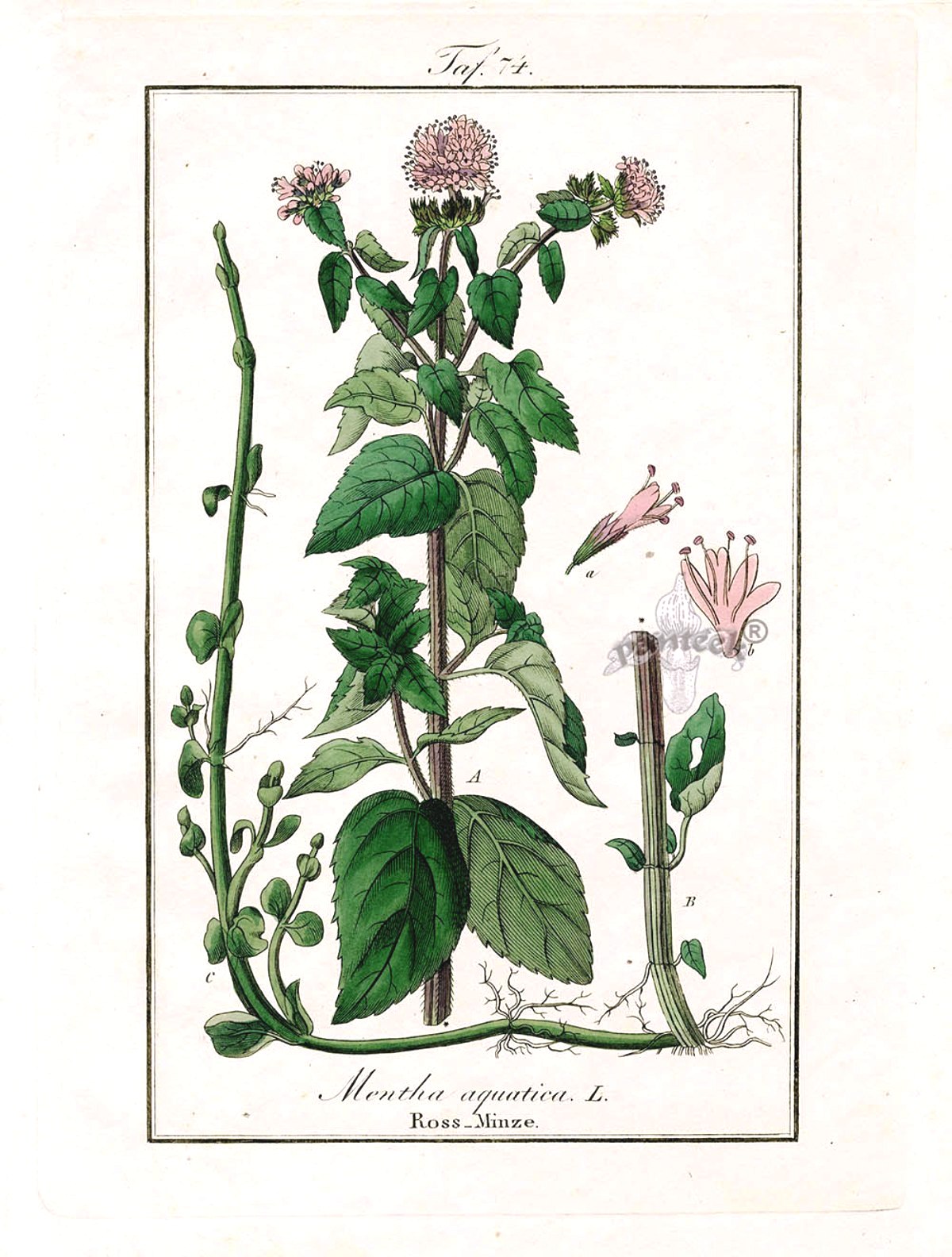 Description –
Mentha aquatica is a perennial herbaceous plant of 15-30 (50) cm, perfumed, with woody rhizome that emits creeping epigeal stolons
The stem is ascending, with a diameter of about 5 mm and a quadrangular section, and is sprinkled with hairs above all, branched, reddish.
The leaves measure 1-4 x 2-6 (9) cm, are opposite two by two, decussate, with a short petiole (4-9 mm) visibly furrowed in the upper part, have an oblong oval surface with acute or oval apex – rounded with obtuse apex, the toothed margin, and the surface often curved downwards, it is glabrous above while it is tormenting on the lower side, where the secondary ribs parallel to each other are more evident.
The flowers are fragrant, hermaphroditic, pink or purple in color and collected in globose inflorescences similar to flower heads, at the apex of the stem and in verticillastri at the axil of the upper leaves, carried by peduncles of about 2.5 cm. Bracts similar to the leaves but of smaller dimensions that do not overhang the inflorescence. 3-4 mm bracts. Calyx of 3-4 mm, cylindrical, tubular with 5 equal teeth, acute triangular, reddish green, hairy. Tubular corolla of pink or purple color, hairy inside, with 4 lobes of which the upper one is larger than the others and sometimes bilobed. The upper ovary is formed by 4 carpels with the stylus in the middle and 4 stamens with purple anthers that protrude for a long time from the corolla tube, surpassing it.
The antesis is between June and October, pollination is entomogamous and hydrocore dissemination.
The fruit is formed by 4 oval nuculae with 1-1.1 x 0.6-0.8 mm mericarps, subtrigons, slightly wrinkled at the apex, with a mealy insertion surface, brown in color.

Cultivation –
Water Mint is a herbaceous plant that, while loving full sun exposure, grows well even in partial shade. Withstands low winter temperatures and even frost.
It prefers damp and muddy soils and therefore it must be implanted directly in the silt of the bottom near the shore at the desired depth. The planting depth between the rhizome and the water surface must not be more than 10 cm.
If the plant is grown in the ground it should be watered often because it does not tolerate dry soil.
The plant reproduces by seed but is always propagated by agamic or vegetative way through cutting of stolons or division of the tufts. The seeds, even if produced in abundance, are rarely fertile or because the plants are hybrid, and therefore from their seeds we will hardly be able to obtain plants identical to the one that produced them.
Division by tufts is possible; in this case, in the autumn period, the lateral stolons emitted by the mother plant are taken and implanted at the same time in the desired area. Or, again in autumn, the most vigorous tufts are extracted from the ground and divided into several portions, with well-developed roots. Also in this case, they are immediately planted always at the same depth. The new plants thus obtained will have the same characteristics as the original ones.

Customs and Traditions –
Mentha aquatica is a plant known and used since ancient times. A Greek legend tells that Proserpina, queen of Hades, surprised her husband Pluto in loving talks with a young girl named Menthes with whom the god of the underworld had fallen madly in love. Enraged by anger, Proserpina transformed the beautiful young woman into a plant, the Mint, to take revenge, which since then has been a symbol of the cold of fear and the ardor of love.
Mint is still considered by many to be a powerful remedy to fight evil spirits and still the modern “Magicians” burn it for consecrated talismans intended to protect against countless diseases and to ward off negative influences.
Mentha aquatica is a plant which, thanks to its active ingredients such as essential oil (composed of menthol, cineole, mentofuran and terpenes), resins, tannins and bitter principles, is an antispasmodic, carminative, diaphoretic, refrigerant, vasodilator, antiseptic plant, astringent, cholagogue, stimulant, stomachic, pain reliever, emetic, tonic.
It is also used as a corrective to the flavor of some drugs and sprinkling powders.
In herbal use, it is used for internal use as an infusion (herbal tea) or tincture (alcoholic or vinous) to promote digestion and block intestinal fermentation, stimulate biliary secretions, eliminate nausea and quell vomiting, hiccups and spasms in general. But beware the drinkable preparations if used for a long time and in excessive quantities can give rise to hypnotic phenomena and gastric intolerance.
For external use as an infusion for itching, inflammation of the airways and skin and for bad breath with rinses, gargles or inhalations. To relieve rheumatic or neuralgic pain in tincture by rubbing the painful parts.
It is also used for cosmetic use; the tonic-astringent and refreshing properties of this plant have led the cosmetic industries to use it in the preparation of toothpastes and mouthwashes, decongestant creams, skin-purifying lotions, soaps and foam baths, and refreshing and decongestant distilled waters.
As for food use, fresh leaves and flowers are used in the preparation of mixed salads, sauces and marinades for meats and fish, gardener of legumes and beans, to flavor fruit salads, jellies, jams, pastries, soft drinks, syrups , juices, grappas, liqueurs, bitters, and the preparation of candies and chewing gums.

Preparation Method –
In addition to medicinal, pharmaceutical and cosmetic uses, this plant is used in the kitchen. The edible parts are the leaves, raw or cooked, with which you can make tea, or they can be used as a condiment / spices.