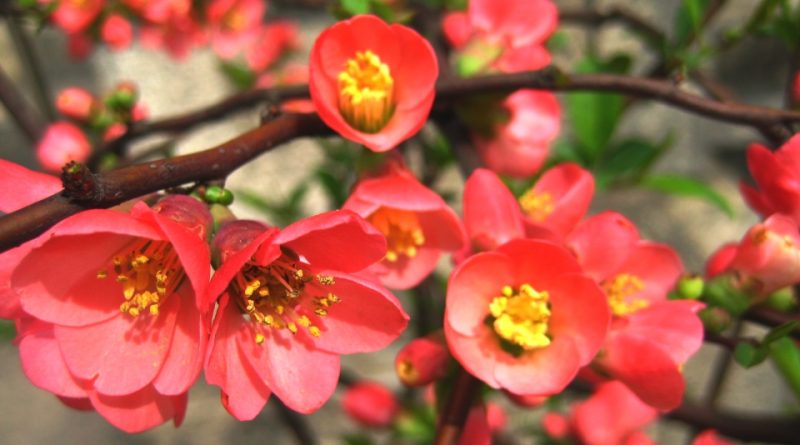 Etymology –
The term Chaenomeles comes from the Greek καίνω chaino open, wide open and from μῆλέα meléa melo: due to the ancient belief that its fruit divides itself into 5 sectors when ripe.
The specific speciosa epithet comes from spécies beauty: good-looking, showy, elegant.

Geographic Distribution and Habitat –
Flowering quince is a plant found in East Asia and native to China and Japan where it grows in the woods. 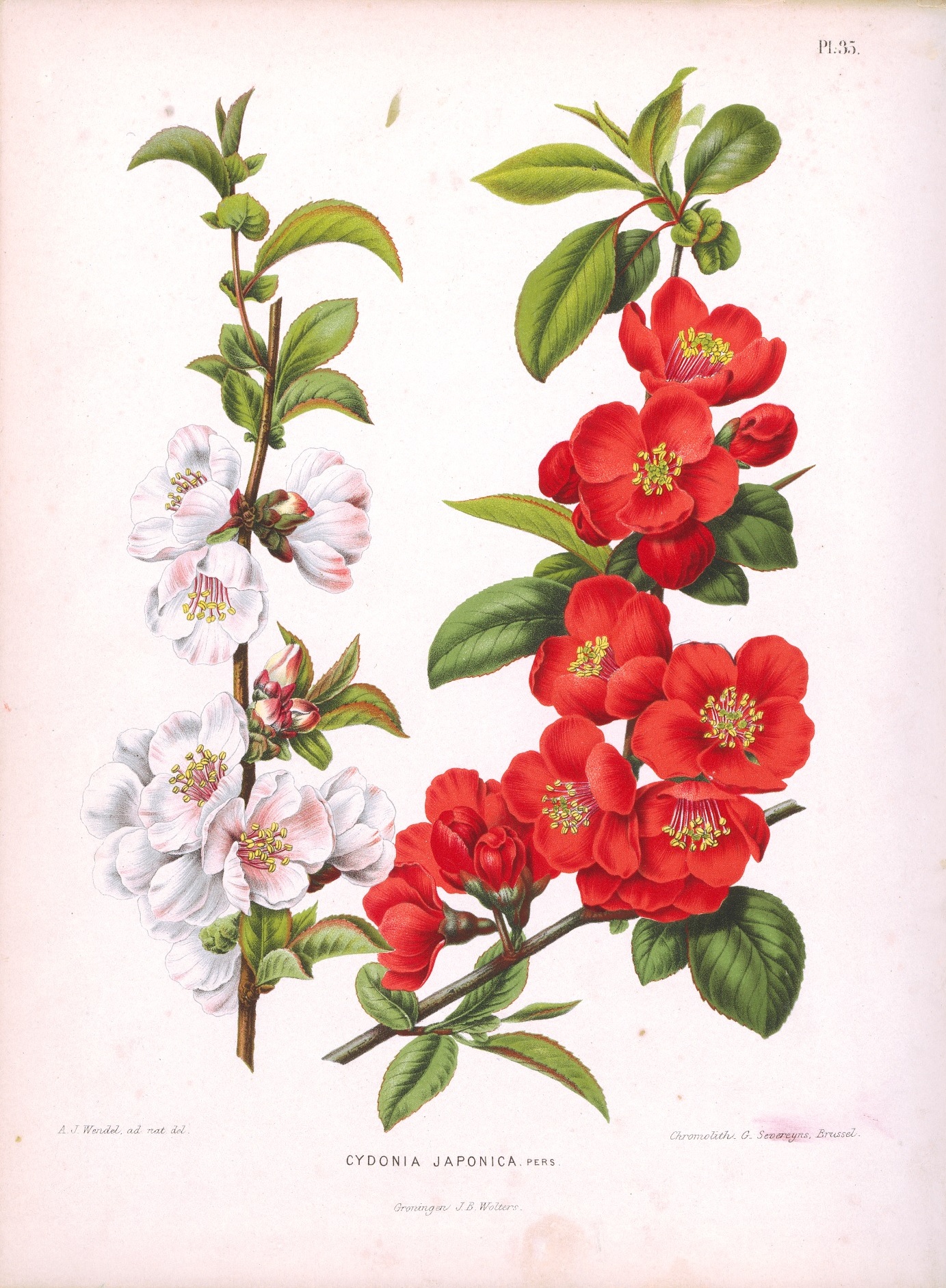 Description –
Chaenomeles speciosa is a deciduous or semi-evergreen shrub species, usually growing to about 2m.
It constitutes dense tufts of slightly thorny branches, with a smooth green-brown bark; the leaves begin to grow during flowering and are brownish when sprouted, they turn bright green as they grow.
Between the end of winter and the beginning of spring, the peach blossom produces a profusion of red-orange but also white flowers, which continue to bloom for a couple of months.
In autumn it produces small yellow or red apples, with a bitter taste, used for jams and preserves.
The fruit is a hard and fragrant pommel, golden-yellow or yellowish-green, ovoid or globose, with a diameter of 4-6 cm, no fruiting pedicel. Seeds obovoid, with obtuse apex and sharp base, 6-7 x 3,3-4 mm, glabrous, shiny, dark red or blackish.

Cultivation –
This plant is widely cultivated in temperate regions for its fickle bearing and showy flowers that appear early in the season, occasionally even in mid-winter. It is often used as a low cover. Numerous cultivars have been selected with flowers in shades of white, pink and red.
The Chaenomeles speciosa grows without problems both in the sun and in the shade, but certainly the most luxuriant blooms are obtained by placing the plants in full sun, so that the first warm rays of February guarantee the plant the necessary warmth for the frost you don’t spoil the buds. Surely this shrub is very rustic, so it does not fear the winter cold or the summer heat in any way. The only problem could be represented by late spring frosts that could compromise flowering, hitting the buds that have just sprouted, compromising their health.

Customs and Traditions –
Chaenomeles speciosa is known in the context of traditional Chinese medicine as Zhou pi Mugua.
The plant was discovered by the scholar Thunberg in the eighteenth century who classified it with the name of Pyrus Japonica, confusing it with another variety. Another expert in botany was the British Sir. Joseph Banks, who recognized the uniqueness of the fruits, renaming it “Chaenomeles Speciosa”.
A peculiarity of this plant is that from the end of spring it produces small fruits similar to quince apples of yellow-gold color and with a markedly sour taste, which can be eaten only after cooking.
Traditionally they are used in Asian countries, in compotes, jams or in addition to preserves of other fruits.
It is said that Sir. Banks, who arrived in the Asian continent during a voyage with Captain Cook, was delighted by a jam with a unique flavor, which was given to him by a local girl. Intrigued, he strove to bring a specimen of the plant that produced its fruits with him to England. A talented naturalist, he studied the peculiarities of the shrub, up to reclassify it, as mentioned, with the name of Chaenomeles “Speciosa” Rubra, in honor of the girl who, in addition to introducing him to a new variety, had stolen his heart.

Preparation Method –
The fruits of Chaenomeles speciosa are used, above all, in Asian countries, for the creation of compotes, jams or to add them to preserves of other fruits.