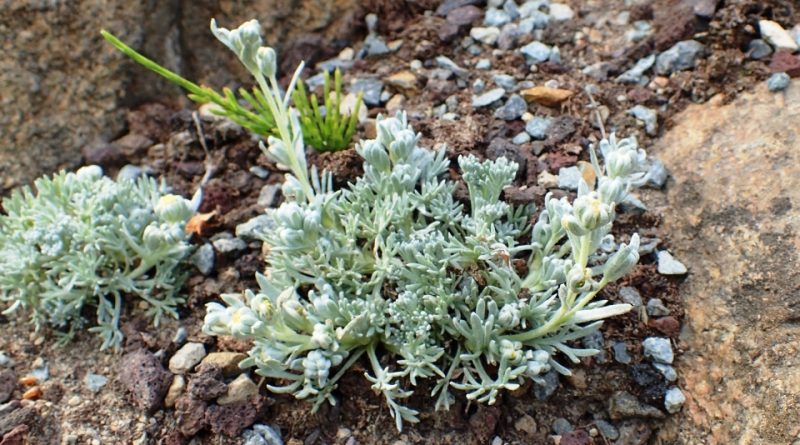 Etymology –
The term Artemisia comes from Ἄρτεμις Artemis Artemide, Greek name of the goddess Diana, a genus already mentioned in Pliny; according to some authors, Artemisia II of Caria (Αρτεμισία Artemisía? -350 BC), sister and wife of Mausolus, would have given this plant its name.
The specific epithet umbelliformis comes from umbella umbrella, parasol and shape appearance: arranged as an umbrella.

Geographical Distribution and Habitat –
White genepì is a species of the mountains of southern Europe present, with two subspecies, along the entire Alpine arc and the northern and central Apennines. The regional distribution is restricted to a small portion of the northern Carnic Alps near the border with Austria.
Its habitat is that of cliffs and gravelly slopes, on siliceous substrates, in the Alpine belt, up to 3135 m. 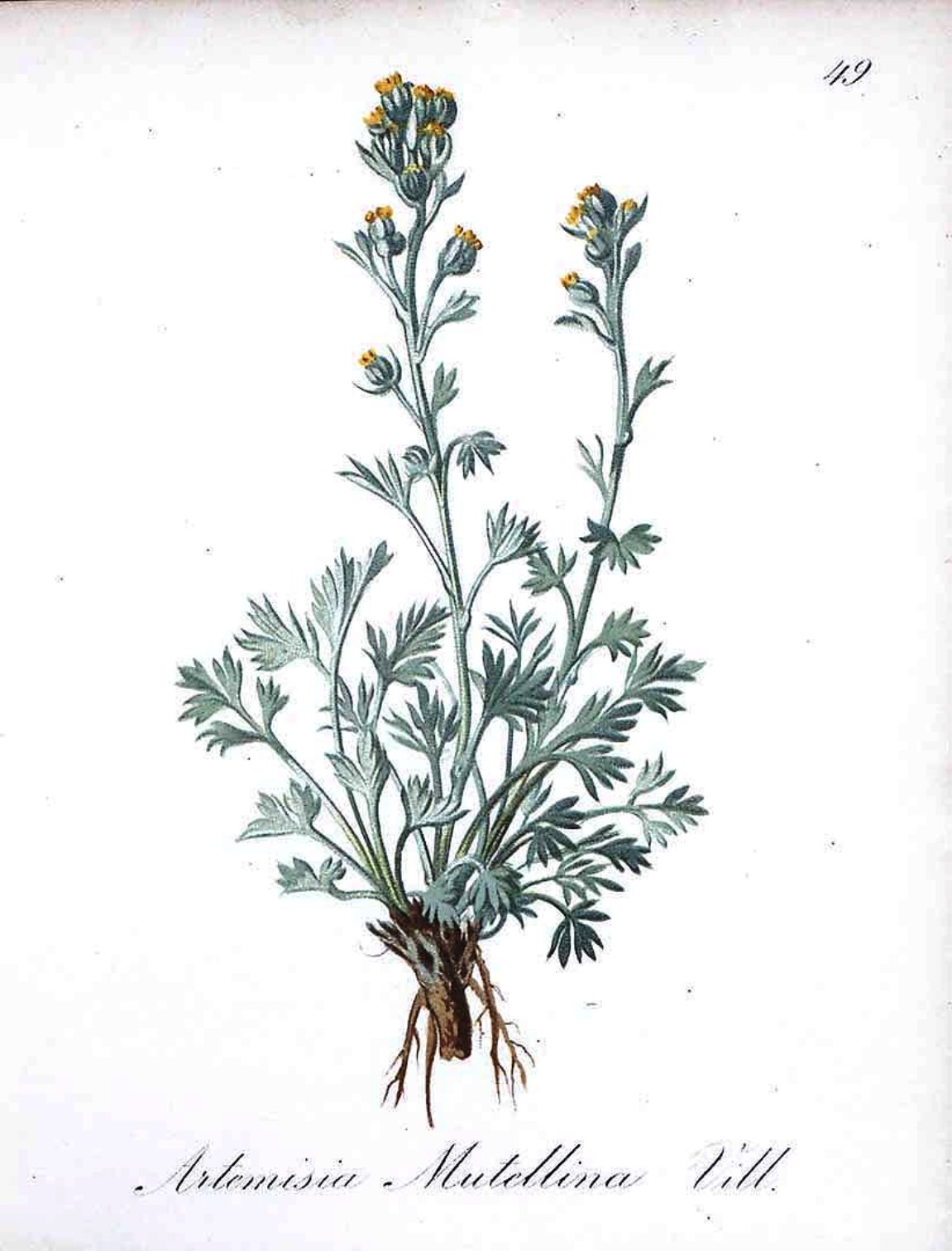 Description –
Artemisia umbelliformis is a perennial herbaceous plant that can grow up to 6 – 12 cm (maximum 20 cm) in height.
The biological form is fruticose camefite (Ch frut), that is, plant characterized by a woody base, with wintering buds, placed at a height from the ground between 2 and 30 cm with a shrubby appearance.
The herbaceous portions dry out annually and only the woody parts remain alive. It is a pubescent species with “T” hair and has a pleasant aromatic odor. It is also latex-free (like the other Asteraceae) but contains sesquiterpene lactone ethereal oils.
The roots are secondary from taproot.
The leaves, mostly basal and with a petiole, are tomentose. The lower leaves have a 2 – 3 – pinnate shape; in general the main axis is divided into 5 parts; the upper ones are simpler and progressively reduced towards the inflorescence (the lacinias of the last leaves are toothed). The petiole at the base is devoid of orecchiette and the size of the lacinias of the basal leaves: width 1 mm; length 6 – 9 mm. the stalk length of the Cauline leaves is 5 – 9 mm.
The flowers are actinomorphic, tetra-cyclic (i.e. formed by 4 verticils: calyx – corolla – androceo – gynaeceum) and pentamers (calyx and corolla formed by 5 elements) with golden-yellow petals; the flowers are gathered in terminal inflorescences, composed of small pedunculated flower heads (the upper ones are sessile) slightly pendulous and spaced from each other (loose inflorescence at 10 – 15 flowers). The flower heads are inserted on each side and at the apex of the inflorescence are collected in dense glomeruli. In the flower heads the peduncle holds a globular envelope made up of several scales arranged in an imbricated manner that protect the woolly receptacle on which two types of flowers are inserted: the external ligulate flowers (absent in this species), and the central tubular flowers. The scales are briefly hairy with brown margin (they are not blackened). The size of the flower heads is less than 6 mm. Pedicle length: 2 – 8 mm.
The fruits are achenes without pappus, with a compressed shape on the sides.

Cultivation –
The White genepì is a spontaneous plant that grows on cliffs and gravelly slopes, on siliceous substrates, in the Alpine belt, which also reproduces by pollination favored above all by the wind (anemophilic pollination).
Seeds are dispersed by gravity.

Uses and Traditions –
White genepì, together with A. genipi, is the most sought after species for its perfume and for the high concentration of active ingredients with digestive, diuretic, antiseptic and febrifugal properties, as well as for the preparation of liqueurs, and is therefore often subject to indiscriminate collections that justify its protection; like the other congeners, this one also contains the toxic thujone.
This species in Italy can easily hybridize with Artemisia genipi Weber, Artemisia glacialis L., Artemisia nitida Bertol. and Artemisia lanata Willd ..
Other interspecific hybrids are:
– Artemisia × albertii Petitmengin (1906) – Hybrid with: Artemisia absinthium;
– Artemisia × pampaninii Vaccari (1904) – Hybrid with: Artemisia nana;
– Artemisia × perrieri Petitmengin (1906) – Hybrid with: Artemisia campestris;
– Artemisia × seileri F.O. Wolf (1892) – Hybrid with: Artemisia glacialis;
– Artemisia × sylviana F.O. Wolf (1892) – Hybrid with: Artemisia genipi.
This species is very similar to Artemisia genipi Weber, although this prefers siliceous substrates but they can easily be found in the same habitats as the narrow snow belt. Artemisia genipi is distinguished by basal leaves whose main axis is divided into 3 parts (and not 5), while the segments of the cauline leaves are not toothed; in addition, the scales of the envelope are bordered in black. These two species are also separated by a two-week delayed antesis of the white Genepì.
Also the species Artemisia nitida Bertol. morphologically it approaches the species of this voice; however, it stands out in that the inflorescence is composed of many more flower heads arranged on different lateral racemes.
White genepì is a balsamic and aromatic plant, to which various therapeutic properties are attributed but, being very rare, however, the collection of spontaneous entities is not recommended.

Preparation method –
White genepì is highly sought after for the production of the Genepì liqueur, in addition the leaves are used in the preparation of a tea and are sometimes also used as a condiment.