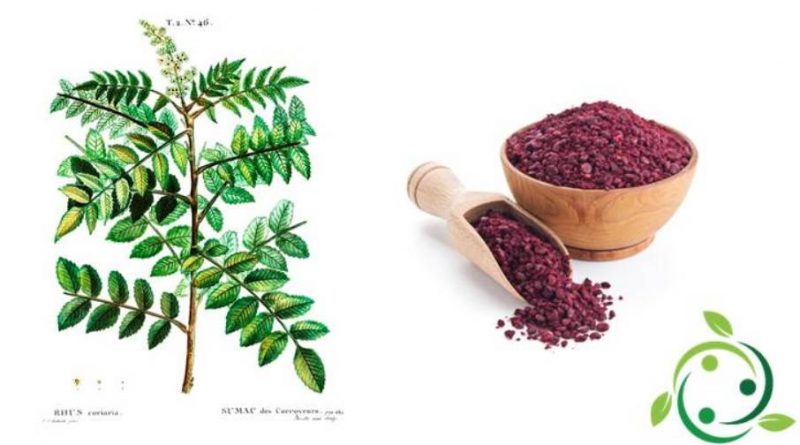 The sumac is a spice obtained from the Sicilian sumac plant (Rhus coriaria L.) and also used for other purposes.

Origins and History –
Sumac is a small shrub of the cashew family, originally from southern Europe, still cultivated today or spontaneously in Sicily and the Middle East.
As a spice it has a sour taste with sour which recalls the vinegar and fruity reminiscent of lemon, obtained by grinding the berries of the plant after placing them in brine and subsequently dried.
The sumac was already known to the Egyptians and Greeks who used it as a stain for dyeing fabrics.
Its scientific name denounces the use that was made, even in pre-war times, of its bark and leaves as a tannic substance in vegetable tanning, a technique in which it achieved the best results in the production of the renowned Moroccan and Cordovan leathers, which it gave a range of beautiful shades from green to blue.
Known since ancient times, so much that Dioscorides recognized its astringent and anti-inflammatory effects and recommended its resin as an analgesic for local use in caries and the dye to make hair black.
Mesue recommends its use in food with boiled francolin and, even better, in the fries with which it would even more perform its constricting action on the intestine.
It was used in the kitchen since Roman times using ripe drupes (as they are green they are toxic), dried and grated on food or infused in water, which gave the preparations a pleasant acidulous taste, more bland and delicate than lemon, but the the spread and the fortune of sumac in gastronomy are due to the medieval Arab cuisine which made extensive use of it.
The name sumacco derives from the Arabic summāq which in turn is at the origin of summāqia, a very complex dish that derives from Islamic haute cuisine, like other preparations such as lemonia – based on lemon – and rumania – with pomegranate – passes to the “international” gastronomy of the time, keeping the Arabic name. Even today Lebanese and Syrians use sumac to flavor fish; Iraqis and Turks add it to salads; Iranians and Georgians season kebabs: it is ideal with lentils, stuffed for chicken, onions and yogurt sauces.
With thyme and sesame it forms the mixture called zahtar used in North Africa, Turkey and Jordan as a condiment for meat. In the same area, a sumac herbal tea is still considered an effective remedy for gastrointestinal disorders.

Description –
Sicilian sumac is a deciduous shrub, which can reach heights of up to 3 meters. It has pinnate leaves, 10-20 centimeters long, with serrated edge. The flowers are greenish-yellow in color and gathered in panicles.
It blooms in May-August.
The fruits from which the spice is made are brown-red drupes and are poisonous when eaten fresh.
As a spice it has a sour taste, with sour which recalls vinegar and fruity that recalls lemon; it is obtained by grinding the drupes after placing them in brine and subsequently dried.

Active principles –
Sumac is a spice characterized by good antioxidant properties.
The sumac contains water, proteins, fibers, carbohydrates, ashes, fats and essential oil in which most of the substances with therapeutic properties are found. It is a good source of minerals and precisely contains: phosphorus, potassium, copper, iron, zinc, magnesium, calcium, sodium.
It also contains malic acid, oleic acid, linoleic acid and stearic acid. The sumac contains about 23% of tannin which, together with the coloring substances contained in it, is mainly used on an industrial level for dyeing fabrics as it has very good fixing properties.
In fact, the leaves contain gallotannins which mainly have anti-ischemic properties.
Finally, the plant contains a high percentage of antioxidants which, as is known, have an anti-aging activity against the cells of our body as well as beneficial effects on our health.

Properties and Uses –
The Sicilian sumac, as mentioned, is a spice with a sour taste, obtained from the homonymous plant, halfway between lemon juice and vinegar, particularly used in Middle Eastern cuisine to flavor fish; addition to salads; to season the kebab, with lentils, stuffed for chicken, onions and yogurt sauces.
For the preparation of the spice, the fruits are harvested between July and September when they have not yet reached maturity and are then dried. Once dried, the fruits are minced and the spice called sumac or sumac is obtained.
Thanks to the substances contained in the leaves, in the fruits and in the essential oil obtained from it, it has different virtues. It has first of all antibacterial, antifungal, febrifugal, diuretic, and anti-inflammatory properties.
The leaf extract has been shown to have beneficial effects on the cardiovascular system.
The fruit extract has instead shown to have hypoglycaemic properties.
The most important property of this spice is undoubtedly the antioxidant one. In fact, sumac is one of the foods with the highest antioxidant power in the world
In order to understand the value well, it is usual to compare the antioxidant power of sumac with that of apple. The latter is considered a good food with antioxidant properties.
This spice, from the point of view of antioxidant properties, is 73 times more powerful than apple.
The great abundance of antioxidants counteracts the harmful effects of free radicals. Thus there are benefits in terms of prevention against various pathologies, from tumors to cardiovascular diseases.
In Italy, sumac is not widely known, while in some eastern countries its use in the kitchen is particularly widespread. In Turkey, for example, the is used for the preparation of salads. In other countries, however, it is used to flavor legume-based dishes such as beans and lentils.
Another use of sumac is that of acidifier, in practice it is used for the seasoning of some dishes in place of lemon and vinegar. In Lebanon and Syria sumac is used to flavor meat and fish.
In North Africa, on the other hand, together with thyme and sesame, it is used to prepare a mixture of spices called zahtar.
The spice reached its maximum price in the 1920s but since then its value on the market has undergone an inexorable decrease. To date, its cultivation is passive from an economic point of view. In Italy it is still quite widespread often as a relic of ancient crops, especially in the provinces of Palermo and Trapani in Sicily. Elsewhere, sumac is prevalent in southern Europe and the Middle East.
Since ancient times, sumac was used for the tanning of hides but was also used in nutrition for its therapeutic properties. We still remember that its berries, if consumed when not yet ripe, are toxic.

Preparations –
To obtain the spice from the sumac, the ripe drupes are placed in brine (water and salt) which are then dried and ground.
A juice is also obtained by immersing the shredded seeds in water for twenty minutes (about 1 dL of water every 35 grams of seeds), then drain and squeeze.
In Middle Eastern countries, an acidic drink is prepared which is administered for the treatment of mild stomach ailments.
Beyond the particular uses in various cuisines, especially Middle Eastern ones, the sumac is also excellent on red beans seasoned with a drizzle of extra virgin olive oil and a half handful of sumac.
It is very useful to give a pinch of low acidity to all dishes that require it.
At one time, the tannins used in the dyeing and in the tanning process of the hides were extracted from the bark and leaves of the plant.