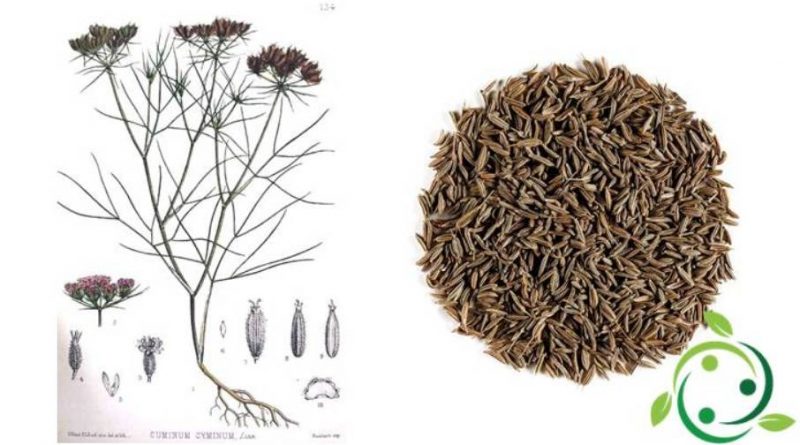 The cumin is a spice obtained from the homonymous plant (Cuminum cyminum L.) originating in the Mediterranean basin, and subsequently spread also to the American continent.

Origins and History –
Cumin is also known as Malta cumin and whose seeds, small and dark, are very similar to those of fennel from which they differ in shape, more subtle and elongated, in color, which tends to burnt earth and not yellow -verdognolo, and for the spicy aroma.
Cumin is then often confused with caraway, especially in Germanic-speaking countries, where caraway is known as Kümmel and also the German term used to indicate caraway is derived from that of caraway, to emphasize that German cooks consider cumin like the exotic variety of the well-known caraway.
Cumin is a plant cultivated since the time of the pharaohs, who adored its taste already in biblical times; in fact, even today the countries of greatest production are India, Iran, Indonesia, China and the southern Mediterranean.
The seeds, found on the Syrian site of Tell ed-Der, were traced back to the second millennium BC. Several findings have also been reported, relating to the age of the New Kingdom of Ancient Egypt.
Its name would connect it to the Persian city of Kerman, where cumin was produced in large quantities.
Originally grown in Iran and in the Mediterranean regions, cumin is mentioned in the Bible, both in the Old Testament (Isaiah 28:27) and in the New Testament (Matthew 23:23). He was also known in ancient Greece and ancient Rome. The Greeks kept cumin at the table, in its container (more or less as is used with pepper today), and this custom is still kept in Morocco today. The use of cumin became less and less frequent in Europe (with the exception of Spain and Malta) since the Middle Ages. It was introduced to the American continent by Spanish colonists.
During the Middle Ages, superstition wanted cumin to stop chickens, and lovers, from running away. It was also believed that the spouses who brought cumin seeds with them during the wedding ceremony would have a happy life. Cumin is also considered to help in the treatment of colds, if added to hot milk.
In Italian cuisine it represents a very rare and under-used spice, contrary to what happened at the time of Ancient Rome, while in the rest of Europe we find it in the dairy sector among the favorite spices for the flavoring of cheeses in Holland and in France. Instead, it represents an indispensable spice in Indian, Arab and South American cuisines, countries known for the generous use of legumes: lentils, chickpeas, beans and beans, whose use would not perform a simple aromatic function but an important function in the metabolization of this kind of foods.

Description –
Cumin is a plant with a thin, branched stem 20-30 cm tall, with leaves 5-10 cm long, arranged in a comb.
It has small, white or pink flowers arranged in an umbrella.
The fruit that forms is an ovoid-fusiform lateral achene, 4-5 mm long, containing a single seed.
The cumin seeds, which represent the spice, are similar to those of fennel and green anise, but are smaller and darker in color.

Active principles –
The cumin which has a bitter taste and a strong sweetish smell, boasts 375 calories per 100 gr. of product.
For the same quantity of product, the following are also present on average: Proteins 17.81 g, Carbohydrates 44.24 g, Sugars 2.25 g, Fats 22.27 g, Cholesterol 0 mg, Dietary fiber 10.5 g and Sodium 168 mg. and good quantities of iron and calcium.
It also contains: carvone, linoleic acid and vitamin C.
The particular scent and strong and warm aroma of cumin are due to its content of essential oils. Its main constituent, and important contributor to the aroma, is cuminaldehyde. Other important components of the aroma of toasted cumin are the replaced pyrazines: 2-ethoxy-3-isopropylpyrazine, 2-methoxy-3-sec-butylpyrazine and 2-methoxy-3-methylpyrazine.

Properties and Uses –
As mentioned, cumin is a plant used as a spice since ancient times and is still used in very different kitchens.
It is a particularly iron-rich spice that stimulates appetite and digestion.
Cumin has a characteristic bitter taste and a strong and sweetish smell thanks to the high content of oils. It is mainly associated with Indian cuisine, it can be present in curry and with other exotic cuisines (North African, Mexican) although its use is widespread in Spain, especially in the cuisine of the southeast of the Iberian peninsula and in German-speaking territories.
In Northern European cuisine, its seeds are used in breadcrumbs, legume soups, meat fillings such as meatballs and baked goods. In addition, it is also widespread in the preparation of liqueurs: the well-known German kummel liqueur is obtained from its distillation. In Eastern European cuisine, however, we find it mainly in the goulash recipe.
Cumin can be found in some Dutch cheeses, such as Leyden cheese, and some Valle d’Aosta (in the Aosta Valley the plant grows spontaneously) and in some types of French homemade bread. It is also commonly used in traditional Brazilian cuisine. In herbal medicine, cumin is classified as stimulant, carminative, and antimicrobial. Cumin is also an important component of chili powder, and is found in the mixtures of annatto, those for sautéed, garam masala, curry, and baharat.
It is also very popular in ethnic cuisine: in India, for example, it is used in the preparation of spice blends and is one of the main components of the curry mix. Cumin is also found in many Middle Eastern and North African dishes such as rice, lamb tajine, meat skewers, meatballs and soups. In Mexico it is used in the chili of meat and is a fundamental ingredient of the guacamole, while in Spain in the ragù, mixed with saffron.
In South Asia, cumin tea (seeds dried and boiled in water) is used to distinguish stomach bloating from gas from a real pregnancy.
In Sri Lanka, toasting the seeds and then boiling them in water produces a tea that is used to calm serious stomach problems.
In Arab and Latin American cuisine it is often combined with garlic and coriander leaves or seeds, also in the preparation of marinades such as Moroccan chermoula.
Crushed in a mortar, together with garlic, fresh coriander or parsley, sweet or spicy paprika, lemon juice turns into a delicious sauce in which the fish fillets are marinated before cooking in the oven or on the grill. Mixed together with other spices and garlic, it flavor the skewers of roasted meat from Uighur cuisine, in the Chinese province of Xinjiang, up to Middle Eastern shish kebabs and seek kababs from northern India. In Morocco, mutton is used to brush, together with butter to cook mechoui, in Egypt together with coriander it represents the most important spice for sesame sauces and falafel meatballs.
Cumin seeds are used as a spice due to their particular aroma, especially in North African, Middle Eastern cuisine, Xinjiang, Indian, Cuban and northern Mexican cuisine.
As regards the therapeutic aspects, cumin is considered an antifermentative potetene.
In addition, cumin seeds are a good source of iron, a component of hemoglobin, which transports oxygen from the lungs to all cells of the body, and is also part of the key enzyme for energy production and metabolism. In addition, iron is essential for keeping the immune system in efficiency. Iron is especially important for women in the menstrual period, as they lose iron every month during the cycle. Finally, children in the growing age, and adolescents, have an above average need for iron, as well as pregnant or breastfeeding women.
In general, cumin seeds are considered beneficial for the digestive system, and scientific research is beginning to rediscover the ancient reputation of cumin in this regard. Such research has shown that cumin can stimulate the secretion of pancreatic enzymes, which are necessary for proper digestion and assimilation of nutrients.
Cumin seeds may also have anti-carcinogenic properties. In one study, cumin showed to protect laboratory animals from the development of tumors of the stomach and liver. This protective effect could be due to the powerful cumin’s ability to purify from free radicals, as well as to the ability shown in the stimulation of enzymes that purify the liver.

Preparations –
Cumin, as mentioned, is highly aromatic, and in the kitchen its taste is accentuated by the frying and roasting of the seeds, which are often used whole and fried together with onion, oil or butter. In addition to pairing with legumes and cheeses, cumin is widely used in seafood dishes, to flavor grilled meats, especially those of blue fish.
It is still used in very different kitchens. It is, in fact, an ingredient of Indian curry powder, but it is also a spice typical of Middle Eastern and South American cuisine, where it was imported by Spanish colonizers. Cumin seeds are used in Holland to prepare a typical local cheese and are also widely used in Spain, Germany and France, for example for flavoring bread. In general, cumin in the kitchen can be used with whole or ground seeds to flavor vegetables and more elaborate dishes. Slightly toasted, caraway seeds can be sprinkled on the fruit salad.
Cumin can therefore be used to season many dishes, both in the ground form, and with whole seeds, since the natural sweet taste can also be extracted from them. While for sauces it can be added to give it an extra flavor, for authentic Mexican guacamole it is an essential ingredient. Cumin has also been used on meat, in addition to other condiments.