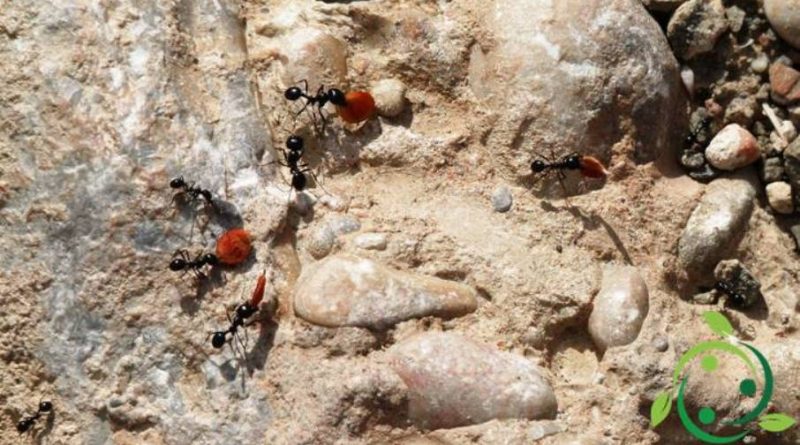 With the term myrmechory we mean the mechanism of transport and dispersion of the seeds, of some angiosperms, by the ants.
In fact, ants have considerable ability to transport, even for long stretches, seeds and fruits that they collect along their paths.
Therefore, a particular symbiosis is established between some species and ants whereby, in myrmecophilic species, the seeds are made palatable by the presence of particular appendages (heliosomes) containing nutrients.
The seed with the heliosome is called diaspora.
The seed dispersal mechanism is as follows. Worker ants transport the diaspora to the colony, where the heliosome is removed and used to feed the larvae; the seed is usually deposited in the underground chambers containing the waste materials or is expelled from the anthill.

Normally diasporas are not dispersed far from the mother plant. Plants, however, benefit from this mutualism with ants as this mechanism facilitates the transport of seeds to sites favorable for germination and is also protected by granivorous predators.
In nature, the myrmecoria mechanism is used by over 3,000 plant species. Typical examples of myrmecoria are observed in Chelidonium majus, in some species of plants of the genus Viola, in the snowdrop (Galanthus nivalis), in the Hepatica nobilis and in the Anemone nemorosa, in Onopordum illyricum, Mentha longifolia, Salvia aethiopis, Bixa orellana and many others other plants.