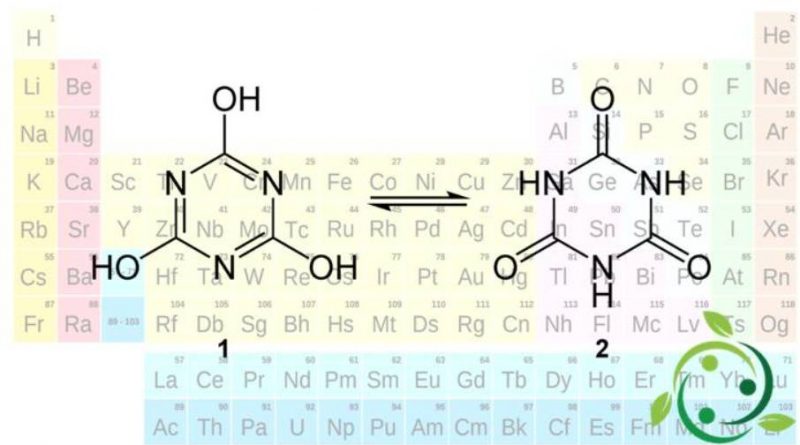 Cyanuric acid, whose term in the official IUPAC nomenclature is: 1,3,5-triazin-2,4,6-triol is an organic acid with brute or molecular formula: C3H3N3O3.
It appears as an odorless white solid, used as a precursor or component of whiteners, disinfectants and herbicides.
Chemically, cyanuric acid is the cyclic trimer of the elusive cyanic acid species, HOCN. The two structures easily interconvert as they are tautomers. The triol tautomer, which may have an aromatic character, predominates in solution. Hydroxyl groups assume phenolic character. Deprotonation with basic substances gives rise to a series of cyanurate salts.
Historically, cyanuric acid was first synthesized by Wöhler in 1829, by chemical decomposition of urea and uric acid.
Today cyanuric acid is synthesized on an industrial scale through the thermal decomposition of urea, with the release of ammonia. The conversion starts at about 175 ° C and proceeds according to the following reaction:

Another way to produce cyanuric acid is by hydrolysis of raw or waste melamine, followed by crystallization. Acid wastes from plants producing these materials contain cyanuric acid and occasionally dissolved amino-substituted triazines (i.e., ameline, amelide, and melamine). One of the methods provides that an ammonium sulphate solution is heated to boiling and treated with a stoichiometric equivalent of melamine, by means of which the cyanuric acid present precipitates as a melamine-cyanuric acid complex. Undissolved cyanuric acid can be present in industrial wastes resulting from the accidental combination of cyanuric acid-containing wastes with those containing amino-substituted triazines.
In addition to being a precursor or component of disinfectants, herbicides and whiteners, cyanuric acid is widely applied in the treatment processes of swimming pools and spas to slow down the decomposition of hypochlorous acid due to ultraviolet rays. If applied in the right doses, it allows you to save up to 80% of the normal consumption of chlorine in swimming pools during the months of greatest turnout. In addition, it is necessary to monitor its concentration because if present in too high doses it compromises the quality of the swimming pool water with the consequent development of algae.
According to the State-Regions agreement of 16/01/2003 the maximum permissible limit of cyanuric acid (in the form of isocyanuric acid) in the water entering the tank and in the tank water is 75 mg / L.