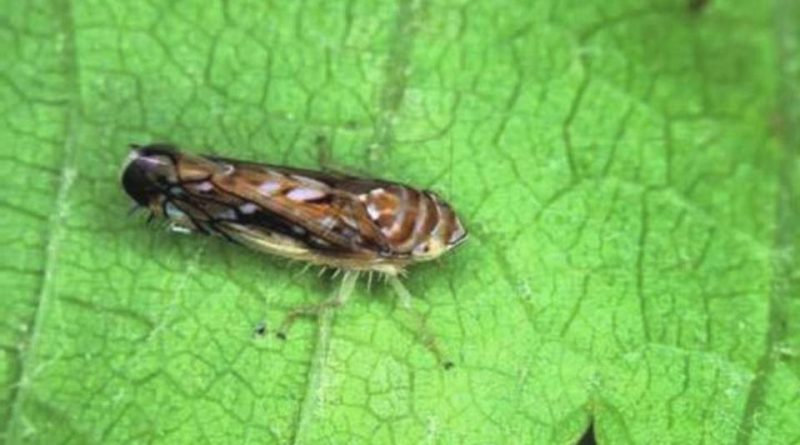 The American grapevine leafhopper (Scaphoideus titanus Ball) is a homoptera insect belonging to the Cicadellidae family.

Geographical Distribution and Habitat –
The American grapevine leafhopper is an insect originating in North America and accidentally introduced to Europe in the 1960s, probably through wintering eggs in the rhytidome of cuttings, although it was probably already present for some time, following massive imports, during the second half from 1800, of American rootstocks resistant to phylloxera.
In Italy it was first reported in 1963 in Liguria from where it then spread to the northern and central regions of Italy and subsequently to Switzerland, Slovenia, Croatia, Portugal, Spain, Serbia.
The buzzer performs its biological cycle exclusively on the vine, Vitis spp and is the vector of the golden flavescence of the vine.

Morphology –
The eggs of Scaphoideus titanus are recognized for their reniform shape, compressed laterally, transparent and about 1 mm long, initially pearly in color, tend to yellow the end of the embryonic development when the eyes of the embryo, red in color, become visible through the corium. This are located in the wood is very difficult to locate in the field.
This insect has 5 juvenile ages, similar in shape, divided into two stages of neanid without wing sketches and three of nymph with wing sketches present.
The first three ages have a cream-white color, while the nymphs of the fourth age have the characteristic brown areas on the abdomen.
The nymphs of V age are well recognizable thanks to the large ocher areas on the urotergites and the brownish color of the wing cases.
In all ages, the last uritis has two rhomboid black spots. This characteristic differentiates the juvenile forms of Scaphoideus titanus from those of similar species.
The adults measure 5–6 mm in length, with the females slightly larger than the males, and are of an ocher brown color.
The head is triangular froma and on this, both in adults and in youthful forms, there are 2–4 darker transversal bands on the forehead, and a transverse triangular spot located in a dorsal position between the compound eyes.
The legs are cream-colored, except for the metathoracic which have the distal part and the second dark tarsomer, and the first and second whitish tarsomer.
The metathoracic wings are brownish in color and have dark veins; on the front there are white areolas.
The female can be recognized in that she is equipped with a sturdy golden brown ovipositor which allows her to lay her eggs in the branches. This ovipositor, placed at the end of the abdomen, is preceded by a black ring on the pre – genital segment.

Aptitude and biological cycle –
The biological cycle of this insect begins with the laying of eggs which takes place from August to October in the rhytidome of the branches where, around the middle of May, the hatching of the eggs begins, which lasts for several weeks.
The development of the insect occurs through two neanid stages and three nymph stages.
The first age nymphs reach the maximum numerical density in mid-June and subsequently decrease in favor of the pre-imaginary forms of subsequent ages. The presence of youth forms continues for the entire month of July.
The first adults are in early July.
In this way the Scaphoideus titanus performs only one annual generation.