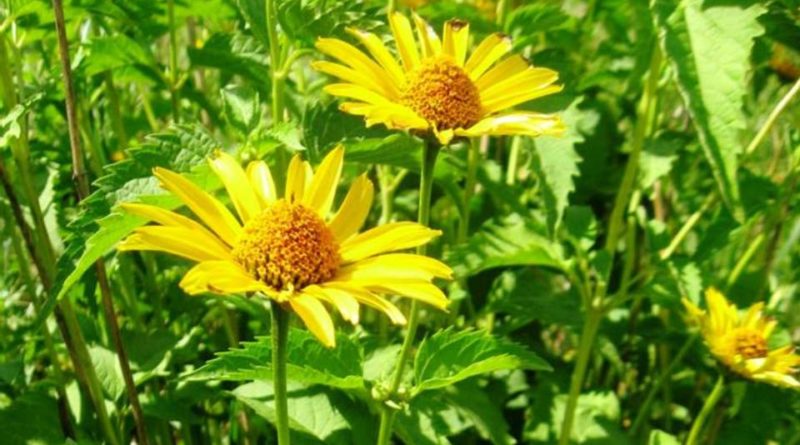 The Yellow crownbeard (Verbesina helianthoides Michx.) Is a herbaceous species of the Asteraceae family.

Systematic –
From a systematic point of view it belongs to the Eukaryota Domain, Kingdom Plantae, Magnoliophyta Division, Magnoliopsida Class, Subclass Asteridae, Order Asterales, Family Asteraceae and therefore to the Genus Verbesina and to the Species V. helianthoides.
The term Actinomeris helianthoides (Michx.) Nutt is synonymous.

Etymology –
The term Verbesina, according to some authors, is the diminutive of vérber verga, twig; according to others it would instead be a reference to the genus Verbena (which in turn perhaps comes from vérber verga, twig), motivated by the similarity of the leaves, a fact very little confirmed by the available images of the two genera.
The specific epithet helianthoides comes from the genus Helianthus (from the Greek ἥλιος hélios sole and from ἄνϑοϛ anthos fiore: flower of the sun and from the Greek εἷδος eídos appearance, similarity: similar to a Helianthus.

Geographical Distribution and Habitat –
Verbesina helianthoides is a plant native to the southern and central United States, where it is found mainly in Missouri, Texas and Georgia.
Its natural habitat is that of the sunny areas in correspondence with open woods, grasslands, clearings, along the railways, in preferably limestone soils. 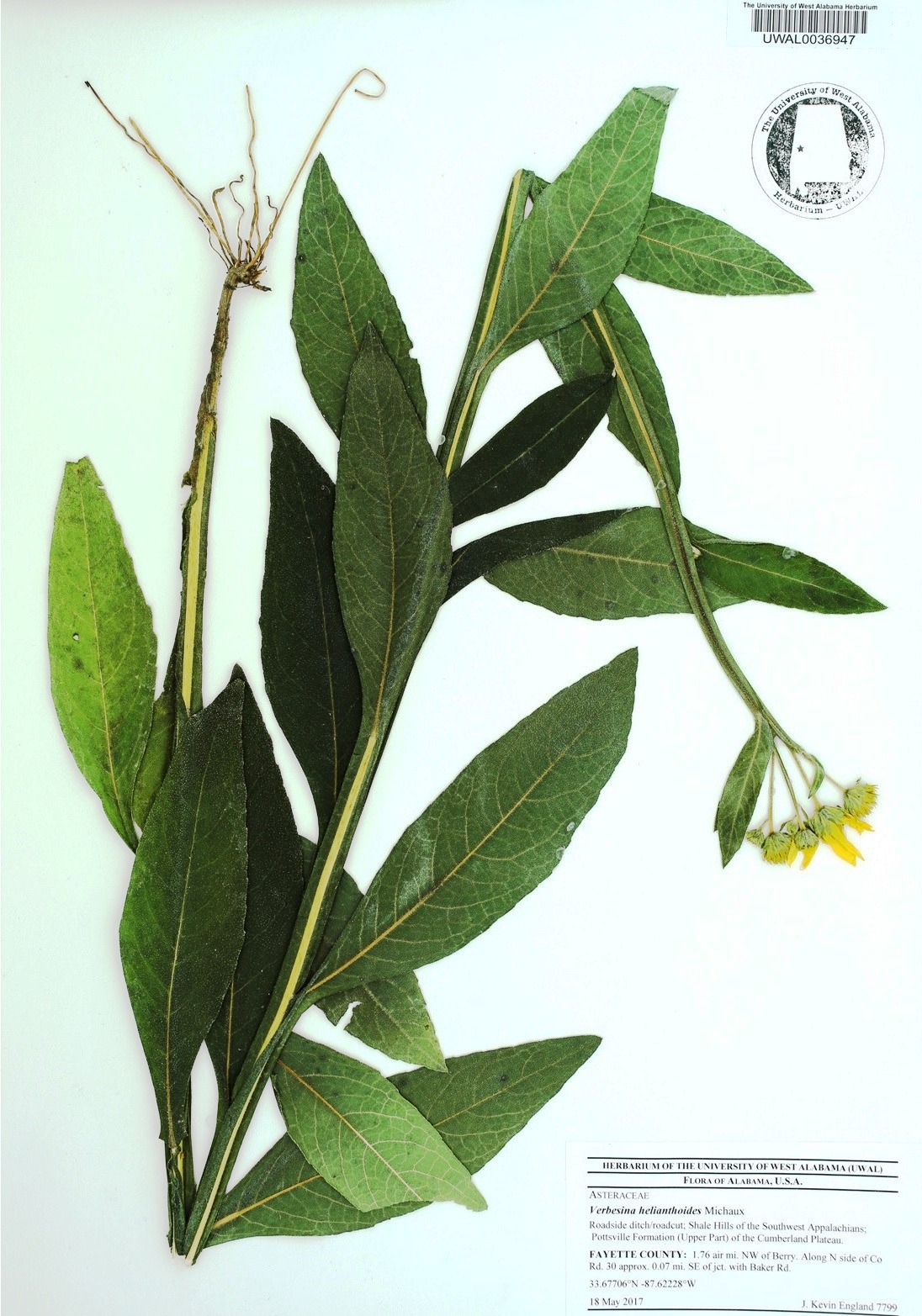 Description –
The Yellow crownbeard is a perennial herbaceous plant that grows in height between 0.80 and 1.30 m.
The root system has rhizomes from which different stems can depart.
The central stem is winged, not branched and with the sparse presence of small white hairs.
The leaves are alternate, lanceolate to ovate in shape, rather soft and covered with small white hairs, which gives the leaves a fuzzy light green appearance, especially on the underside.
The inflorescence is present at the apex of the plant, composed of numerous composite flowers, bright yellow, unscented, similar to daisies on rather short pedicels with abundant long white hairs.
The antesis is between May to October.

Cultivation –
For the cultivation of Verbesina helianthoides it is good to choose an area in full sun or even partial where it grows, preferably in calcareous soils, also of a clayey and stony nature, provided that they are well drained.
Propagation occurs easily by seed.
It has a good resistance to drought, managing to germinate after a period of lack of rain and recovering the vegetative state following significant rains.
It is a plant that is easy to grow and, moreover, quite resistant to diseases and pathogens.

Uses and Traditions –
The Yellow crownbeard is a plant with little interest as an ornamental plant or in wild gardens.
Moreover, plants can be difficult to find on the market except through companies specialized in native and rare plants.
The root of this plant contains an oil and a resin with the taste and smell of turpentine.
This plant, in past times, has been used by the populations of northern Georgia for the treatment of dropsy. It has been used in cases of acute dropsy and in many serious cases of chronic cystitis with an appreciable effect or even in stones and chronic inflammations of the entire urinary tract.
Verbesina helianthoides is a plant widely visited by bees, bumblebees and other pollinators. The caterpillars of the butterfly Chlosyne nycteis (Silvery Checkerspot) and the golden moth (Basilodes pepita) feed on the foliage of this plant.

Method of Preparation –
The Yellow crownbeard is a plant, as mentioned, which can be used for urological diseases, by administering it in the form of a tincture as a diuretic, or as an infusion, repeating the administration, according to the customs of the populations where it grows, every hour or two.