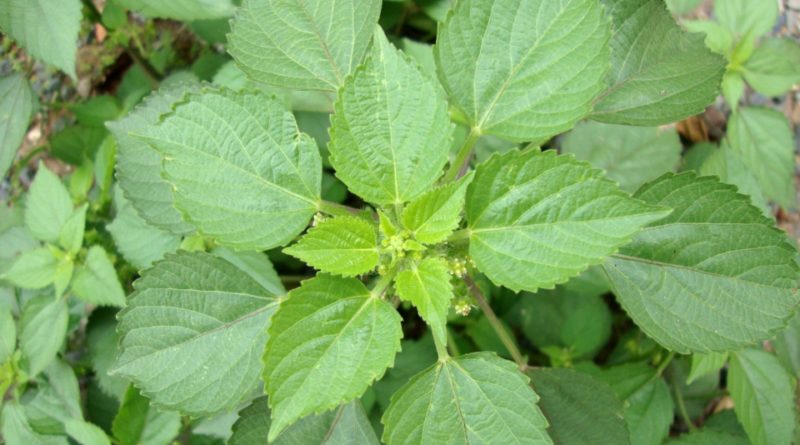 The Indian nettle or Indian Acalypha (Acalypha indica L.) is a herbaceous species belonging to the Euphorbiaceae family.

Etymology –
The term Acalypha comes from the Greek ἀκᾰλήφη acaléphe nettle (from the privative prefix α-, from καλóς calós beautiful, pleasant, and from ἀφή afé touch, contact: not pleasant to touch), name used by Hippocrates for the similarity with the genus Parietaria.
The specific indica epithet has been attributed for the true alleged Indian origin.

Geographical Distribution and Habitat –
Indian nettle is a plant present, with wide distribution, in all the tropics of Africa, as in Nigeria, and in the islands of the Indian Ocean.
It is also present in India, Southeast Asia, Yemen and Oceania.
This plant grows in man-made places, in abandoned lands, road edges, crevices of walls, in rocky slopes, edges of forests and river banks, where it prefers wet and shady places, growing from sea level up to 1350 m of altitude. 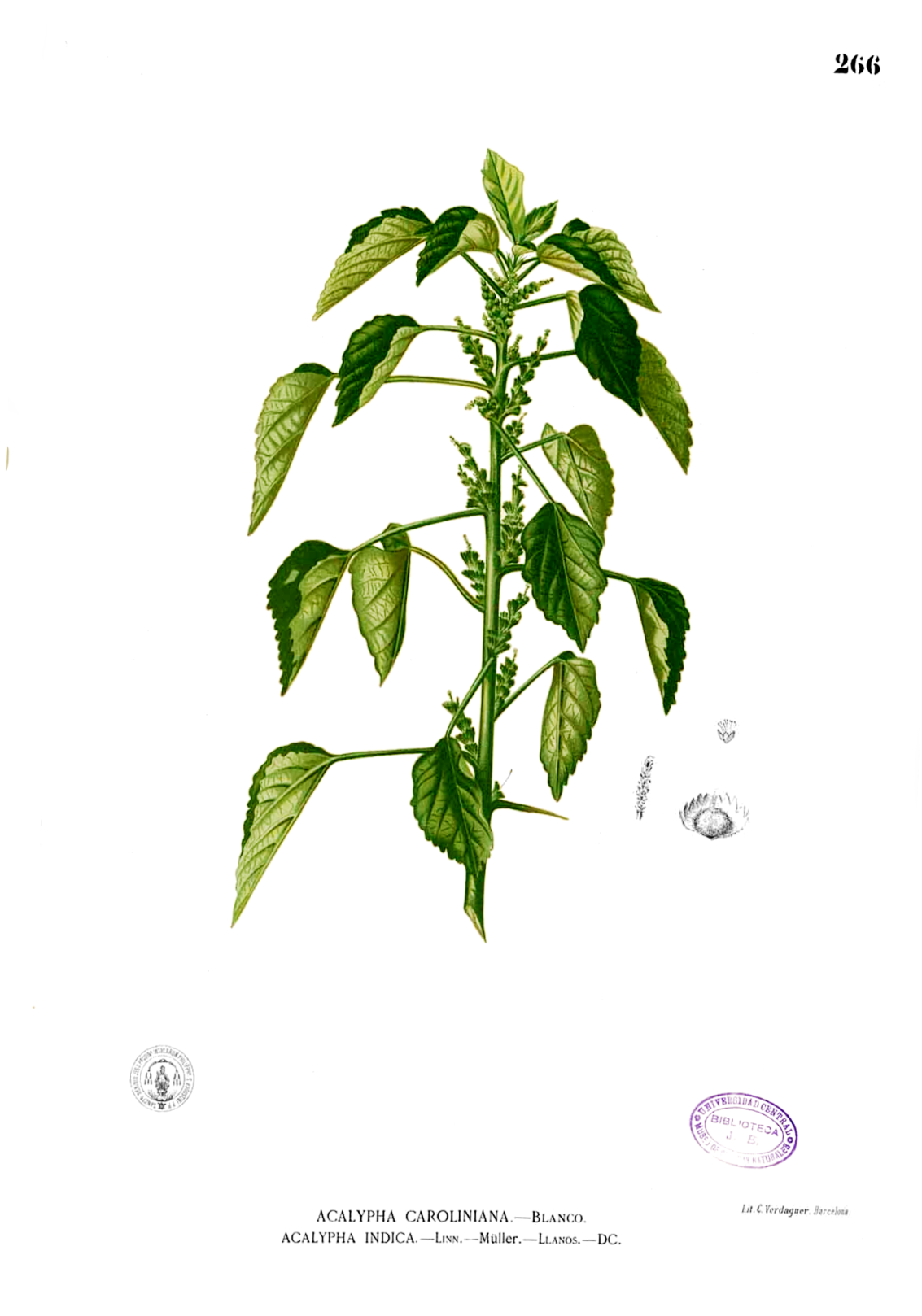 Description –
The erect herb is an annual herbaceous plant that can be recognized for the cup-shaped envelope that surrounds the small flowers of the inflorescence and which, under favorable conditions, can grow up to 1.2 m, but usually it remains smaller.
The leaves are ovate broad in the dimensions of 1.2 cm – 6.5 cm × 1 cm – 4 cm, with the rounded base to soften briefly. The leaf margin has 5 ribs and is crenate-serrated with acute or obtuse apex, with the 1,5-5,5 cm long petiole.
The female flowers, green in color, located at the bottom, in an axillary position, 2,5–6 cm long, monoecious, with a rachis ending in a triradiate cap.
The male flowers are tiny, white-green in color, located in the upper part and grouped together and have worm-shaped anthers.
The pollen is rounded with a diameter of about 10-12 microns.

Cultivation –
The Acalypha indica is a spontaneous plant that grows mainly in the tropical belt that goes from Africa to Oceania and that takes advantage of the areas on the banks of the fumes or lakes and in any case in damp and shady places where it managed to vegetate up to a altitude of about 1350 m asl.
However, it can be propagated by seed and does not need special care except to always find sufficient water and humidity availability.

Uses and Traditions –
Indian nettle is a plant that, in the places where it grows, has many traditional medicinal uses.
In Madagascar, the crushed plant is used against skin parasites. In Mauritius, the sap of the crushed leaves or the decoction of the plant, mixed with salt, is used for scabies and other skin diseases. In the Seychelles, a root infusion or decoction is administered for asthma and also to cleanse the liver and kidneys. The root decoction is also taken to combat intestinal worms and stomach pain. Leaf sap is also taken as an emetic.
An infusion of leaves is also taken as purgative and deworming in Madagascar. In East Africa, the sap of the leaves is used for eye infections and other treatments.
Acalypha indica is a plant listed in the pharmacopoeia of India as an expectorant and for the treatment of asthma and pneumonia. Previously it was already listed in the British Pharmacopoeia.
This plant is therefore also very popular in traditional Tamil Siddha medicine as it is believed to rejuvenate the body. The plant was also consumed as a vegetable in Africa and India, but it contains several alkaloids and hydrogen cyanide.
Ingestion of Acalypha indica can lead to hemolysis in people suffering from glucose-6-phosphate dehydrogenase deficiency.
From the analysis of the shoots on 100 g we have: water 80 g, energy 269 kJ (64 kcal), proteins 6.7 g, fats 1.4 g, carbohydrates 6 g, fibers 2.3 g, Ca 667 mg, P 99 mg, Fe 17 mg and ascorbic acid 147 mg.
The plant also contains a cyanogenic glycoside called acalyphin (a derivative of 3-cyanopyridone) and flavonoids. Tannins, β-sitosterol, acalfamide, aurantiamide, succinimide and flindersin (a pyranoquinolinone alkaloid) have also been isolated.
Indian Nettle is also known for the attraction that its roots have on domestic cats that are particularly attracted to them.
The chemicals that attract cats are the isidohydronepetalactone and isoiridomirmecin iridoid compounds.

Preparation method –
With parts of Acalypha indica, decoctions and preparations are prepared, used in countries where the plant grows, in traditional medicine.
The plant is also used for food purposes, such as vegetables, but due to the presence of some compounds and alkaloids, their use is not recommended.