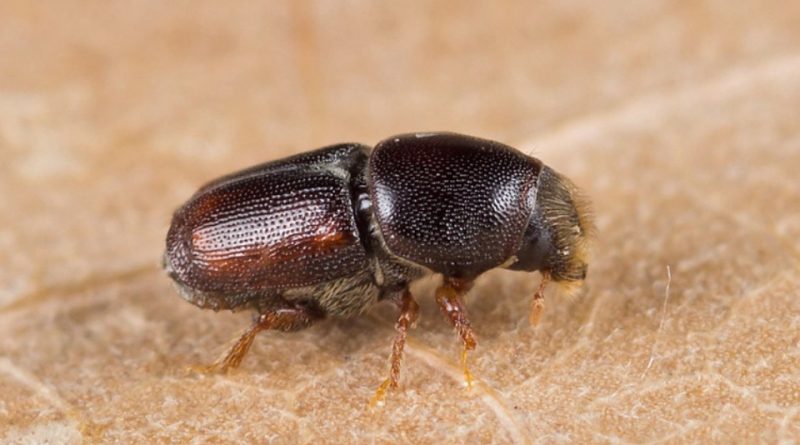 The elm bark beetle (Scolytus multistriatus Marsham.) Is a small insect from the Curculionidae family.

Geographical Distribution and Habitat –
Scolytus multistriatus is a small beetle present in Europe, up to some areas of Norway, in the United States, and with some presence but minorities in Asia, especially the Middle East, North Africa, Australia and Chile. This insect lives at the expense of some plants among which above all the Olmo and other forest hardwoods and of landscape interest.

Morphology –
The adults of Scolytus multistriatus are brownish in color; they have dimensions between 2 and 3 mm.
They present the thorax with a shiny black pronotum with very minute punctuation, brownish reddish elytra with very fine streaks and points. Abdomen which differentiated, at the level of the posterior middle part of the second uroster, a horizontal conical protuberance turned backwards.
The larvae are cirtosomatic and secondarily apode, creamy white with brown head. At maturity they reach 3.5 – 4 mm in length.
Their presence can be identified through the excavated galleries that can be traced back to the following types:
– entrance hole with relative nutritional gallery: this is generally placed on the armpit of a side branch;
– gallery or bridal chamber: in this gallery the couplings take place, sometimes already started in the nutrition gallery. This is generally a larger and central cavity, in which more females can coexist, and from which branch side radial galleries depart;
– maternal tunnels: these are tunnels dug individually by the females for oviposition;
– larval galleries: they originate from the maternal galleries and are dug, in a centrifugal way, by the developing larvae; initially they are small, then bigger and full of rosure. At maturity the larva grows in a cell and the adults flutter by piercing the bark.

Attitude and biological cycle –
Scolytus multistriatus is a small lignicolous beetle that lives mainly on Olmo; it digs sub-cortical galleries, between wood and bark, which form characteristic radial patterns.
This bark beetle prefers to colonize perishable and / or dying plants due to the plant’s lesser ability to react and the lower lymphatic flow that could hinder the trophic activity of xylophagous larvae.
The insect winters at the larval stage inside the galleries, dug between the bark and the wood, in the host plants.
In the period between April and May, there is the first flicker of the adults; at this point they start their activity by entering the plants and digging the nutrition galleries, according to the scheme described. From these there is a second flicker at the beginning of summer, these adults will originate the larvae, which are active in late summer and which will have to winter.

Ecological Role –
The Scolytus multistriatus, as mentioned, lives at the expense of plants such as Elm and other forest broadleaf trees and of landscape interest, where the period of greatest harmfulness is from May to mid-October. This insect in the search for the host plant uses vanillin and syringaldehyde as signals to find a tree during oviposition.
The damage is caused by the production of the tunnels that obstruct the lymphatic flow, also considerably weakening the plants.
Furthermore, this insect can transmit some serious diseases such as Grafiosis, caused by a parasitic fungus of the elm which is Ophiostoma ulmi or Ceratocystis ulmi and can indirectly favor the establishment of lignicolous fungi (Caries).
In the fight against this Scolitide it is necessary to intervene with typically agronomic techniques which consist above all in eliminating the infested plants.
The agronomic struggle also consists in a good cultivation technique in order to keep the plants in good vegetative and sanitary condition; only in this way it is possible to think of obtaining results against the Scolitidi and avoiding heavy infestations.
The chemical fight is not feasible either because they are secondary pests, or because of the impossibility of reaching the different stages within the tunnels between bark and wood; in fact the rind does not absorb the insecticidal solutions. Furthermore, the periods of intervention would negatively affect the biocenosis of other useful insects and other organisms.
In any case, however, the treatments carried out on the foliage, at the time of the flicker of the adults, are not very effective due to the great scaling (almost two months) of the flicker themselves.
Chemical treatments, which in any case risk not having particular results, must therefore be carried out only in cases of extreme necessity and under the supervision of competent agronomists or foresters.