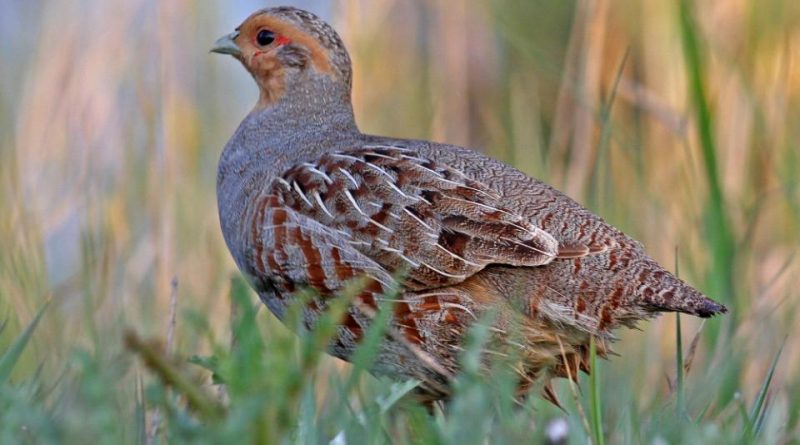 The Grey Partridge, also known as the Hungarian partridge (Perdix perdix, (Linnaeus 1758) is a bird belonging to the Phasianidae family.

Systematics –
From the systematic point of view it belongs to the Eukaryota Domain, Animalia Kingdom, Phylum Chordata, Aves Class, Galliformes Order, Phasianidae Family, Sottofamiglia Perdicinae and therefore to the Genus Perdix and to the P. perdix Species.

Geographical Distribution and Habitat –
Grey Partridge attends very diversified habitats, which include both hills and plains. It is a bird that usually frequents the cultivated expanses, of the agricultural zones used in traditional way, of the uncultivated herbaceous vegetation and rich of bushes.
In general, this bird concentrates in altimetric areas between 600 and 800 meters but can move at lower altitudes when the density of the pairs becomes excessive, or when the first cold arrives. In Italy, Starna is widespread almost exclusively in the hilly areas. In other countries, it also occupies cultivated plains where, however, it needs adequate scrub areas, bushes or woods in which to shelter in case of danger. Overall, the environments frequented by the species are united by the abundant presence of cereal crops, the scarce tree cover and a maximum altitude of 600 meters.
Perdix perdix is ​​a bird native to cold steppes, normally central Italy and the Balkans are the southernmost area where it lives. In fact, studies conducted on central European plants show that an average temperature of more than 22 ° C during the summer period increases the mortality of the chicks up to 80%. The most conspicuous partridge populations are found in the north and along the central northern Apennines.
Gray partridge is a polytypic species. Its distribution is mainly Eurasian although in the early twentieth century it was introduced in Canada and the northern United States for hunting purposes. In the Eurasian area, three species of the genus Perdix can be recognized, each typical of a distinct geographical area: P.durice is found in the Mongolian steppes and in Russia; P.hodgsoniae is typical of Nepal, China and India; and in Europe the P.perdix species is found. Within the P.perdix species, 7 subspecies are generally recognized, which are also typical of specific geographical areas.
– P.p.hispaniensis (Pyrenees and northern portion of the Iberian Peninsula)
– P.p.sphagnetorum (Holland and North-West Germany)
– P.p.lucida (Finland and Eastern Europe)
– P. p.armoricana (Brittany, Normandy and central France)
– P.p.canescens (Turkey, Caucasus, Iran and the Transcaucasian area)
– P.p.perdix (Scandinavia, British Isles and Central Europe to the Balkans)
– P.p.robusta (from the Ural river to north-western Siberia)
Some authors also recognize a smaller Italic subspecies of the Central European populations. 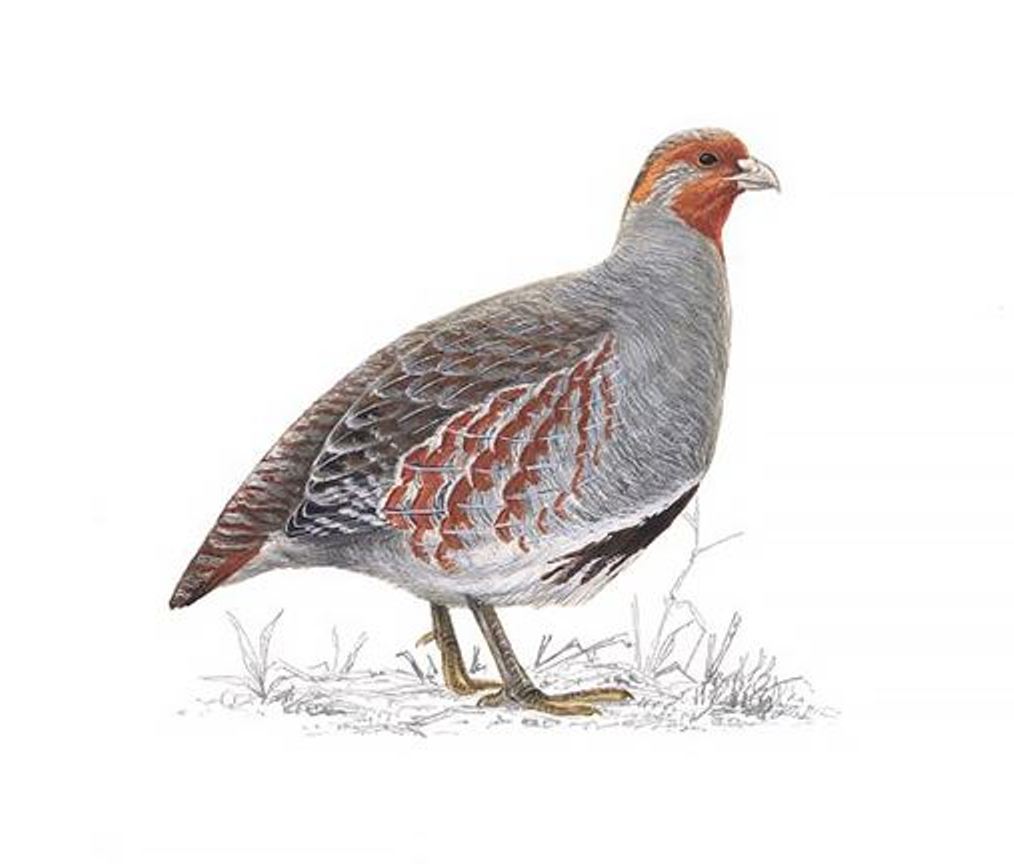 Description –
The Grey Partridge is a small bird of the order of the Galliformes. just 30 centimeters long, with a wingspan of about 45–48 cm. and with a plump body that has a small tail and short rounded wings.
The average weight is just over 400 grams, with slight differences between males and females depending on the phase of the annual cycle. It presents a sexual dimorphism mainly related to some features of the livery. The male in fact has a dark brown spot on the chest in the shape of a horseshoe also common to 50% of the females even if in the latter the spot is lighter and usually incomplete. In order to be able to establish sex with certainty, the coloring and streaking of the scapular feathers must be observed, the females have a streak in the shape of a Lorraine cross. Or during the reproductive period the orange periorbital strip of the males. The plumage is mainly blue gray and reddish brown, the young are lighter than the adults. The chicks have a tawny color with punctuations and black stripes.

Biology –
The Grey Partridge is a sedentary and gregarious bird with group size that has a seasonal pattern.
In the winter period, to rationalize the exploitation of scarce food resources, several family groups can be merged to form brigades composed of more than 30 individuals.
The pre-reproductive phase begins around February with the formation of couples and the disintegration of the winter brigades. At this moment an intense singing activity begins and a strong territoriality is created.
Nesting occurs between April and May. The nest is built on the edge of woods or cultivated fields, in a hole dug in the ground, sheltered from bushes and well lined with dry grass. After about 25 days of hatching, 10 to 20 eggs are laid, of a greyish-brown color. Deposition occurs at regular intervals of one to two days. The eggs are mainly hatched by the female. Births are concentrated in June, but hatching can go on until August. The chicks will then be looked after by both parents. The chicks are nidifugous, and the family group remains homogeneous up to 60 days from hatching; then it tends to include lonely adults, or couples who have not reproduced.

Ecological Role –
Perdix perdix is ​​a bird that feeds mainly on seeds and sprouts, but the animal component (small invertebrates) has a notable importance in the first three weeks of life of the chicks and during the reproductive phase. The environmental preferences of the partridges usually concern open spaces where traditional cereals and fodder crops are interspersed with small orchards and vineyards; very important is that close to foraging areas there are uncultivated grassy or bushy, with low hedges and small woods, which do not exceed one third of the size of the territory.
This bird moves on the ground with a typical gait. In case of danger, it quickly flattens to the ground, and remains immobile waiting for the threat to pass. He does not like flying, unless he feels in immediate danger but, even in this case, he will return very soon to land on the ground. The flight is however fast, sliding, with the rapid alternation of beats with short glides. The wings during the flight are arched.
The voice is typical: a low metallic note, strident and rhythmic.
This species is generally elusive and timid like the red partridge and in winter likes to reunite with other similar ones, with which it forms large groups, while in the rest of the year it shows more solitary habits.
The Red Partridge also shares the fact that it is a terrestrial species. As such, it moves within areas with grassy grassy vegetation that is not too high and flanked by hedges, forest edges, thick bushes that can offer shelter and a suitable nesting site. It does not disdain, especially for food purposes, not even land without vegetation; however, avoid areas that are totally desert, rocky or with cliffs; as it turns away from marshes, sea coasts, lake margins and forests.
A census of about twenty years, carried out on the partridge, estimated an amount between 15,000 and 16,000 specimens divided into 14 sub-populations. Most subpopulations are kept in balance by continuous repopulation for dog lovers.
Unfortunately, in Italy the partridge has been in a state of continuous decrease for half a century. The reasons for the decline of the species can be found in the increase in agricultural area cultivated with intensive monoculture in the lowland areas, in the abandonment of the hilly and mountain agricultural lands.