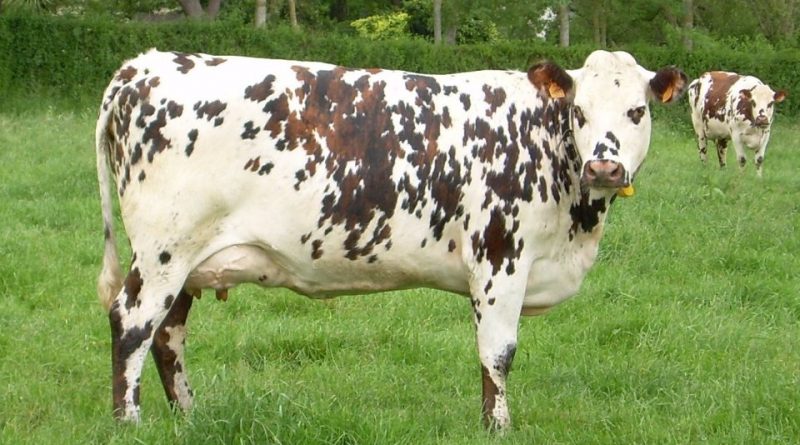 The Norman breed is a bovine breed (Bos taurus Linnaeus, 1758) originating from Normandy (France) but bred in the whole world with a dual aptitude for the production of meat and milk.

Geographical and area distribution –
The Norman breed originates from Normandy (France) from where it was exported to many countries and is present on all continents with a significant presence in Colombia with 380,000 head.
The exports of this breed to South America began in 1877 and beyond Colombia it is also present in Brazil, where the Norman was imported for the first time in 1923 and was also crossed with zebuino cattle to create a hybrid, the Normanzu . It has also been exported to many African countries (Madagascar).

Origins and History –
The Norman originated in Normandy in the early nineteenth century. This breed derives from the crossing of local dairy breeds including the Augeronne, the Cauchoise and the Cotentine (now extinct) with animals of the Durham breed (later renamed Shorthorn) imported from England from 1836 onwards.
The Alderney French population (now extinct) also contributed to its formation. The Norman genealogical book was established in 1883. The first bull performance test was introduced in 1952.
The Norman is today a very important breed in France where already in the 1960s there were about 4.5 million heads, which in fact represent a quarter of the national bovine populations. As for other breeds, its number has decreased over the years up to the 2005 estimate where the total number in France has been around 2.1 million head.

Morphology –
The Norman is also called the tricolor breed due to the presence of the three basic colors of the bovine mantles: white, black and red.
The coat is however characterized by dark brown streaks and stripes and spots with white, blond and brown hairs.
It also presents the head with a concave profile, broad and depressed forehead, large and protruding eyes, white in color as well as the ventral regions and extremities.
The mucous membranes are pigmented in a dark yellowish color, the horns are short and thin, white and waxy, facing forward.
The skin is very soft and the breast is very developed.
In general it is a robust and harmonious animal of considerable size: the females weigh around 650-700 kg and more, 1.42 m high at the withers and the males 1,000-1,300 kg, about 1.50 meters tall at the withers.

Production aptitude –
The Norman breed is mainly bred for its milk, which is rich in fat and suitable for making butter and cheese, but also for its meat, which is marbled and tasteful.
The annual yield is 6595 liters in a lactation of 316 days. Milk has 4.4% fat and 3.6% protein.
Performance for meat production is also good, with rapid growth in young subjects.
The Norman breed of cattle are long-lived very suitable for grazing, rustic, resistant and docile and that adapt a little in all environments. Females do not have problems with childbirth.
It has good resistance to both sunny areas and both hot and cold environments.