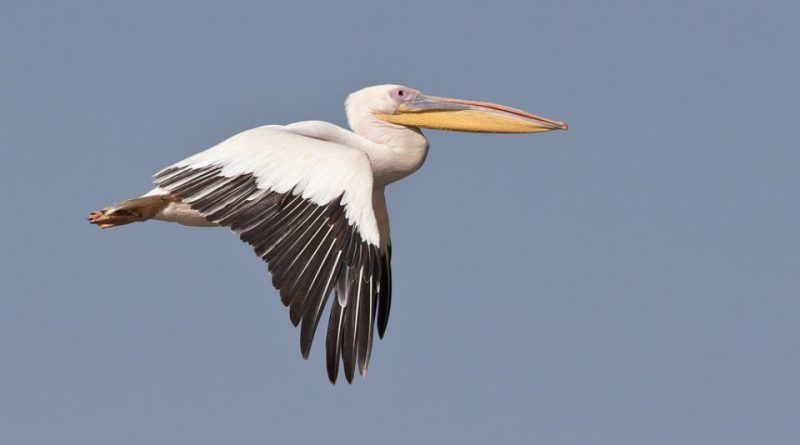 The common pelican or white pelican (Pelecanus onocrotalus Linnaeus, 1758) is a bird of significant size from the Pelecanidae family.

Systematics –
From the systematic point of view it belongs to the Eukaryota Domain, Animalia Kingdom, Phylum Chordata, Aves Class, Neornithes Subclass, Neognathae Superorder, Pelecaniformes Order, Pelecanidae Family and therefore to the Genus Pelecanus and to the P. onocrotalus Species.

Geographical Distribution and Habitat –
The White Pelican populates an area that goes from Eastern Europe (from the Danube delta) to western Mongolia. It is a migratory species that during the winter, from September to February, migrates to a territory that goes from north-eastern Africa and Iraq to northern India. Of this species there are resident populations in Africa, south of the Sahara Desert. There are also isolated sites in northwestern India and southern Vietnam. However Pliny the Younger (61 – 113) speaks of Pelicans also seen in northern Gaul overlooking the North Sea.
In Europe the habitat of the Common Pelican includes freshwater lakes, river delta, marshes and swamps: in practice, we find pelican where there are enough reeds and grasses for the construction of the nests. In Africa the habitat includes alkaline or freshwater plains and lakes. 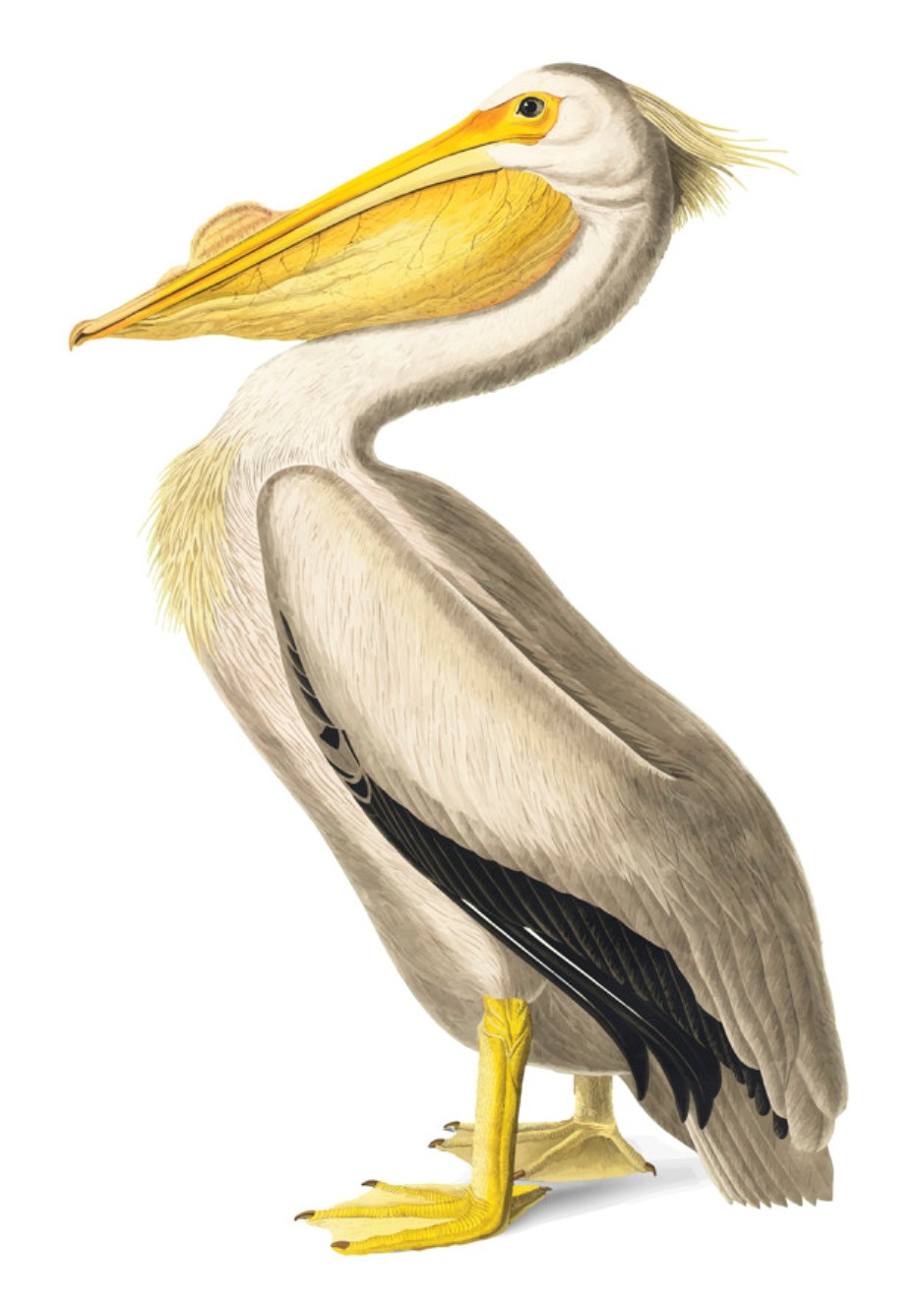 Description –
The White Pelican is one of the largest flying birds in the world. The Pellicano Bianco stands out from the other birds thanks to the webbed feet with 4 fingers.
It has an almost exclusively white plumage, with black and gray primary feathers. The body is large and has long and wide wings. The tail is short, as are the paws, which are pink in color. The Pellicano Bianco has pale yellow-pink spots around the eyes and a particular blue-blue beak at the top and yellow at the bottom, where its typical bag is found; the beak has a central red strip and ends with a small hook, always red.
This species has a slight sexual dimorphism; the male of the White Pelican is slightly larger than the female: in fact, it measures 175 cm in length, while the female measures 148. The male also has a slightly longer beak, which measures around 45-47 cm, while that of female measuring 29-40 cm. The weight of the Common Pelican male ranges from 9 to 15 kg, while that of the female ranges from 5 to 9 kg. Both sexes have a wingspan that reaches 3 meters in width.

Biology –
Pelecanus onocrotalus is a species that tends to nest in numerous colonies close together. In fact the pelican is a highly gregarious species and in the reproductive period it is possible to create nesting colonies of 30,000 pairs.
When found in the reproductive period, the Common Pelican can present a pink or orange-yellow plumage on the chest and on the throat: in fact, during the reproductive season, the male has the skin of the pink snout, while the female has a yellow-orange color .
In the temperate climatic zones of Europe, the reproductive season of the White Pelican takes place in spring; in Africa, on the other hand, it lasts all year. The breeding sites are the same where they live, ie large colonies near the water. The courtship rituals by the males include the display of the vivid colors of the pouch under the beak and a change in skin color. The formation of the couple, the selection of the place where to build the nest and its actual construction take place quickly: from a few hours, without however exceeding a week of time. During the breeding season, adult pelicans emit a low and raucous call.
The nest is built by scratching the ground and is covered with vegetation, grass, twigs, feathers and other materials available locally, or it can consist of little more than bare rock. The White Pelican lays two to four large white limestone eggs. The hatching period lasts from 29 to 36 days and, after the birth, the chicks put feathers between 65 and 75 days of life. The reproductive success rate of the Common Pelican is 0.64 chicks per attempt.
The white pelican chicks have a gray plumage and have dark remiges. Both parents take care of their care. Sexual maturity is reached at 3 or 4 years of life. The average life span of the Common Pelican can exceed 16 years.
The food that is procured exclusively in water consists of fish and shellfish. Often the pelican holds more prey in the beak.
Sometimes groups of common pelicans of 6-8 individuals arrange themselves in the water in a horseshoe formation, immerse the large beaks and, beating the large wings, catch the fleeing fish.

Ecological Role –
The Common Pelican is a bird whose diet is composed of fish (especially carp and cichlids), crustaceans, small invertebrates and sometimes waste.
The Common Pelican does not feed only on fish, but it is also an opportunistic food procurer: sometimes, in fact, it feeds on the chicks of other bird species. The pelicans that live on the Dassen Island, in the Atlantic Ocean, feed on Sula del Capo (Morus capensis) chicks, coming from the colony of this species that resides on the Island of Malgas, which weigh up to 2 kg. In addition to chicks, the White Pelican feeds not only on crustaceans and fish, but also on tadpoles and even turtles. He also accepts provisions from people, and several unusual foods have been recorded in his diet. During periods where supplies are scarce, the White Pelican also feeds on gulls and ducklings, and it is not unusual for it to steal prey from other birds.
Often the pelican holds the food by keeping it in the lower part of the beak called a sack. Before ingesting the nourishment, the pelican eliminates the water that has penetrated the bag together with the food, making it come out of the crack of the beak.
The imposing and long beak of the White Pelican is used to collect fish from water. The bag under the beak is elastic and can contain several liters of water. When the Common Pelican carries the beak under water, it opens it and lets the water and fish enter the bag; when he raises his head again, the bag contracts by letting the water out and holding the fish, which is swallowed whole. A specimen of White Pelican must take about 1.2 kg of fish per day.
The white pelican fishing technique requires shallow and warm waters.
Although the White Pelican is a very awkward bird on the ground, when it comes to flying it is magnificent and graceful and can cover distances of up to almost 480 kilometers without stopping, flying for a whole day and a night in a row. Pelicans usually fly in V flocks: a spectacular sight.
The Common Pelican is suitable for aquatic life: when it is on a stretch of water, this bird is as graceful as when it is in flight. Il Pellicano Bianco is a strong and fast swimmer able to reach a speed of 6 km / h: its strong legs, together with webbed feet, push them through the water and prepare them for their take-offs in the air, sometimes embarrassing .
When it is the nesting period, the White Pelican migrates to numerous colonies towards Eastern Europe and Asia, stopping at the banks of the Danube Delta, the Caspian Sea and the Black Sea. After the breeding season, pelicans they disperse in search of food.
Unlike migratory populations, some African populations are settled throughout the year.
The African population of White Pelican has about 75,000 pairs of specimens. The Common Pelican is not threatened globally, even if the European population is slightly decreasing in Europe (in particular in the area of ​​the Danube delta) due to human activity: in fact, man is the predator main of this bird. The White Pelican is hunted for different purposes: the bag is used to make bags for tobacco, the skin is worked to be used as leather, the guano (feces of seabirds, seals or bats) is used as a fertilizer, while the fat younger pelicans are turned into oil and used in traditional Asian medicine.
In the 2018 Red List of the IUCN (International Union for the Conservation of Nature) the White Pelican is classified as LC (Less Concern). The Common Pelican is one of those birds protected by the AEWA (Agreement on Conservation of Migratory Water Birds of Africa-Eurasia).
Pelecanus onocrotalus is a species very sensitive to pollution. Furthermore, due to overfishing in some areas, they often find themselves forced to travel long distances in search of sufficient food. During the migration, it happens that the pelicans die due to the collision with the power lines. Another common cause of death is drowning in fishing nets.
In general, it can be said that the disturbance of human activities, the reduction of fishing environments and reproductive sites, as well as pollution, are responsible for the decline of the White Pelican population.