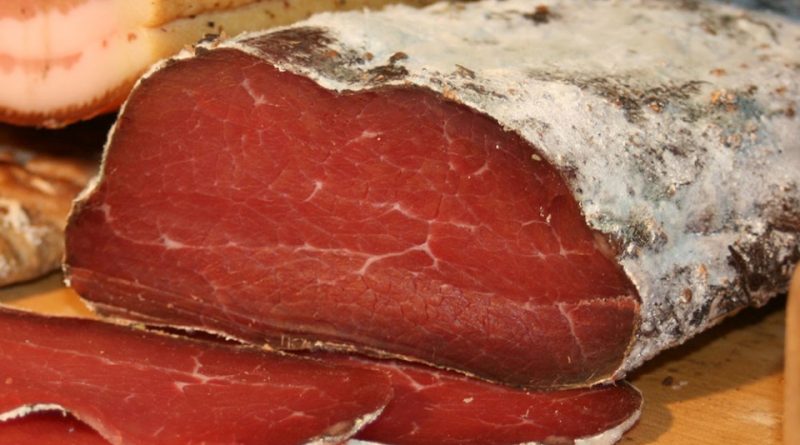 Bresaola della Valtellina is a cured meat with Protected Geographical Indication (PGI) recognized with EC Reg. N. 1263/96 produced in the area of ​​the province of Sondrio.

Origins and History –
The origin of the term “bresaola” is uncertain. According to some derives from “brasa”, brace, with reference to the braziers used in ancient times to heat and dehumidify the air of the maturing rooms; according to others the name derives from an expression of Valtellina that recalls the “brisa”, a gland present in cattle, with a tasty taste.
The Production Regulations have been incorporated into Italian law by decree of 23 December 1998 of the Ministry of Agricultural, Food and Forestry Policies.
In addition to the bresaola della Valtellina, which has been recognized as PGI, smoked bresaola and horse bresaola are also recognized as traditional food products.

Geographic area –
Production area of ​​Bresaola is the entire territory of the province of Sondrio (Lombardy).

Raw material –
Although the bresaola della Valtellina is processed in the traditional production area that includes the entire territory of the province of Sondrio, the meat used can come from cattle reared and slaughtered in other areas, especially imported (mainly from Brazil and Argentina ). The economy of the Province of Sondrio is considerably dependent on the fate of this import. In fact, the Zebu bovine subspecies is bred on the new continent and is particularly suited to the production of such preserves. The main alternative to non-EU meat is beef from Ireland. To obtain bresaola the following muscle parts are used:
– Topside: corresponds to the posteromedial portion of the thigh musculature and includes the internal rectus muscle, the adductor muscle and the hip-tip semimembranosus muscle: it is the most valuable cut, it corresponds to the part of the abdomen deprived of the adductor muscle. It has a minimum weight of 2.5–3 kg;
– subfesa: corresponds to the posterolateral portion of the thigh musculature and precisely to the long broad muscle and weighs at least 2 kg magatello: corresponds to the posterolateral portion of the thigh musculature and more particularly to the semitendinosus muscle and weighs at least 1 kg;
– under the skin: it corresponds to the anterior fascia of the thigh, composed of the anterior rectus muscle and the vast external, internal and intermediate muscle (femoral quadriceps).

Description –
The “Bresaola della Valtellina” when released for consumption must have the following organoleptic, chemical, chemical-physical and product characteristics:
– consistency: the product must have a firm, elastic consistency;
– appearance when cut: compact and absent from cracks; – color: uniform red with a faint dark edge for the lean part; white color for the fat part;
– perfume: delicate and slightly aromatic;
– taste: pleasant, moderately tasty, never acidic.
As regards the chemical and chemical-physical characteristics they must be:
– bresaola of hip tip packaged in bulk: max 63% humidity;
– vacuum-packed bresaola of hip: max 62% humidity;
– packaged magatello bresaola: max 60% humidity;
– bresaola pre-sliced ​​and vacuum-packed or in a protective atmosphere: max 60%.
– for all other types of cutting and / or packaging: max 65%.
Furthermore it must have a fat content: max 7%; ash: min 4%; sodium loride: max 5% and proteins equal to:
– bresaola pre-sliced ​​and vacuum-packed or in a protective atmosphere: min 33%.
– for all other types of packaging: min 30%.
On the basis of the product characteristics, the “Bresaola della Valtellina” has a vaguely cylindrical shape, although in some cases for specific needs, the cuts can be pressed taking the form of a tile.
The minimum weight of the “Bresaola della Valtellina” must be the following:
– bresaola di fesa: not less than 3,500 kg;
– bresaola di punta d’anca:
a) destined to be sold whole or in slices: not less than 2,500 kg;
b) intended for pre-packaging for vacuum slicing or in a protective atmosphere: not less than 2.00 kg;
– bresaola di sottofesa: not less than 1,800 kg; – bresaola di magatello: not less than 1,000 kg;
– curved bresaola: not less than 0,800 kg.
The Bresaola della Valtellina must carry the following indications on the label:
– “Bresaola della Valtellina”, which is untranslatable and must be affixed to the label in clear, indelible characters, clearly distinguishable from any other writing and immediately followed in print characters of the same size by the initials IGP and by the EU symbol, which must be produced in the language in which the product is marketed and in the form approved by the EC.
Furthermore, the addition of any qualification not expressly envisaged is prohibited. In any case, the use of indications referring to names or company names or private trademarks is permitted, provided they have no laudatory meaning or are such as to mislead the purchaser.
The “Bresaola della Valtellina” can be sold whole, in bulk or vacuum-packed, in pieces, in slices or sliced ​​vacuum-packed or in a modified atmosphere. The slicing and portioning operations must take place, under the supervision of the control structure indicated in art. 7 of the Specifications, exclusively in the production area indicated in art. 2 of the same.

Production Mode –
The production system of the “Bresaola della Valtellina” provides for the salting of raw materials; this process is carried out dry in steel tanks where the meat is sprinkled with salt (in quantities ranging from 2.5 to 3.5 kg per 100 kg, depending on the season), ground pepper and natural flavorings. Furthermore, wine, spices and sugars can be added (with the aim of favoring the microbial phenomena responsible for much of the product’s maturation), sodium and potassium nitrites and nitrates, ascorbic acid and its sodium salt. The salting mixture often changes from producer to producer and is handed down as a recipe to be jealously guarded. The salting process can last from 10 to 20 days, depending on the season, the size and the altitude of the place of processing. Every four days the pieces are transferred to new containers after eliminating the excess of brine by means of massage operations, which allow a more rapid and uniform migration of the salt into the product. In this phase the meat is flavored losing part of the free water present in the muscle tissue. Then the bresaola is washed and then stuffed into protective casings (natural or artificial casings) and sent to the next drying phase in special cells.
The drying process must allow rapid drying of the product in the first days of treatment. This is operated at a temperature between 20 and 30 ° C and in air humidity conditions of 35-65%.
After the drying phase there is the seasoning phase; this is carried out at a temperature between 12 and 18 ° C and in air humidity conditions of 70-90% for a period ranging from 2 to 4 weeks.
The seasoning rooms, as well as the drying rooms, must be equipped with facilities for maintaining and detecting temperature and humidity and must allow for optimal air exchange.
During the maturation process there is a noticeable drop in weight and a consequent flavor of the product due to the concentration of the aromas and salt, which make it possible to preserve the bresaola for quite long periods, while maintaining all the characteristics of taste, softness and digestibility.
This process also contributes to making “Bresaola della Valtellina” one of the cold cuts with the lowest fat content.

Gastronomic Use –
Bresaola della Valtellina is eaten raw and combined with various dishes and recipes, according to local traditions, or even according to international recipes; it is in fact a product sold and consumed all over the world.