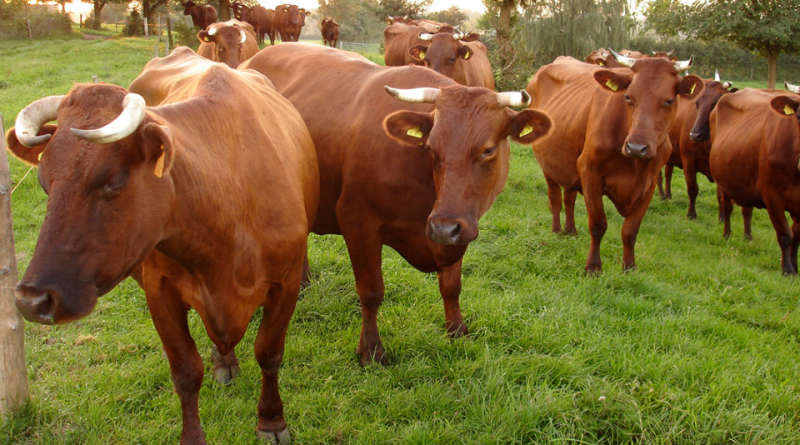 The Angler Rotvieh or Angler is a dual breed bovine breed (Bos taurus Linnaeus, 1758), originating from the Anglen peninsula on the Baltic coast in Germany.

Geographical and area distribution –
The Angler Rotvieh is raised in the area of ​​origin; the breeding area is the Angeln peninsula in northern Schleswig-Holstein. Schleswig-Holstein is the northernmost of the 16 federal states of Germany. Historically the name refers to a wider region, which includes today’s Schleswig-Holstein and the Danish county of southern Jutland. (Sønderjyllands Amt in Danish).
In Germany, around 20,000 red breeders are registered, of which around 15,000 are registered in the herd book. The females, in addition to some exceptional young heifers, are paired with the best bulls available to produce future generations of young bulls. Because of their great performance, German red cattle have long been used to improve the indigenous red cattle populations in the following countries: Estonia, Latvia, Lithuania, Russia, Ukraine, Kazakhstan, Poland, Denmark and Australia. Recently, German red cattle have been exported to Algeria, Saudi Arabia, Japan, the Netherlands, Italy, Canada, Chile, Spain, New Zealand and the United States.

Origins and History –
The Angler Rotvieh breed was formed from ancient local ancestors in the mid-nineteenth century. The first written references to the Angler breed date back to the 16th century. This breed has often been crossed with other breeds including the Danish Red. However, this is probably a cattle that has existed for over 5000 years in Germany. The planned breeding has been practiced since 1830 and a central genealogical book existed in Süderbrarup since 1879.

Morphology –
The Angler Rotvieh breed is characterized by a uniform dark red coat, up to brown. The muzzle is black and the horns are short. These are slender animals of medium-low stature. Adult females: weigh 550-630 kg, with a height of 125-135 cm. It is characterized by excellent feet and legs, good claws and good breast health.

Production aptitude –
The Angler Rotvieh is a dual-purpose breed (milk and meat) with prevalence for milk production and less for meat production. This breed is distinguished by a good yield in the processing of feed for milk production, with high content of solids.
Young cows grow fast and give birth without problems at the age of 24 months. The young bulls have a good daily income and acquire a weight of 400 kg at the age of one year. Cattle are also excellent for the production of calves (body weight 145 kg).
Currently the production is 5,300 kg / lactation, with 4.7-5.5% of fat and 3.5% of protein.
Given the high fat content of milk, at least 5.4%, the Angler Rotvieh were known as “German butter cows”. Also the protein content is very high and most of the males are carriers of the kappa casein gene, therefore in milk it has excellent characteristics for the production of high quality cheese. The meat is tender, marbled with fat and holds water very well.