Systematic –
From the systematic point of view it belongs to the Domain Eukaryota, Kingdom Plantae, Subarign Tracheobionta, Superdivisione Spermatophyta, Magnoliophyta Division, Magnoliopsida Class, Subclass Hamamelidae, Order Fagales, Family Juglandaceae and then to the Genus Juglans and to the Specie J. Nigra.

Etymology –
The term Juglans derives from Iupiter Giove and from glans acorn: acorn of Jupiter. The specific epigrable nigra is due to the presence of blackish organs.

Geographic Distribution and Habitat –
Black walnut is a plant native to the eastern United States where it forms mixed forests, from sea level to the lower mountain belt. The tree was introduced in Europe around 1630, where it was widely used in parks and gardens; in Germany it was experimented as a forest essence. 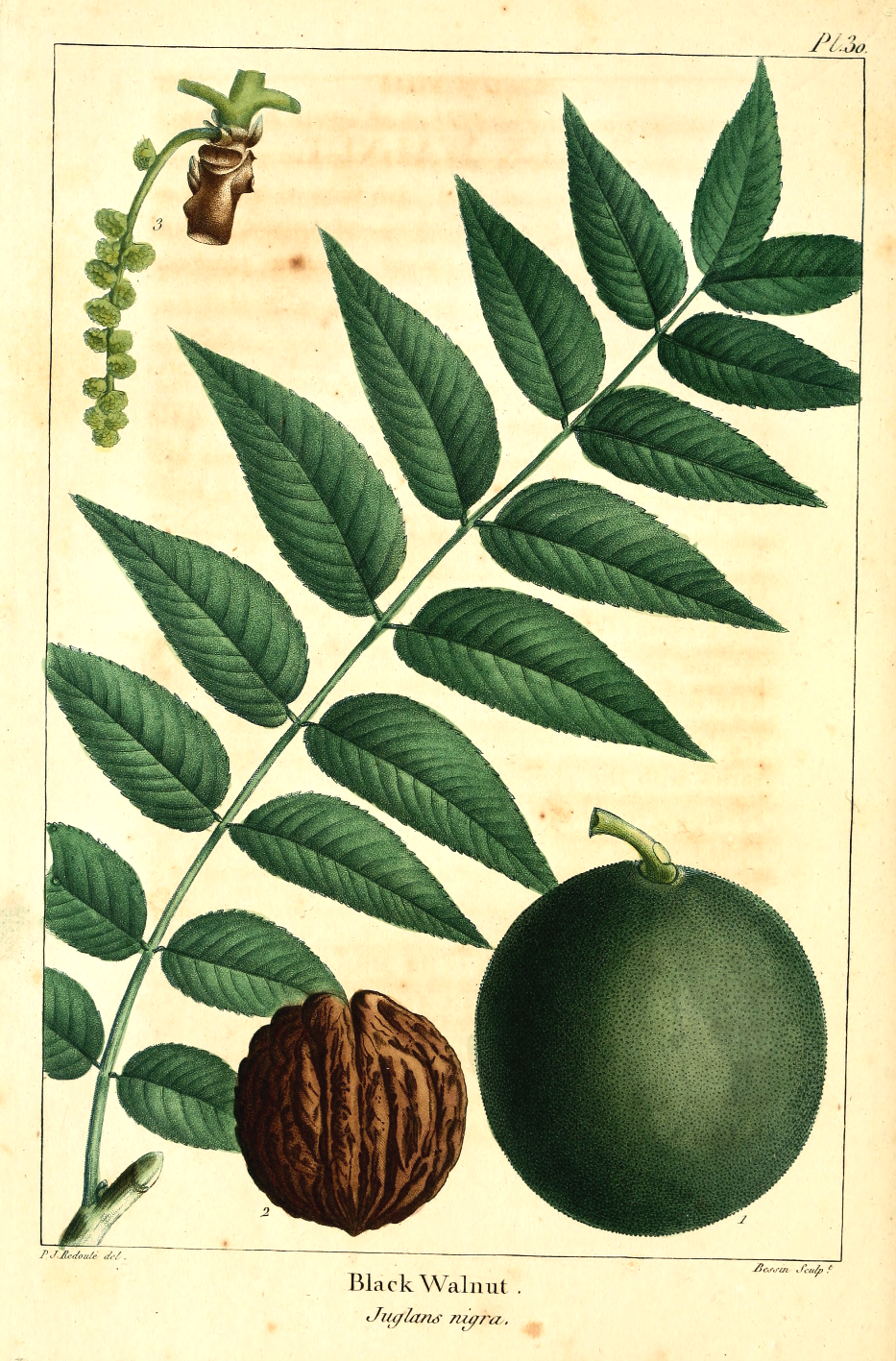 Description –
Juglans nigra is an arboreal species that in areas of origin can exceed 50 meters in height. Its foliage is expanded and light green in color and has a straight, sometimes gnarled trunk with brownish-black rind furrowed longitudinally. The leaves are deciduous, alternate, composed, imparipinnate with 15-23 ovate-lanceolate leaves in a serrated margin 6-12 cm long, light green on both pages. It is a monoecious plant and unisexual flowers, in which the males are gathered in pendulous axillary catkins, provided with bracts and numerous stamens, and the female ones are terminal and united in groups of 1-3. The fruits are solitary or pair-shaped drupes of round shape, with husk with rough surface, inside which there is a blackish roundish walnut, very woody and wrinkled that contains a seed with a strong and unpleasant taste.

Cultivation –
The cultivation of Juglans nigra can take place from the seed that must be placed in the substratum, after cold stratification for 90-120 days, as happens in nature where many specimens are born in spring from walnuts buried by forgetful squirrels in autumn. In some cases, however, the germination occurs during the second spring and not during the first. Alternatively you can take jets from strains of young specimens to be rooted. It is a fast-growing plant on fertile and fresh, non-calcareous soils and is resistant to pollution.
Black walnut can act as rootstock for other congeners including the common walnut. For its characteristics, black walnut is a tree suitable for large spaces, far from buildings potentially damaged by its root system, ideal or as an isolated specimen or, where possible, in small groups or associated with the same essences with which it normally lives in nature , ie sugar and oak maples. If the tree is bred for ornamental purposes, no systematic pruning is necessary, different than the discourse for those who cultivated the piata for its wood. In any case left to himself the black walnut becomes a beautiful tree, majestic and robust. Falling fruit in the fall may be a problem in public areas, even considering the additional maintenance to keep the area under the tree clean. Remember that this plant produces, with its roots, the juglone which, due to allelopathy, is toxic to other plant species and does not allow it to grow near the walnut tree.

Uses and Traditions –
The wood of black walnut, although less valuable, has the same characteristics of European walnut, but the plant shows a faster growth. The wood of this plant has a specific weight of about 650-700 kg / m3, with white sapwood tending to yellow, chocolate-colored heartwood, sometimes characterized by purple streaks. The dark color allows it to be combined with lumber from Juglans regia, after appropriate decoloration with bleaching agents, such as hydrogen peroxide.
Juglans nigra timber is commonly used in Italy and worldwide. In Italy, the wood of this tree is commercially known as black walnut, American walnut or American walnut and is mostly used for furniture and veneers.
This plant is also used for road trees and for parks and gardens, although for the fall of the fruit is more suitable for parks and gardens and less for road trees.

Regarding other uses:
– the hull is used to produce a writing and drawing ink, which boasts excellent durability properties. Throughout history it has been used by many great artists, including Leonardo da Vinci and Rembrandt. It contains active ingredients, of which the most important are juglone, tannin and iodine. Juglone is a component of both hull and leaves, bark and roots;
– with the maceration and decoction of leaves and fruits, very solid dyes are obtained. With green malle, without the need for mordant, they are dyed brown wool and silk; with dark malli you get a greener shade. With the leaves and the chrome it is tinged with beige, while with the iron sulphate a deep and brilliant black is obtained, also on the cotton. It was used in North America to dye wool in a dark brown and black color. This dyeing process was then used, after the discovery of the Americas, in many European countries. The husk, removed from the fruits still green, should be immersed in water, kept in the dark for one night and boiled for 2 hours. In this liquid the wool previously ‘mordenzata’ is immersed (the etching is used to fix the color) adding iron sulphate or sumac berries (Rhus coriaria L.), finally obtaining a dark brown color. A lighter color is obtained, following a similar procedure, using the common walnut husk (Juglans regia L.). This dye is also used as a hair dye; the warnings are to use gloves and not to make dye interact with the skin. The result is a brown color, more or less dark depending on the dilutions;
– the carbonized root was similarly used for black coloring by the natives of North America, while during the War of Secession, the armor uniforms were dyed with walnut bark. Even today, on the Bolivian plateau, weavers use dyed wool with walnut husk to make traditional local shawls, manta;
– from the seeds it is possible to extract an edible oil, more used in the paint and soap industry.
– the nuts are edible but of little value.

Preparation Mode –
The Juglasn nigra can also be used for food purposes but it is the oil that is derived that the fruits are of poor food value.