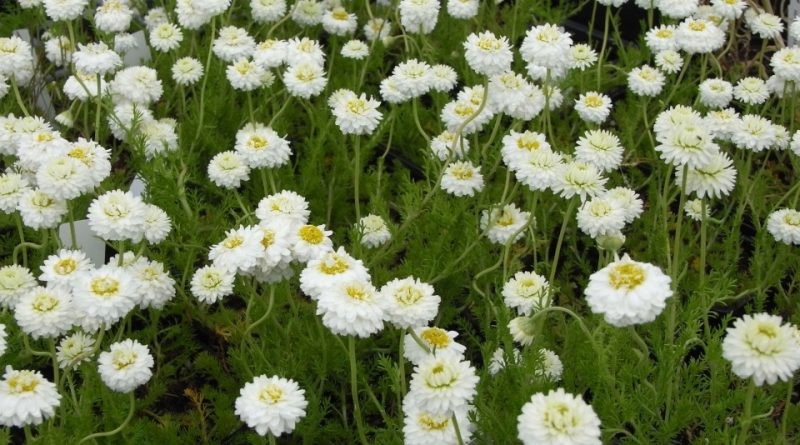 The Roman chamomile (Chamaemelum nobile (L.) All.) Is a perennial herbaceous species belonging to the Asteraceae family.

Etymology –
The term Chamaemelum comes from the Greek χαμαίμηλον chamaímelon (from the prefix χᾰμαι- chamai- on the ground, creeping, nano and from μῆλον melon pomo) because, according to Pliny, its flowers smell like apple. The specific noble epithet has been attributed to him for his famous notable healing properties.

Geographic Distribution and Habitat –
The Chamaemelum noble is a plant native to Western Europe and has spread successively in northern and central Europe as a cultivated species, but under favorable conditions it has dried up. Its habitat is that of dry and uncultivated land. In Italy it is cultivated but rarely found in the spontaneous state. 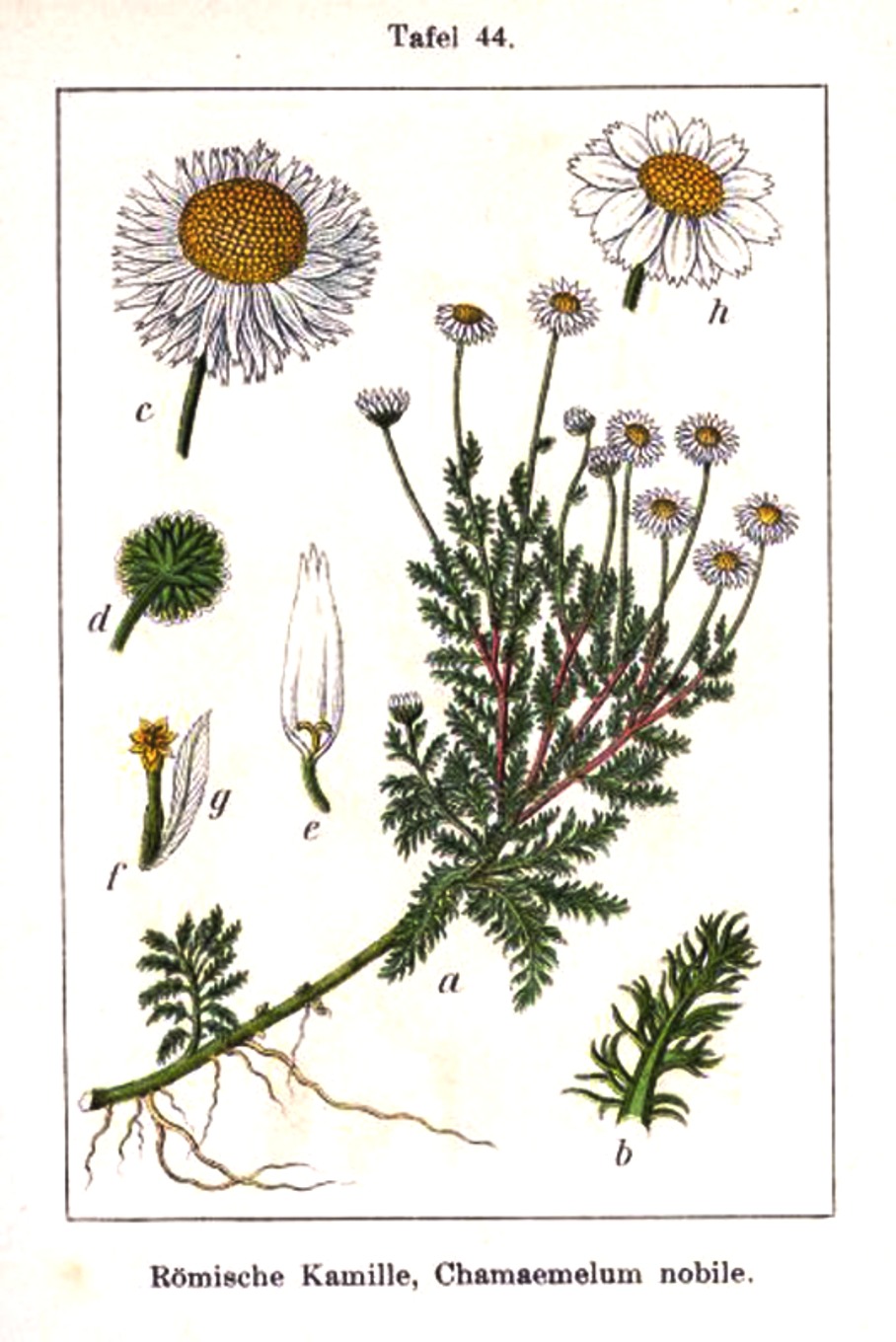 Description –
The Chamaemelum noble, also called Roman chamomile, is a perennial herbaceous species characterized by having ascending stems, ie at first they are creeping then they become erect and flexible, which can reach a height of 40 cm. The leaves are bipinnatosette with short lacine. The flowers are terminal, solitary white and very fragrant.

Cultivation –
For the cultivation of the Roman chamomile we proceed starting from the sowing that is carried out in spring on fertile and loose substratum. Once developed, the seedlings can be placed in full or potted land, in sunny areas and with well-drained soil. Adult plants can be multiplied by cuttings or by division. Of the Roman chamomile flowers are used collected at the beginning of flowering, when the flower heads are not yet well hatched and are still a beautiful white color. It is preferable to make the harvest on dry days and preferably in the evening when the plants are dry and dew-free so as not to compromise the subsequent drying. They must be dried quickly in a dry, dark and ventilated place to avoid the formation of molds and the blackening of the plant with consequent loss of its characteristics.
They are stored in glass containers protected from light but it is preferable to keep them for no more than one year and then renew the stock.
If the product is intended for distillation to obtain essential oils, the fresh or freshly dried product is used.
For details of the cultivation technique, the following sheet can be consulted.

Uses and Traditions –
The origin of this plant is unknown, as it is not mentioned in antiquity; the first reference is from 1500, when it was reported in London as a pest. Today, from the Roman chamomile an essential oil is extracted which is considered among the sweetest essential oils and therefore particularly suitable for children. The essential oil is obtained thanks to the distillation of the floral tops. It is used, especially in aromatherapy as a sedative, antispasmodic, anti-inflammatory, antiseptic and antimicrobial. Chamomile attenuates spasms and pains, facilitates digestion and is invigorating on the liver.
The Chamaemelum noble is used for the treatment of insomnia, anxiety and stress, for toothaches and headaches, for muscle pain and neuralgia, but is also known for its calming capabilities.
The essential oil of Roman chamomile has a warm, herbaceous and slightly floral scent, which has the effect of appeasing, decongesting and dissolving tensions. It is suitable for alleviating anxiety and stress, encouraging and improving liver function; moreover it loosens the blocks at the diaphragmatic level, favoring their relaxation and the expulsion of restrained and compressed air due to anxiety and nervousness.
Among the most known effects of the essential oil of the Roman chamomile we obviously remember that as a remedy for insomnia, in fact it assists sleep and its phases. In addition, the essential chamomile oil works on all the problems of the digestive system. Bisabolol, which is the main component (10-25%) of chamomile essential oil, has shown bactericidal and anti-ulcer activity to prevent stress and alcohol damage. Thanks to its relaxing and relaxing properties it is suitable for relaxing massages. It is also indicated for circulatory problems, telangiectasia (innocuous dilation of small blood vessels) and intoxication of tissues due to excessive muscle tension.
The essential oil of Roman chamomile can be used safely even on people known to be sensitive to the plant, because the allergen is not contained in the extract. Indicated for eczema, dermatitis, psoriasis and fungal infections, it alleviates sunburn. This essential oil is suitable for all skin types: dry and reddened, couperose, acne and even anti-wrinkle, because it is an excellent tissue regenerator. Finally, the essential chamomile oil can also be used as a treatment for skin and hair care, especially if sensitive and irritated.
In general, therefore, the essential oil of Roman chamomile has the following properties: antalgic, anti-inflammatory, antiseptic, antispasmodic, sedative, tonic, eupeptic (which helps digestion), emmenagogue (promotes the menstrual cycle), carminative (favors the expulsion of intestinal gas); it also helps in case of stomach and menstrual pains and in colds.
The essential oil of the Roman chamomile contains: blue camazulene which turns brown to light, flavonoids, coumarin, alcohol, fatty acids, glucosides, potassium, vitamin C.
Roman chamomile is not recommended for those suffering from diarrhea and in pregnant women.

Preparation Mode –
Our grandparents used to prepare very light cloth sachets containing chamomile flowers for half, for another half peppermint leaves and a half dose of asperula to put under the pillow to reconcile sleep.
For external use the infusion is used to wash the inflamed skin and to gargle for a sore throat.
Hot packs help in case of liver colic.
The chamomile and rosemary suffumigi cleanse, soothe and soften the skin.
The decoction added to the bath water relaxes as well as decongesting the skin.
If used to rinse the hair after washing, lighten it.
Chamomile is notoriously used in the kitchen to prepare excellent infusions that are drunk or for therapeutic use or simply to delight our palate because Roman camomile provides a tea that remains more bitter than that of common chamomile.
Roman chamomile is used in jams, candies, ice creams, chewing gums and in the confectionery industry in general and for flavoring liqueurs such as vermouth.
In the past the flowers of Roman chamomile were used as dried as pipe tobacco.
Roman chamomile is used for vermouth, wines and herbal liqueurs.