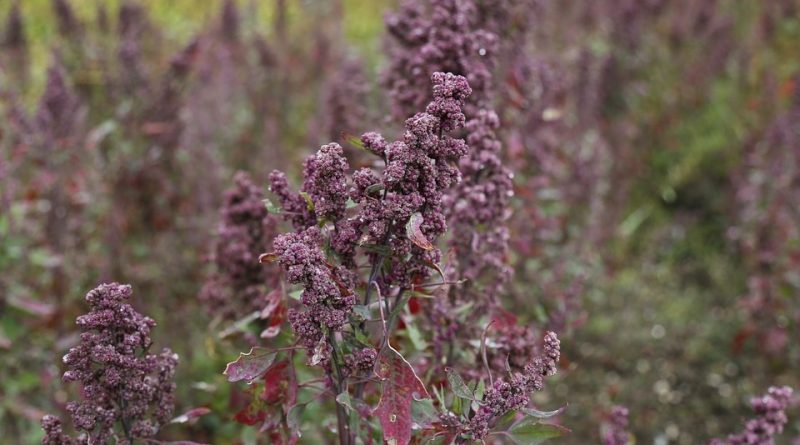 Systematics –
From the systematic point of view it belongs to the Domain Eukaryota, Kingdom Plantae, Division Magnoliophyta, Class Magnoliopsida, Order Caryophyllales, Family Chenopodiaceae and therefore to the Genus Chenopodium and to the Specie C. quinoa.

Etymology –
The term Chenopodium comes from the Greek χήν chén oca and from πóδιον pódion foot: in reference to the shape of the leaves. The specific quinoa epithet is the Spanish transcription of kinwa (occasionally Qin-wah), which is the name of this plant in Quechua language and which means: mother of all seeds.

Geographic Distribution and Habitat –
The origin of quinoa is to be found in South America; in an area between the Andes, Bolivia, Peru and Chile. Chenopodium quinoa is a plant whose cultivation is lost in the mists of time; certainly cultivated for over 5000 years on stony and arid highlands at over 3000 m altitude; plant symbol of biodiversity with as many as 200 cultivars. 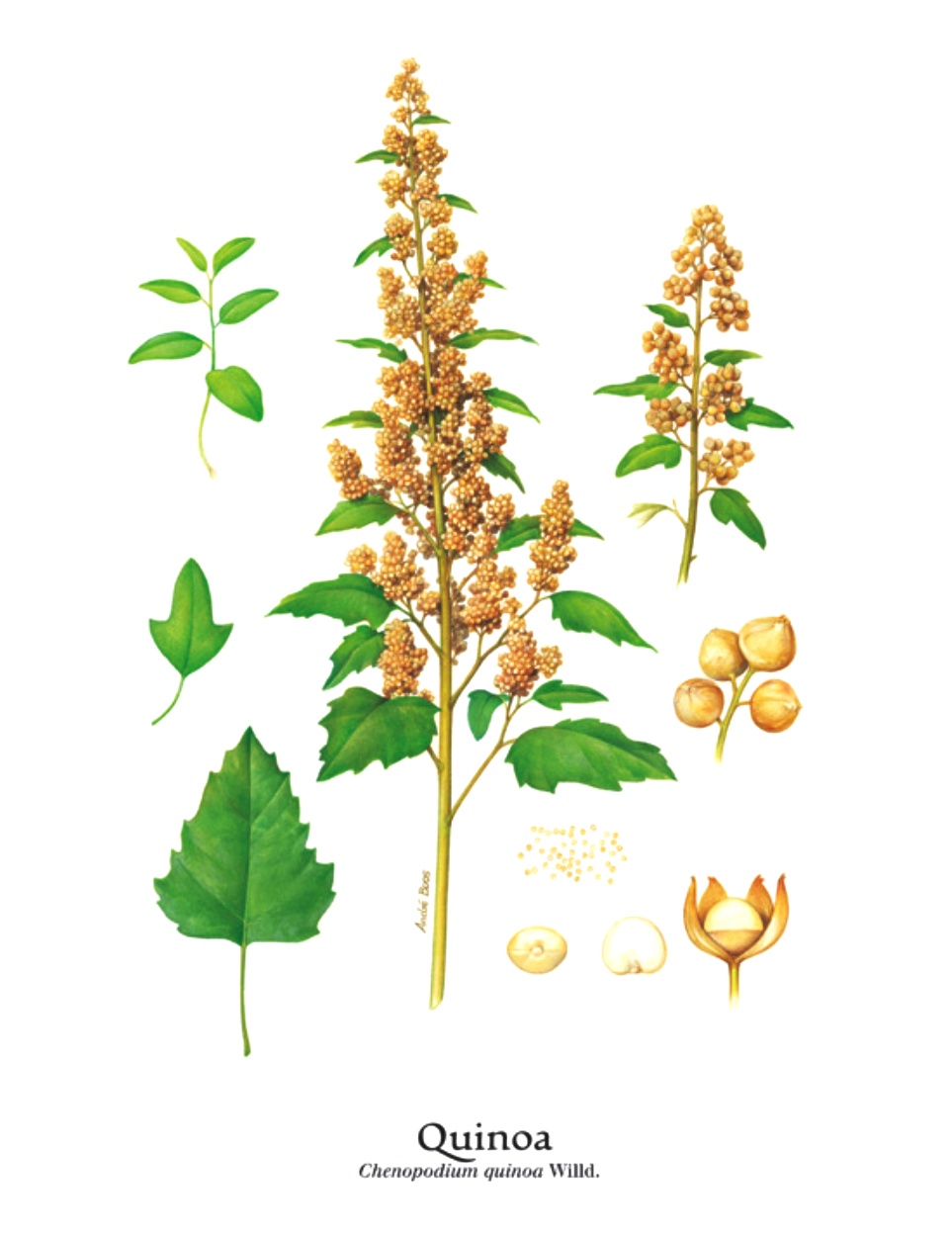 Description –
Chenopodium quinoa is a plant characterized by a dense root system, very deep (it can reach 180 cm) and branched out that gives the plant a great resistance to drought.
The stem is woody, of diameter between 1 and 8 cm, erected with height from 30 cm to 3 m; from this the ramifications develop, with a variable color from green to red and often streaked with a marrow that disappears when ripe, leaving the stem dry and empty.
The leaves are alternated, long petiolate with a variable shape depending on the variety (diamond, triangle, lanceolate, flat or wavy). At the base you can have large, rhomboidal or triangular leaves, while in the upper parts the leaves can be small and lanceolate. Even the color of the leaves is very variable, going from green to red with different shades.
It has a panicle inflorescence with a central axis, a secondary and a tertiary with the pedicels that hold the glomeruli; the inflorescence has variable lengths (depending on the genotype and soil fertility) from 30 to 80 cm in length and from 5 to 30 cm in diameter. The number of glomeruli per panicle varies from 80-120 and the number of seeds per panicle can range from 100 to 3000. The flowers have a maximum size of 3 mm, devoid of petals and consist of a corolla composed of tepals and usually of five sepals of green color. The flowers can be hermaphrodites, or there may be dioecious plants. The flowers are self-fertile and pollination is generally anemophilous.
The fruit of quinoa is a very small, roundish, flattened achenio, with a diameter of about 2 mm, protected by perigonium, which is the same color as the plant. The seed is also flattened, is obtained from ripe fruits without perigonium, may have an ellipsoidal, conical or spheroidal shape and may be white, beige, light yellow, light brown, red or black.

Cultivation –
Quinoa finds the optimal conditions for sowing when the soil has a temperature between 7 ° -10 ° C up to a maximum of 18-20 ° C and a good humidity to facilitate seed germination.
For the germination of quinoa seeds (as for spinach) the soil temperature should not be too high; to avoid this problem it may be necessary to refrigerate (vernalization).
The cultivation of quinoa in Italy shows the following limits: temperatures above 32-34 degrees even for a short time tend to cause pollen sterility in most crops; higher rainfall and high atmospheric humidity cause germination of mature seeds still on the plant. Quinoa must be harvested appropriately, not only to avoid losses due to the harmful effects of the climate and bird attacks, but also to the deterioration of grain quality. For details of the cultivation technique, the following sheet can be consulted.

Uses and Traditions –
The Inca called quinoa: chisiya mama, which, as mentioned, in Quechua language means “mother of all seeds” but also renamed “rice of the Incas”, since it was the basis of this people’s diet for millennia. Due to the almost sacred role that the quinoa had among the Andean populations, at the time of the Spanish conquest there was an obvious conflict with the Catholic culture that, on the contrary, gave a centrality to the wheat bread in the Eucharistic rite, and therefore the wheat . The cultivation of quinoa was thus fought and discouraged; only at a later time, when the best adaptation of the quinoa to the Andean environment became apparent, its cultivation took off again.
The seeds of this plant, subjected to grinding, provide a flour containing mainly starch, which allows this plant to be classified merchandise fully as a cereal despite not belonging to the botanical family of grasses or poaches.
It has a high protein content and total absence of gluten, which makes it a food of indiscreet value for world food. Even the young leaves, before flowering, for their high nutritional value containing mineral vitamins and proteins, are suitable for human consumption.
It is no coincidence that FAO has dedicated a year, 2013, also in consideration of its role in the fight against hunger and malnutrition.
The problem is that, although it is a cultivation of potential economic interest, quinoa is difficult to cultivate in environments with a different climate, both for climatic problems and for phytopathological problems; reason for which a careful search should be made for the association of this plant in a model of agroecological agriculture.
There are currently over 200 varieties of quinoa. The most used variety is the Quínoa Real with a low content of saponins. Other varieties marketed are: Bear, Cherry Vanilla, Cochabamba, Dave 407, Gossi, Isluga, Kaslala, Kcoito, Linares, Rainbow, Red lighthouse, Red head (which has a good adaptability to rainy climates), Temuco.
Quinoa seeds contain slow-absorption carbohydrates which, in its case, make up about 70% of the components and are of average glycemic index, so they do not cause large insulin changes. It is therefore suitable for diabetics but also for those who do not want to get fat, because it has a high satiating power. But one of the main strengths is represented by proteins (13-15%), of high biological value because they contain all the essential amino acids (including lysine, generally deficient in cereals). Just think that in a cup of quinoa cotta there are 8g of protein; in the same amount of brown rice there are 5 and in barley 3.5. The ideal is to associate it anyway with small doses of legumes, otherwise these proteins are not sufficient.
Other important components are antioxidants, in particular flavonoids, enemies of premature aging and tumors. Quinoa is also provided with excellent quantities of lipids (6.3 g / 100 g against 4.7 for maize and 2.2 for rice). It is mostly polyunsaturated fats (omega 3 and omega 6), able to prevent cardiovascular diseases and many other problems. No less important are the fibers, which perform a series of fundamental functions for the organism: among other things they stimulate digestion and satiety, promote intestinal regularity, keep cholesterol low, regulate glucose levels and insulin. The content of these substances is higher than in other cereals (but lower than in legumes).
Among the minerals are mainly magnesium, iron and zinc. As far as vitamins are concerned, E is an excellent antioxidant, and various from group B, in particular riboflavin and folic acid. All these benefits are obtained using the decorticated (ie integral) quinoa, not the pearled, ie refined quinoa.

Preparation Mode –
With the quinoa you can prepare a series of first or single dishes, desserts and even drinks.
But let’s see the various uses in general:
– Grains: The typical taste is appreciated even more if the grain is ground or transformed into cream. It is never wrong to combine quinoa with other products originating in the Andean territory: potatoes, tomatoes, corn, pumpkin, peppers and the typical red beans, not to mention the other vegetables of his family such as spinach, beets and beets. But you do not even risk accompanying it with legumes such as lentils and chickpeas or marrying it in desserts with chocolate or coffee. Thanks to the particular consistency of the cooked grain, quinoa is also a perfect counterbalance to the softness of the fruit and the crunchiness of the oil seeds. It is then worth turning it into a tasty dessert by cooking it with almond or rice milk.
– Flour: it is obtained by grinding the grain provided with fibrous coating, and is therefore a wholemeal flour. It can be used in sweet and savory dishes, it is excellent for dry pastries (biscuits) and for weaning (in this case it is advisable to directly grind the beans at home, as it is used). It is not suitable for “classic” bread and is used for the preparation of cakes and breads that do not have to inflate much, mixed with other flours (rice, buckwheat, etc.).
– Flakes: available in stores of natural products, they are suitable to be consumed in breakfasts, alone or better still mixed with other flakes and dried fruit to taste.
And finally, in case you manage to grow it in suitable weather conditions you can use the young leaves in the same way of spinach and farinello.