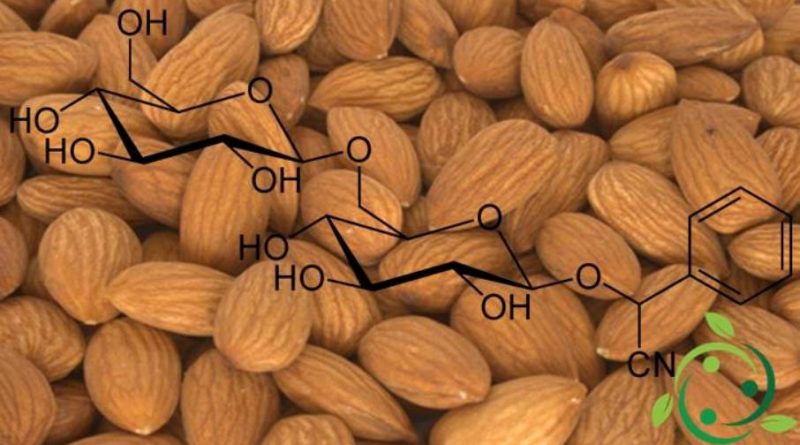 Amygdalin (D (-) – mandelonitrile-β-D-gentiobioside) is the most important of cyanogenic glycosides. This glycoside is present to varying degrees in the seeds of different Rosaceae and especially in bitter almonds, where it is present in the measure of 2.5-3.5% (while the sweet ones contain it only in traces). Amygdalin is present in peach pits (2-3%), apricot (1%), plum (0.9%), cherry (0.8%), apple (0.6%), of laurel, etc. smaller quantities are also contained in the fruits, leaves, flowers and bark of the Rosaceae.
Amygdalin is a cyanogenic glycoside, thus able to release cyanidric acid in various chemical reactions. Amygdalin is generated by condensation of mandelonitrile with a disaccharide (genziobiose) consisting of two units of D-glucose combined with β-glucosidic binding. Amygdalin, in its molecular constitution is not very reactive but reacting with the enzyme beta-glucosidase, glucose, benzaldehyde and hydrogen cyanide are obtained.

Emulsin, which is an enzyme contained in the seeds of bitter almond, but in cells distinct from those containing amygdalin, if it comes into contact with this work its decomposition in the three molecules above. For this reason if emulsin and amygdalin are ingested together, there are strong symptoms of hydrogen cyanide poisoning, even in very small doses.
Molecule similar to amygdaline is laetrile (containing one less glucose molecule); this substance seemed to have anti-tumor activity; this discovery is due to a physician from San Francisco (Dr. Ernst T. Krebs) but the text on rodents but warning of its use for human purposes because the substance had an unpredictable and dangerous behavior. However, its antitumor efficacy has been the subject of numerous researches and studies without this having been confirmed, even though some people today still use amygdalin (or its derivatives) to supplement or replace proven efficacy therapies.