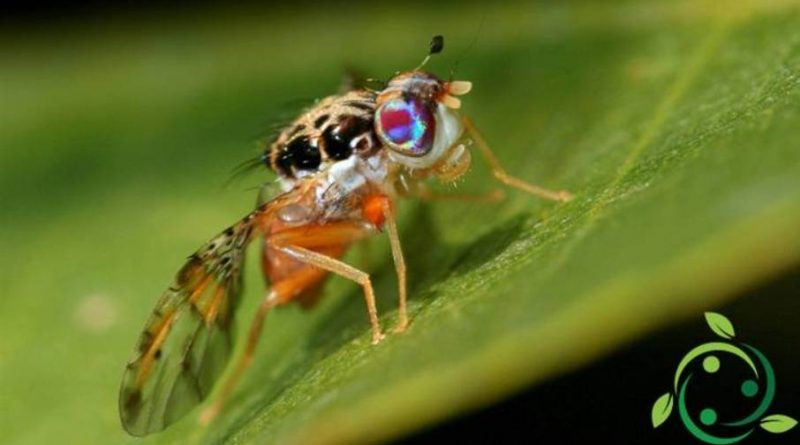 The Mediterranean fruit fly, known as the fruit fly (Ceratitis capitata Wiedemann, 1824), is a phyllophagous insect of the order of Diptera Brachiceri.
As its larva develops as carpophorus and polyphagus within the pulp of many fruits represents one of the most economically significant adversities affecting the summer fruit produced in the Mediterranean, in this sheet we see what can be the natural remedies against fruit fly. This diptera is recognized for having a body about 5 millimeters long, large eyes and metallic color, with whitish and black thorax, while on the abdomen you can see alternating ocher and whitish transversal bands. The wings are transparent and marked with symmetrical orange designs. Instead the larvae are not very showy; they have a dirty white color but, as mentioned, they are the main cause of the damage.

The first damage is due to the puncture of the adults who lay their eggs by perforating the fruits and causing chromatic alterations, softening and rotting. From the hatching of the eggs the larvae are born that dig tunnels inside the fruits to feed themselves; in this way the mushrooms and molds settle in the tunnels, which are the cause of the softening and rotting of the pulp.
From these larvae grown adults, after coupling of the same, there is a second generation more numerous and harmful. Before speaking of the fight against Ceratitis, it must be said that many causes of its virulence are due to incorrect production techniques of the various orchards, among which we include: 1) excessive specialization; habitat choices unsuitable for some fruit varieties; inappropriate fertilization techniques (often with excess nitric nitrogen); poor knowledge of agro-ecological rules such as: presence of other herbaceous species where insects and useful predators nest, use of grassing, mulches, etc.
However, returning to the specifics of the fight, this is based on two fundamental techniques: monitoring and active defense that make it possible to verify the presence of the parasite and actively intervene to eliminate the problem.
The monitoring is carried out with chromotropic traps that are yellow panels (which attracts the insect) covered with non-toxic glue for man and the environment.
The actual defense (once the minimum intervention threshold has been established) can be performed in different ways, sometimes even complementary to each other. The most effective containment system is called “Attract and Kill”; this method exploits some substances to attract adult males and females, contained in traps with the presence of glues, solutions (which may contain insecticides) on which the adults who die are trapped. Obviously if we are operating under organic farming conditions, the traps must not contain any insecticide not allowed in organic farming and, failing that, they only perform the attractive function and finally the glue. Traps contain formulas permitted in organic farming.
For a massive and adequate control it is necessary to set up a good network of traps; these vary (depending on some variables, such as type of orchard, planting size, monitoring results, etc.) from 50 to 100 units per hectare. The trap labels already indicate the correct densities and positioning technique. Let us remember, however, once again that the true biological fight against parasites and adversity arises during the design phase of a fruit (if it is a mixture of productive preparations) and of the choice of varieties, cultivation techniques and agronomic criteria.