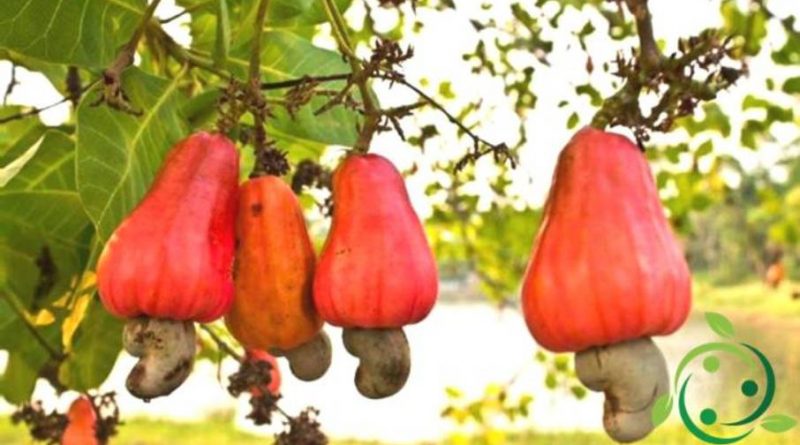 How to grow the cashew in a biological way

The production of the cashew (Anacardium occidentale L.) is typical of India and West Africa even if the plant is native to the Amazon.
The cashew is used for the contemporary production of two types of fruit: a fresh one, the “cashew apple”, which in Brazil is called “cashew apple”, while in Central America it is called Marañón, and a dry one , which is the “almond or hazelnut cashew” called in Brazil “cashew nut or cashew almond”. The cashew apple, from a botanical point of view, is a false fruit being generated by the hypertrophy of the flower peduncles and can reach the size and shape of a round pear.

This has a smooth, very thin surface, of a variable color from yellow to bright red, with a fibrous pulp. The “almond or cashew nut” (the real fruit) is a kidney-shaped walnut with a hard pericarp, containing an oily and edible seed.
For its cultivation it should be taken into account that it can be carried out in climates with temperatures between 5 ° and 45 ° C with average productions between 15 and 30 kilos a year. To consider that in the producing countries instead of the seed the fruit is eaten. Cashew needs light, well-drained and sub-acid soils. The cashew tree suffers frost and does not withstand low temperatures. This is why cashew nuts are grown in tropical countries even if the plant is able to adapt in different climatic regions but within the two tropics. The cashew is multiplied mainly by seed and even if you use walnuts stored for at least 4-5 months there are no problems in germination (but the seeds should be kept in water for 1-3 days). Vegetation propagation, by air layering and grafting, is less practiced. After sowing (with 2-3 seeds per hole), the most robust plant is left. The sixths range from 10 to 12 meters or, as in Brazil, the dynamic sixth (6 x 6) is made with thinning after about ten years. The production goes from 4-5 years up to 30-35 years. Pruning is done only for the first two years to shape the plants. The tree is very demanding in light and does not bear fruit in the shaded foliage parts, it also has a strong resistance to drought
In the cashew cultivation technique the graft is used more than anything else to improve the adaptive capacity of the cashew tree but it is also used to increase yield and productivity in commercial orchards. Although the cashew plant can reach 12-14 meters in height, it is preferred to grow in nanized forms (no more than 6 meters) in order to have more productive yields and greater ripening speed.
Cashew uses are for drinks made from cashew apple pulp, cashew butter and cashew oil and its milk. In Brazil, during the period of production that goes from November to January, from the fruit, which has an acidulous and refreshing taste, a juice is extracted which, after slight fermentation, is drunk.
But from the cashew shell an indelible ink is extracted, besides the juice has a much appreciated antithermite power and from the same one obtains alcohol and vinegar and, after pressure, a valuable oil. Also from this plant we obtain a rubber and a milky liquid which are used as the basis for the paints. The juice has a blackish color and is resinous and extremely caustic and has medicinal uses.