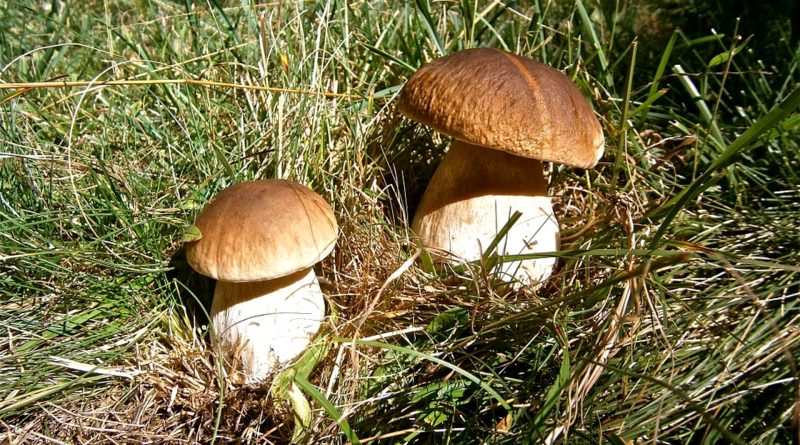 Systematics –
From a systematic point of view this fungus belongs to the Eukaryota Domain, Kingdom Fungi, Basidiomycota Division, Subdivision Agaricomycotina, Class Agaricomycetes, Sottoclasse Agariicomycetidae, Order Boletales, Family Boletaceae and then to the genus Boletus and to the species B. edulis.

Etymology –
The generic term derives from the Greek βωλήτης or βωλίτης and then from the Latin bōlētus (even if this term in ancient Rome indicated the Amanita caesarea which is a mushroom quite different from the Boletus); the term comes from the Latin edulis, ie edible, edible, for the exquisite edibility (edibility) of its flesh. The term porcino, with which this mushroom is commonly referred to is instead of uncertain origin.

Geographic Distribution and Habitat –
Boletus edulis grows routinely in the moors and woods of oaks, chestnut trees, beeches and conifers (excluding larch); the period of growth oscillates between summer and late autumn even if its production varies according to the seasonal trend (contrary to drought and low temperatures). 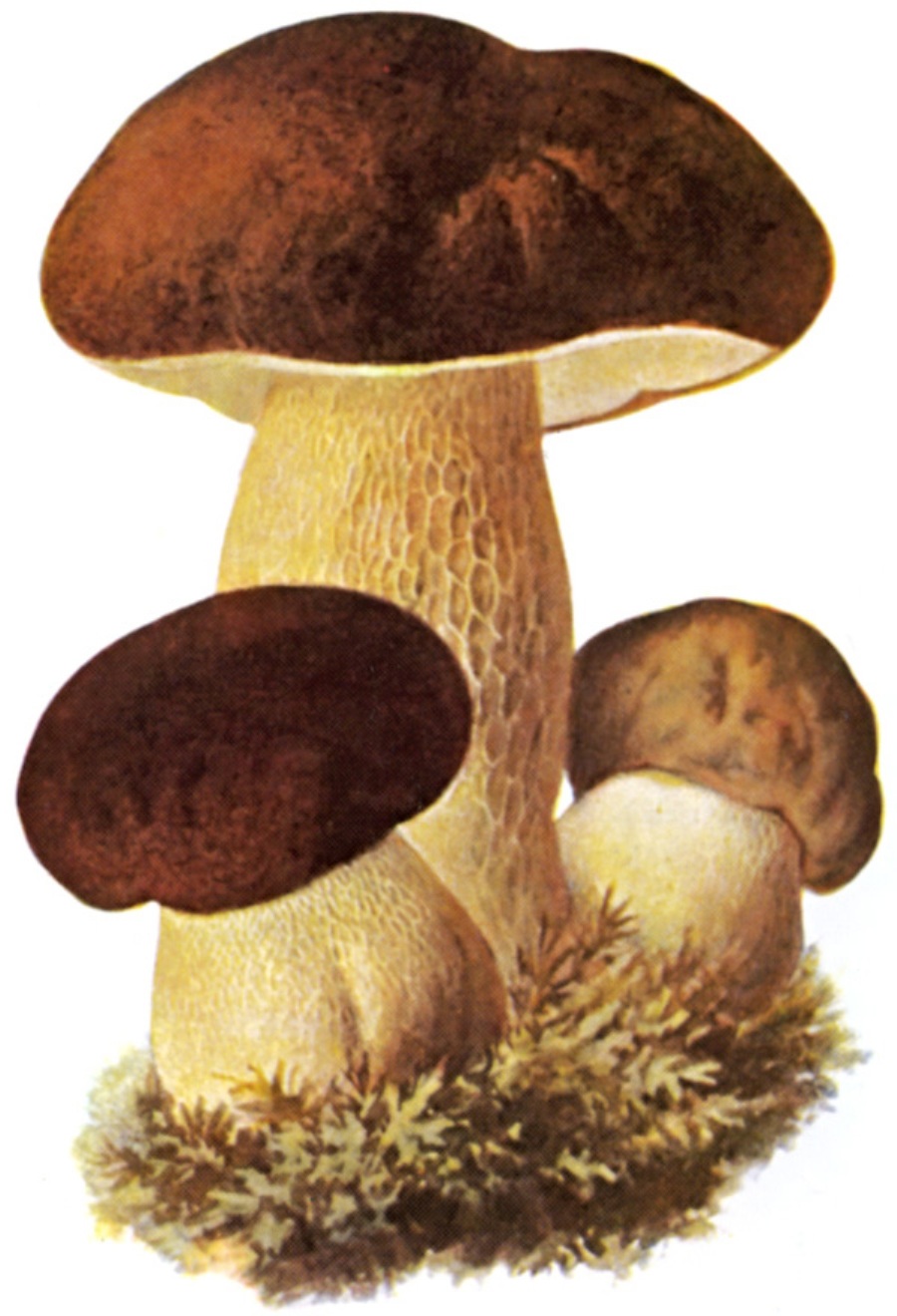 Description –
Boletus edulis hat with a velvety brown color has a width that can normally vary between 10 and 20 cm up to 30 cm in diameter; its shape is first hemispheric, irregularly lobed, in some cases not very developed with respect to the stem; subsequently it gradually becomes convex and regular. It has a cuticle separable only with flaps, smooth or wrinkled but slimy and shiny in the presence of wet weather with a color that varies from light yellow-brown to ocher or brown to white or white-to-oyster, up to a yellowish-green gradation or even greenish when it reaches maturity. The stem of Boletus edulis is light hazel. The pores of this species are small, round and of the same color as the tubules; these are long up to 30 mm, soft, easily separable from the cap, free or rounded to the stem, white in color and yellowish and finally greenish. The stalk of the porcino has on average a development of 15 x 10 cm, robust, obese, from gibbo to cylindrical, more reduced at the apex, compact, whitish or light hazelnut, with a fine and oblong mesh in the direction of the axis . The flesh of the Boletus edulis is of a whitish and unchanging color both of the hat and that of the stem; it is very firm in the young specimens while it becomes soggy and spongy in the old, with brown-purple hues under the cuticle of the hat. It has a pleasant smell, a sweet and particularly aromatic taste. Finally, the spores of this mushroom have a size of 14-17 x 4.5-5.5 μm, fusiform, smooth, brown-olive in bulk. Basidi are bi- and tetrasporic.

Edibility –
The edibility of this mushroom is one of the best in both the fresh and dried state. The yield of the dried mushroom is very high and its marketing takes place also in the form of powder or in dried fragments.

Cultivation –
The cultivation of porcini mushrooms is not a simple matter and can only be obtained through the mycorrhization, that is the technique used in agriculture and horticulture, which consists in transferring the roots of the fungus in a soil and creating a symbiotic relationship with other higher plants. . In the case of porcini mushrooms, for example, chestnut and oak trees are used, creating a symbiotic relationship between the fungus and the roots of the plants in such a way that the porcino can receive from the chestnut the nourishment necessary for its growth.
For the collection it is good to clarify (for a safeguard of the ecological balance) that it is not possible to use rakes or similar tools to move the underbrush in search of mushrooms. Help yourself rather with a simple wooden stick. Digging indiscriminately can damage the undergrowth and the reproduction of fungi. In fact, the regional laws for the regulation of mushroom picking often provide for the issue of a card or the payment of a small fee, for the purpose of environmental compensation.

Uses and Traditions –
The use of mushrooms has ancient origins but not always of a food nature. According to some findings it was possible to show that some of them were used to light the fire. Others were used as disinfectants and as medicines due to their antibiotic and antiseptic properties. Some cave paintings also show that the hallucinogenic properties of some species of mushrooms were known. For this reason they were employed in magical and religious rites. Later, in ancient Greece mushrooms became more important and considered more and more a symbol of life. In a legend told by the Greek writer Pausania it is said that Perseus, quenching his thirst from the water of a mushroom hat, decided to found the city of Mycenae, giving life to the famous and important Mycenaean civilization. Subsequently during the Roman period things changed radically and the mushrooms gradually became a symbol of death due to the bad experiences with poisonous mushrooms. Pliny the Elder tried to describe the dangerous effects in his “Naturalis Historia”. However, some considerations of Pliny were not entirely correct because he also placed the Boletes among the poisonous species. We must get to the sixteenth century to change the attitude with respect to mushrooms and therefore also with respect to porcini; it was during this period that the Italians Mattiolus and Hermolanus tried to classify mushrooms with increasingly scientific criteria. In the following centuries many scholars succeeded in debunking all the myths and legends associated with this extraordinary fruit of nature.

Preparation Mode –
The edible porcini, once collected do not undergo any treatment, so before you understand how to cook them you must be careful to clean them very well at home. The procedure should be done with a sharp knife, possibly with a smooth blade, removing the earth on the stem, scraping it with great delicacy. When the fungus is clean enough, the earth residues on the hat must be removed with a brush or a cotton cloth. At this point we must carefully separate the hat from the stem (better with a slight rotary movement).
Only if the fungus is still very dirty, but only in that case, pass it quickly under a jet of very cold running water (remember that in principle the mushrooms should never be washed, so if you are forced to rinse them do it very quickly and not never soak them). Finally, dry the mushroom perfectly with a cloth, so that no residual water or earth remains.
The cut is different depending on the type of preparation: if you must, for example, use porcini mushrooms as a seasoning for a first course, it is good practice to cut them to a thickness of about 0.5 cm; if instead you want to eat them alone, as a second course or as a side dish, the appropriate thickness is about 1.5 cm. As for the stems, these should always be cut for a long time.
After these operations porcini are ready to be prepared and cooked. It is advised to cook the head preferably whole to make better retain the juices. To obtain good results, the temperature of the oil is of fundamental importance: it must be sufficiently hot to allow the mushroom not to disperse the juices. Care must be taken that the color of the mushroom should not be “discharged” into the pan, but directly on the plate or in the mouth. Once the mushroom has “welded”, and you no longer risk losing its juices, you can add water to the cooking.
Porcini mushrooms combine very well with sweet and savory flavors, with meat, fish, vegetables and legumes; they are also tasty raw and delicate combined with other vegetables in salads. The list of pasta dishes to prepare with porcini mushrooms is practically endless: from the classic risotto with mushrooms and sausage, to the equally famous fettuccine, up to more particular preparations, such as lasagne with pumpkin and porcini mushrooms.