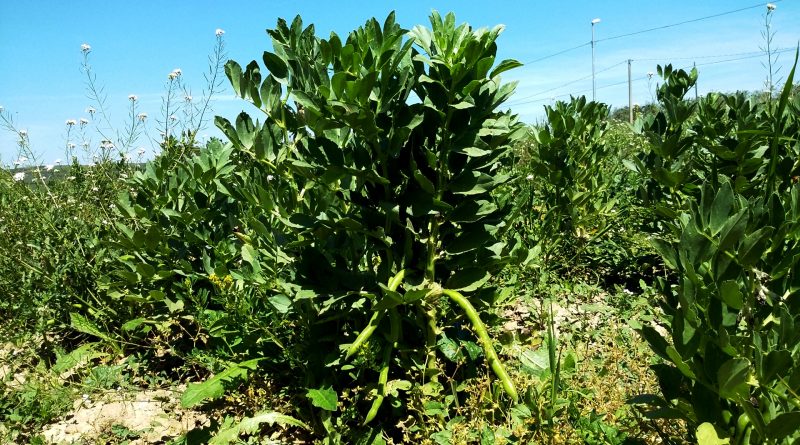 The broad bean (Vicia faba L., 1753) is a plant belonging to the Leguminosae family or Fabaceae which has been cultivated in Europe since ancient times.

Etymology –
The name of the genus comes from the lat. “Viere” or “vincire”, ie to tie, in reference to the majority of the species of the genus that cling to each other through the cirriums. The name of this species derives from the Latin făba; the term refers in particular to the fruits of this plant, which are edible.

Geographic Distribution and Habitat –
The broad bean is an annual plant of uncertain origin, cultivated since ancient times in all the countries of the Mediterranean basin and sometimes present in the subspontaneous state in almost all the regions of Italian peninsular and insular, especially in Mediterranean Italy. It is still grown in agricultural rotations to enrich the soil and edible legumes, which for millennia were a very important food for the poorer classes, so much so that they entered many aspects of folklore and literature, even in the common name “Fabio”. 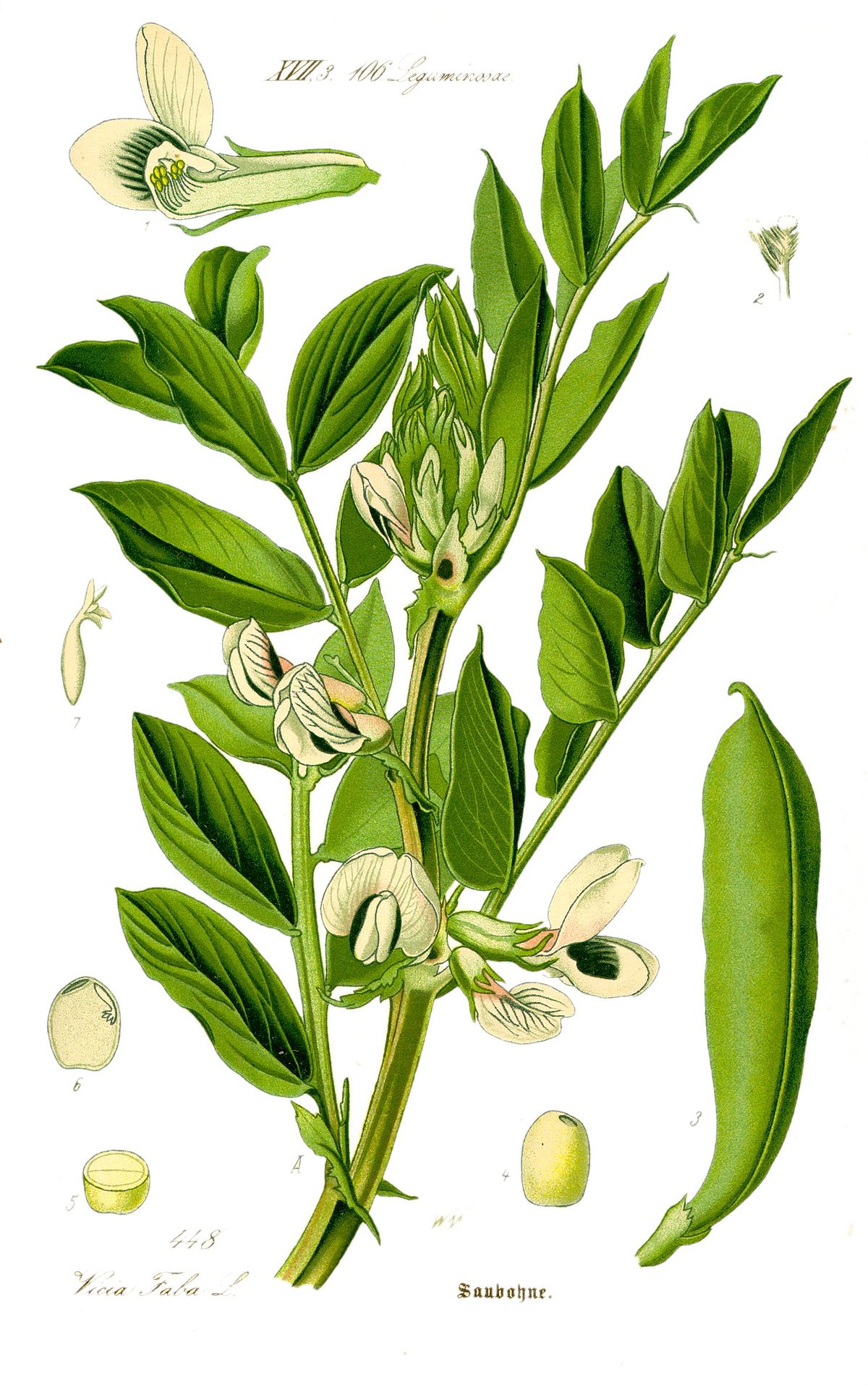 Description –
The broad bean has a fictitious root system, with numerous lateral ramifications in the first 20 cm that host specific nitrogen-fixing bacteria (Rhizobium leguminosarum).
The stem of this plant has a quadrangular section, hollow, branched at the base, with an indeterminate growth, from 70 to 140 cm high.
The leaves are stipulated, glaucous, pinnate-composed, and are made up of 2-6 elliptical leaflets. It has flowers collected in short racemes that develop at the axil of the leaves starting from the 7th node. Each raceme bears 1 to 6 pentameri flowers, with wavy flag, of white color streaked with black and white or violet wings with black spot. The fertilization of the plant is autogamous.
The fruit is an elongated, cylindrical or flattened legume, end to point, erect or pendulous, glabrous or pubescent which contains from 2 to 10 seeds with evident hollows, initially green and darker in color (from hazelnut to brown) when ripe.
Vicia faba L., in relation to the size of the seed, is distinguished in four botanical varieties:
Vicia faba var. paugyuga with very small seeds, of Indian origin, is not cultivated
Vicia faba var. minor Beck, commonly called favino, with a weight of 1000 seeds less than 700 grams and a short and short pod; it is used as forage or green manure;
Vicia faba var. equina Pers., commonly called favetta, with a weight of 1000 seeds between 700 and 1000 grams and a clavate and elongated pod; it is used as a forage;
Vicia faba var. major Harz. with large seeds, the weight of the 1000 seeds is more than 1000 grams, the pod is 15-25 cm long and is pendulous and flattened with 5-10 seeds. Fresh cultivars belong to this variety.

Uses and Traditions –
The Fava as a food plant has been used by man in the Mediterranean and Middle-Eastern areas in very remote times. Its origins could therefore be ascribed to this area.
In historical antiquity, throughout the Middle Ages and until the last century, dried broad beans cooked in various ways constituted the main food protein base of many populations, especially those of southern Italy. In recent times, consumption of dried seeds has been reduced, while the use of fresh or preserved or canned immature grains is still widely used in human consumption.
It is known that the consumption of beans was forbidden to the Pythagoreans, which could be linked to “favism”, a clinical manifestation characterized by a hemolytic crisis in response to the consumption of broad beans due to the lack of glucose-6-phosphate dehydrogenase, the enzyme defect most common in the human species. According to the legend, Pythagoras himself, fleeing from the antics of Cilone (of Crotone), preferred to be reached and killed rather than to be saved through a field of beans.
According to a popular belief popular in Italy, if you find a bean pod containing seven seeds you will have a period of great fortune.
However the broad bean was already cultivated in the Bronze Age, in ancient times it was known and appreciated, even if it was surrounded by “a macabre nomea”. In the ancient Hellenic peninsula it was believed that Ceres had donated to a city of Arcadia the seeds of all legumes except those of beans, which was linked to the superstition of “housing the souls of the dead”, a belief also corroborated by Pythagoras.
At the time of the Romans they were consumed according to the recipes of Apicius, who wanted them together with eggs, honey and pepper, before mixing them with herbs and sauces. Moreover, during the feasts dedicated to the goddess Flora, protector of the nature that sprouts, the Romans threw them on the crowd as a sign of good luck. But at celebrations, this legume was once again considered impure because it was used in religious rites as food for the dead, a custom similar to that of the Greeks.
Among the main properties and benefits, it should be remembered that the beans are rich in fiber, essential for the regulation of intestinal functions and contribute to the control of glucose and cholesterol levels in the blood.
Among the legumes appears to be the least caloric. In any case, the broad bean has a high nutritional value: it provides proteins, fibers, a wide range of vitamins (A, group B, c, e, K, pp) and mineral salts important for their action of drainage of the urinary apparatus such as phosphorus , potassium and calcium. The dried broad bean seeds have a high protein content: their average composition is in fact the following: 85% dry matter, 23-26% nitrogenous substances, 3% ashes, 1.2% fat, 7% raw fiber, nitrogen-free extracts 48%.
As mentioned above some predisposed subjects can not eat them, or even simply inhale the pollen of the plant in bloom, due to a hereditary pathology called “favism”, determined by the absence of an enzyme necessary to neutralize the harmful effects of some toxic substances present in beans.

Preparation Mode –
In human food the beans come in both as a fresh and dry product.
Among the most characteristic recipes of this seed we recall the macco of beans.
Between Puglia, Calabria and Sicily everyone has a way to do the macco.
It is difficult to find an agreement between fresh and dried broad beans. It is only simplicity, and at the same time the aromaticity of the macco that determines the success of this dish.
Soup or dressing for pasta: this is not clear either. Someone even makes meatballs that presents as fried macco.
However, both for the preparation of macco beans must be boiled quickly, coarsely chopped and then enriched with many variables: from chilli, to fennel or other aromatic additions (without ever forgetting a good extra virgin olive oil) that make it, from time to time. vault of typical and tasty dishes.
In Italian vocabulary it is stated that for macco, generically, it is “a living of shelled broad beans, boiled and reduced to pulp”.
For San Giuseppe, in Sicily (in some areas), in the macco, legumes and chestnuts also end up. Attention, not even with the saint the macco finds peace. Do not miss the use in some countries to add to the beetle beans and thistles and to call the whole soup of St. Joseph.
But the beans are also suitable for dry consumption with a bundle of dried beans, simply boiled and served at the table seasoned with oil and other spices. Among the uses of broad beans we remember the pasta with beans, some risottos and salads with variables that should be treated separately.