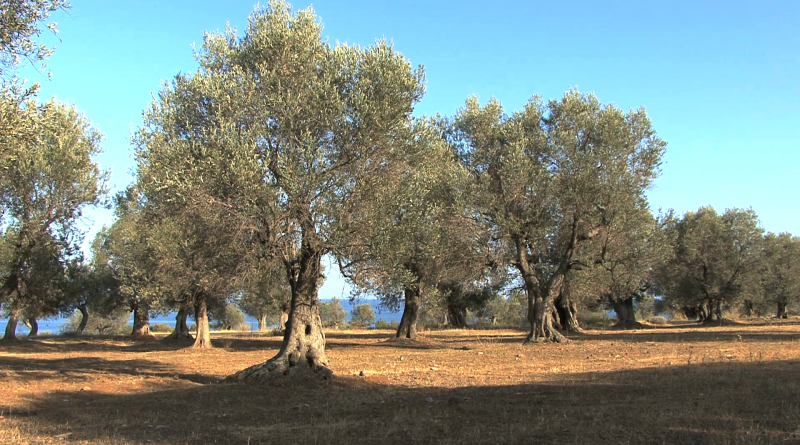 Olive or olive tree (Olea europaea L., 1753) is a long-lived medium-large fruit tree; you have specimens of over a millennium. Its fruits, olives, are used for extraction of oil and, to a lesser extent, for direct use in feed.

Systematic –
The systematic olive tree belongs to the Eukaryota Domain, the Kingdom Plantae, the Magnoliophyta Division, the Magnoliopsida Class, the Scrophulariales Order, the Oleaceae Family, and then the Olea Generation and the Specie O. europaea.

Etymology –
Olive and olive names derive from the Latin olīvum (from an ablative olīvī, olīvō of oleum) which in turn comes from the archaic Greek ἔλαιϝον élaiwon and the classical Greek ἔλαιον élaion; the present olive or olive shape is more frequent in Tuscany, but also diffused in other parts of Italy, although it is mostly used in poetical-literary fields; the olive form, which is prevalent in scientific literature, is typical of Veneto, Sardinia, Emilia-Romagna and northern Lazio; in the south of Italy, however, the terms aulivo, alivo, avulivo prevail. The specific term europaea derives clearly from its territorial diffusion.

Geographic Distribution and Habitat –
Olea europaea is a typically thermophilic and heliophilous species, it prefers dry, dry and dry climates and climates and is sensitive to low temperatures. This species vegetates in loose, coarse or shallow soils, with outlying rocky vegetation and fruit trees; is also one of the most tolerant species of salinity and can also be cultivated near the coasts from the sea level up to 900 m s.l.m. It is presumed to be originally from Asia Minor and Syria, because in this region the wild spontaneous wildlife is very common, forming true forests on the southern coast of Asia Minor. But the Greeks were aware of this tree to which they gave the special name of λαία that the Latins translated into olea. 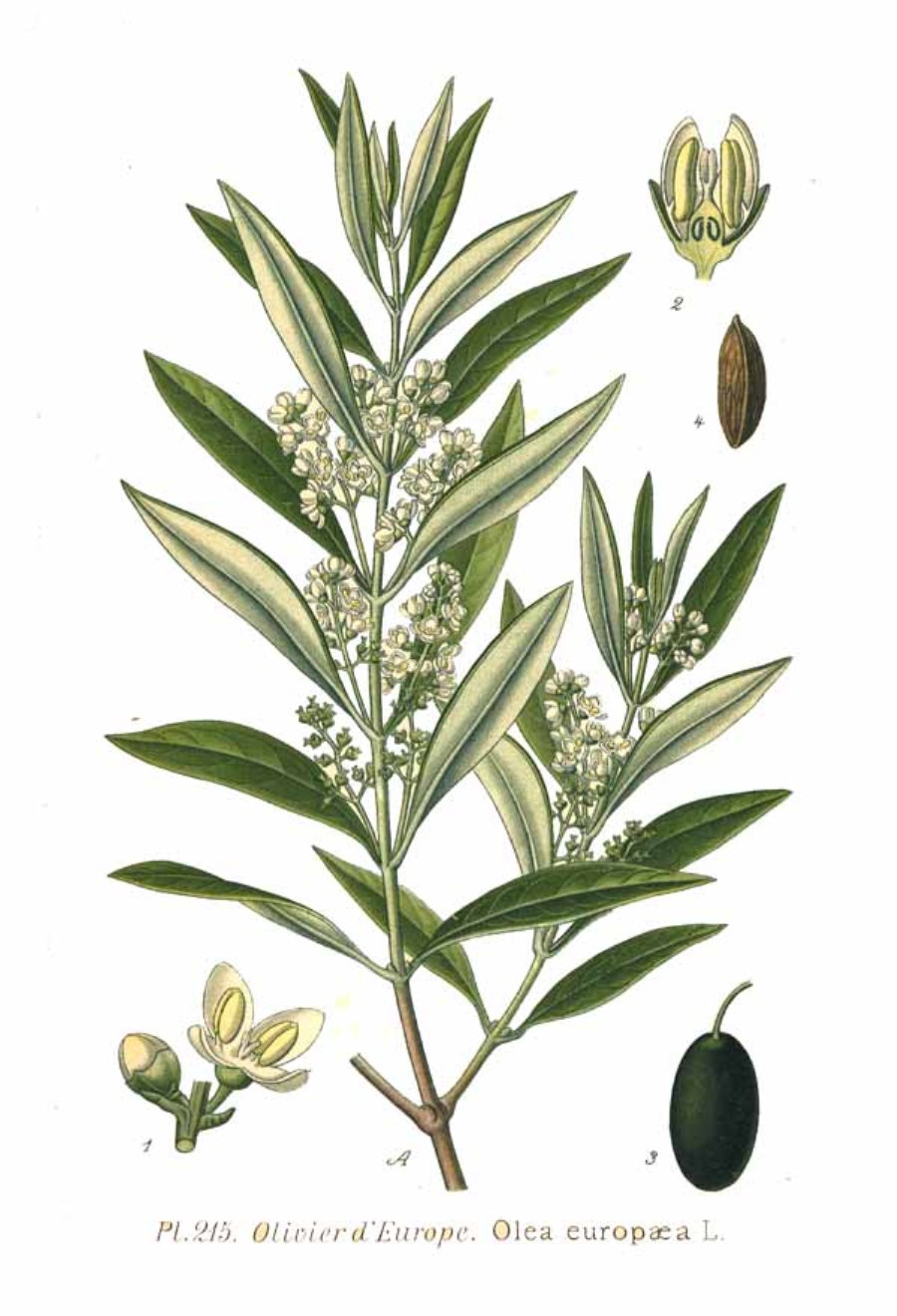 Description –
Although the origins of the Olive are still subject to debate among scholars, it is thought that the cultivated species is derived from selection and subsequent vegetative propagation from the wild or Olive grove, which is currently widespread in the indigenous state of the hottest coastal region of the overlook the Mediterranean. The Olivastre, which stands out to be spin-off and to have shorter leaves (<4 cm), is sometimes used as a rootstock for cultivated varieties and is mostly found in shrubland even though there are no impressive specimens and is one of the main components of Mediterranean scrub. When the grafted olive is cut, it frequently emits wild-type olives, that is, olivaste.
However, the olive tree is an evergreen and leafy tree whose vegetative activity is almost constant with attenuation in winter. It has a slow growth and is very long: in favorable climatic conditions an olive can become millenary, and reach heights of 15-20 meters. The plant begins to fruition towards the 3rd to 4th year, full productivity starts at 9th-10th year and maturity is reached after 50 years. The roots, mostly of advent, are expanded and superficial: generally they do not push more than 60-100 cm deep.
The stem is typically cylindrical and twisted, with a bark of gray or dark gray and hard and heavy wood. The plump form of the globose structures, called ovules, from which many basal pollen are emitted annually. The coat has a conical shape, with branches branching and pendulous or patented branches (arranged horizontally with respect to the stem) according to the variety. The leaves of this plant are opposed, coriacee, simple, whole, elliptical-lanceolate, with short petiole and entire margin, often revolving. The bottom page is of a characteristic white-silvery color for the presence of squamous hairs. Gems are mostly axillary.
The flowers of the olive are hermaphrodites, small, with four-seater chalice and corolla of white petals. The flowers are ordinarily grouped in number of 10-15 in cluster inflorescences, called mignoles. These are emitted at the aisle of the leaves of the sprigs of the previous year. Mignolatura starts in March-April. The actual flowering takes place, according to the cultivars and the areas, from May to the first half of June.
The fruit of the Olive is a globally, ellipsoidal or ovoid drum, sometimes asymmetrical, with a weight varying between 1 and 6 grams, depending on the variety, the cultivation technique adopted and the climatic trend. The harvest period, which depends on the cultivars and the use to be made: whether from oil or from the canteen is between October and December.

Preparation Method –
The use of olive oil in human nutrition is so rooted and diffused in different cultures that it is virtually impossible (if not in a specific discussion) to list all food uses and preparations.
Of course, the extra virgin olive oil is the most important use of this plant, together with the olives worked in various ways.
By leaving out the methods for the production of extra virgin olive oil, which for obvious reasons is difficult home preparation, we recall the various methods and all variants to prepare olives in brine, green or black, or crushed and ready after a few days out of bounds and uses straight to the pâté of olives (green or black).
Olive oil, which came back after the rediscovery of the Mediterranean Diet (recognized by UNESCO as well protected in the list of oral and intangible assets of humanity in 2010) is today one of the food grounds for the preparation of innumerable foods, both in raw cooked.
In recent years, however, they are recovering old uses such as:
the mother tincture of olive which is an excellent anti-cholesterol, antibacterial and antiglycemic, useful for heart, pressure and arteries;
the extract of olive leaves.
Their therapeutic uses are varied and are related to substances such as saturated and unsaturated fatty acids; triterpenes, flavonoids; oleoresins and elenoids. Leaves, used to make mother dye, have anti-glycemic properties, anticholesterol, help regulate blood pressure, lowering it, as they have a diuretic and vasodilatory effect. In particular, they are the tetronic glucosides (elenolide and oleuropein) acting as hypotensives and vasodilators.