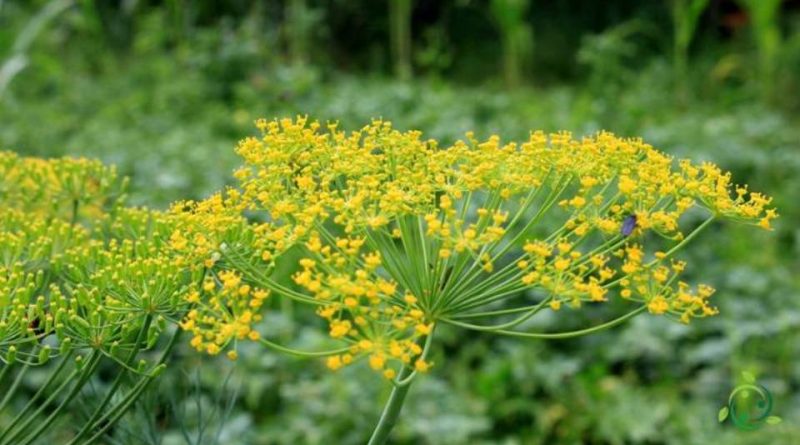 Dill (Anethum graveolens L.) is a herbaceous plant of the Apiaceae family.
It is an annual herbaceous plant native to southwestern Asia.
Dill is an aromatic herbaceous plant that has spread throughout Europe and even in Italy, where it is grown as an annual or biennial like fennel and anise.
Pollination of dill is guaranteed above all by various insects, such as bees and wasps as it is a nectar plant with entomogamous pollination.
Fertilization therefore takes place through pollination of the flowers, without which the production of seeds becomes very deficient.
The flowering of the dill takes place from June until the end of August.
The inflorescences have the shape of large umbels which are in turn divided into other small umbels.

Propagation –
Once the individual inflorescences have gone to seed, they can be cut and placed in a suitable place to store them and thus be able to use the seeds for the following year.
The whole umbrellas are hung upside down by spreading a cloth underneath, in order to recover the grains (seeds) as they fall.
Once all seeds have been collected, they must then be placed in a dry and dark place and, possibly, out of heat sources; even better if cold in order to have a good vernalization of the seeds which will then favor a more vigorous germination.
Dill sowing can be done directly broadcast and outdoors, on medium organic soil and in a sunny place. Later you can thin out if the seedlings are too dense. It is advisable to irrigate periodically and free the soil from weeds.
For the details of the cultivation technique, refer to the following sheet.