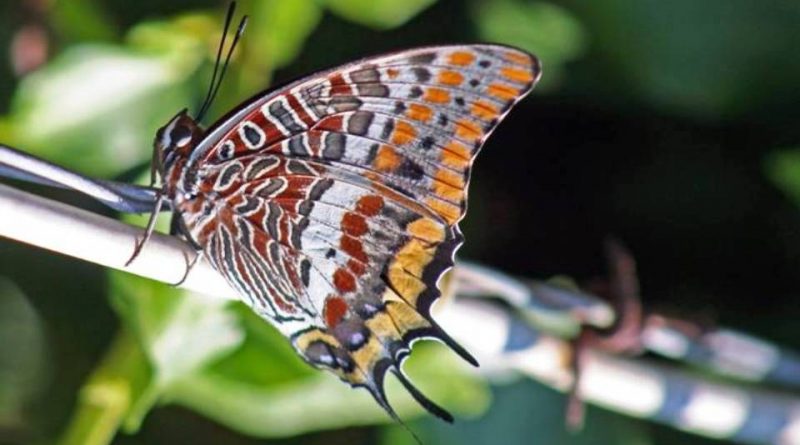 The two-tailed pasha (Charaxes jasius (Linnaeus, 1767)) is a moth belonging to the Nymphalidae family.

Geographical Distribution and Habitat –
The two-tailed pasha is a moth widespread along the coast of the Mediterranean basin and in sub-Saharan Africa.
In Africa, it has been found in North Africa, Senegal, Gambia, Guinea-Bissau, Guinea, Mali, Sierra Leone, Liberia, Ivory Coast, Burkina Faso, Ghana, Togo, Benin, Nigeria, Niger, Cameroon, Gabon, Republic Central African, Congo, Sudan, Uganda, Ethiopia, Somalia, Kenya, Tanzania, Malawi, Angola, Zambia, Mozambique, Zimbabwe, Botswana, Namibia, South Africa and Swaziland.
In Europe, however, it is present in an area ranging from the coast from western Portugal to the coastal islands of Greece (with the exception of the coast of the northern Adriatic Sea from the central peninsula of Italy to Istria) and the coast of southern Anatolia including Samos , Ikaria and Rhodes.
Its diffusion area includes the Balearic Islands, Corsica, Sardinia, Corfu and Crete. Inland, the butterfly is found locally in Spain from Huelva and Malaga to Madrid and Salamanca. In France, the butterfly is found isolated in the hinterland of Provence in Lozère, Ardèche and Ayeron.
Its typical habitat is that of the Mediterranean scrub where it lives and reproduces up to 700-800 meters above sea level.

Morphology –
The two-tailed pasha is a medium-large moth, with a wingspan of 70 – 80 mm.
The dorsal part of the wings are dark brown with orange margins. The hind wings carry the two tails to veins 2 and 4, characteristic of most of the species of the genus.
The ventral part of the wings is reddish brown with numerous darker bands surrounded by white or gray. The orange marginal band is also present on this and is preceded by a submedian white band. Near the tails there are some blue points.
The caterpillar is recognized for its cylindrical shape with the presence of two yellow ocelli on the back. The head wears four horns facing backwards.
The pupa has a compact conformation and remains hanging from the host plant.

Aptitude and biological cycle –
The Charaxes jasius is a butterfly with a very marked territoriality: especially in the reproductive period when the male individuals defend and patrol a very large territory, showing a remarkable aggressiveness towards the other butterflies.
This moth is a bivoltine species, which therefore presents two generations per year, with the first between May-June and the second in the period between August-September. The second generation then spends the winter at the larval stage, to flicker in the following spring.
The female lays her eggs on the upper page of the leaves of the strawberry tree, laying no more than one egg per leaf.
The larva emerges from the egg, which builds a sort of bed with silky threads, to which it returns punctually after feeding on the surrounding leaves.
As the size increases, the caterpillar undergoes repeated moulting, at the end of which it hangs on a twig, curving itself into a hook and gets stuck. After a period that can vary from two weeks to a month, the pupa opens letting the butterfly come out.

Ecological role –
The two-tailed pasha is the only European representative of the genus Charaxes which, for the rest, is widespread especially in the tropical belt of the Old World.
This moth, in Italy, during the larval phase feeds exclusively on the leaves of the strawberry tree plant (Arbutus unedo), hence its common name while the adult prefers ripe fruits, of which it sucks sugary liquids.
In the other areas where the larvae are present, they feed on a wide range of plants, including Afzelia quanzensis, Annona (including Annona cherimola), Arbutus unedo, Bauhinia (including Bauhinia galpinii and Bauhinia petersiana), Berlinia, Brachystegia (including Brachystegia edulis and Brachystegia spiciformis, Burkea, Cassine, Catha edulis, Celtis africana, Colophospermum mopane, Copaifera baumiana, Croton, Daniella oliveri, Guibourtia conjugata, Gymnosporia (including Gymnosporia senegalensis), Hibiscus, Isoberus, jalberia, Senegal African, Protea, Prunus persica, Pseudocedrala, Schotia brachypetala, Sorghum (including Sorghum roxburghii), Vaccinium corymbosum, Xanthocercis zambesiaca and Xeroderris stuhlmannii.