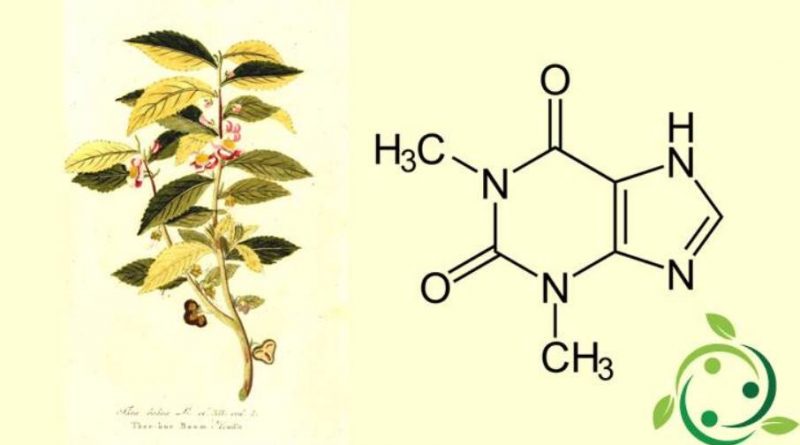 Theophylline or dimethylxanthin, whose term in the official IUPAC nomenclature is: 3,7-Dihydro-1,3-dimethyl-1H-purine-2,6-dione is a chemical compound belonging to the group of alkaloids, with brute or molecular formula : C7H8N4O2.
Theophylline is a basic nitrogen compound (member of the xanthine family) of natural origin, produced by some plant species, and very similar, from a structural and pharmacological point of view, with caffeine and theobromine.
More specifically, it is a methylxanthin and as a drug it is used in the therapy of numerous respiratory diseases, such as COPD and bronchial asthma, with various commercial names.
Theophylline, in nature, is mainly contained in the leaves of the tea (Camellia sinensis (L.) Kuntze), although in traces (~ 1 mg / L) significantly lower than the therapeutic doses. The substance is also contained in small quantities in coffee, cocoa beans and guarana.
Higher concentrations have been found in criollo cocoa beans, a high-quality cocoa, which is the most widespread in Central America and northern South America.
Theophylline is an alkaloid that is mainly used as an antiasthmatic drug, but the unfavorable risk / benefit ratio makes it a secondary option compared to more effective and safer drugs.
As for the presence of theophylline in the tea, the concentration of theophylline is highly variable in relation to the type of tea, the variety and duration of the infusion.
On average, black tea mainly contains caffeine, also called theine (2.5-5.5% on the dry weight), while theophylline is present in limited concentrations (0.002-0.013%).

Therefore, unlike what is believed, tea brings good doses of caffeine (about 20 mg per 100 ml), but its content in theophylline is somewhat reduced (about 1 mg in a 150 ml cup of very strong black tea, up to less than 1 mg / L in infusions prepared with leaves of the most delicate varieties). Regardless of the source, the concentrations of these two alkaloids are the greater the more the leaves are kept in the infusion.
Among the main properties of theophylline we mention its diuretic and relaxing action on smooth muscle, in particular on that of the bronchi.
In addition, as mentioned, theophylline is useful against asthma; it follows a positive activity on respiratory problems of various kinds, such as asthma and bronchitis. This therapeutic activity is carried out at different levels and leads, among other things, to an increased contractility of the diaphragm and other respiratory muscles.
Among the theophylline derivatives, some are used in the treatment of bronchial asthma. The best known and used is Aminophylline (resulting from the combination of theophylline with ethylenediamine), the antiasthmatic action of which derives from the blockage of phosphodiesterases (with consequent increase in intracellular concentrations of cyclic AMP), from the increased release of catecholamines, by the inhibition of adenosine receptors and by the regulation of cells with pro-inflammatory activity. Another particular therapeutic indication of theophylline is represented by neonatal apneas.